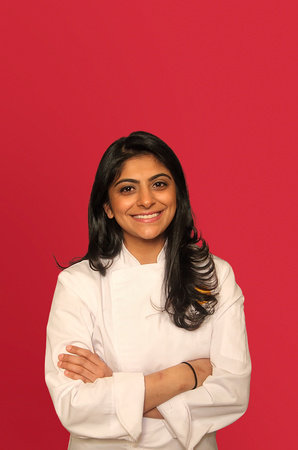 Born in Pakistan, Fatima Ali was an award-winning chef in New York City. Her ambition, conviction, and drive led Fatima to break many conventional boundaries during a time when a career in the kitchen wasn’t seen as an option for a young woman like her. After graduating as class valedictorian from the Culinary Institute of America, Fatima worked her way through multiple restaurants, ultimately becoming the youngest executive sous chef at Stella 34 and La Fonda del Sol.

When Fatima was just twenty-three, she competed in and won an episode of Chopped on the Food Network—the first Pakistani and the youngest contestant to do so at the time. Later she starred in a Munchiesepisode for VICE and began to gather a significant following from around the world through her sporadic appearances on TV. Another competition success with Chef’s Roll sent her to Napa Valley to work at the three-Michelin-star The Restaurant at Meadowood.

Fatima went on to win the world’s hearts as a contestant on the fifteenth season of Bravo’s Top Chef—again, she was the first Pakistani woman on the show and went on to be voted “Fan Favorite.” Unfortunately, shortly before the show aired, Fatima was diagnosed with Ewing’s Sarcoma, interrupting her journey and derailing her trajectory just as her star was rising. After a sixteen-month-long battle, Fatima took her leave on January 25, 2019. She wrote several essays for Bon Appétit, one of which was posthumously awarded a James Beard Award.

Before she said goodbye, Fatima made plans. Plans to spark curiosity about Pakistani food and help people value and see themselves in her culture and country. Plans to hold the doors open for other brown women to chase their dreams and believe in themselves the way she did. Plans to make everyone understand the importance of leading with love, to live without fear, to have a vision and bet on yourself to get there. Gone far too soon, and missed dearly by her loved ones and fans throughout the world, she shares with us her story and how it came to be.