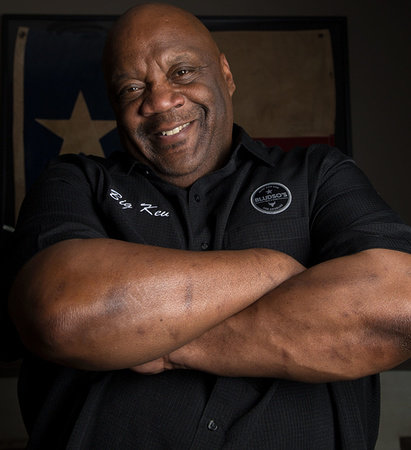 Kevin Bludso is a chef, television personality, and two-time Steve Harvey Neighborhood Award winner. In 2008, he opened Bludso’s BBQ in Compton, California, and it has since grown into an international empire, with a flagship restaurant, Bludso’s Bar & Que, in Hollywood, a concession stand at the LAFC soccer stadium, a location in Proud Bird by LAX, and a sprawling restaurant and bar called San Antone by Bludso’s BBQ in the Crown Casino in Melbourne, Australia. He is returning for a second season as a the star of Netflix’s hit BBQ competition show The American Barbecue Showdown, and has multiple television appearances on shows such as Diners, Drive-Ins and Dives and Bong Appétit, and as a recurring guest judge on Bar Rescue. Kevin currently resides in Corsicana, Texas, regularly traveling both nationally and internationally for his pop-up events and television appearances.