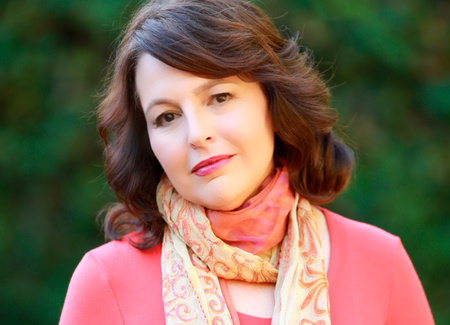 Nina Sadowsky has written numerous original screenplays and adaptations for such companies as The Walt Disney Company, Working Title Films, and Lifetime Television. She was president of Meg Ryan’s Prufrock Pictures. She was the executive producer of The Wedding Planner and has produced numerous other films. She also served as president of production for Signpost Films, where she worked on such movies as House of Sand and Fog. Sadowsky is currently an adjunct professor at the USC School of Cinematic Arts, teaching both script development and producing. This is her first novel.

Nina Sadowsky has written a number of original screenplays and adaptations, and was a producer on the Academy Award-nominated 2003 film “The House of Sand and Fog.” Her cinematic background jumps off every page of her debut novel, Just Fall. A descendant of Gone Girl with a heart all its own, Just Fall tells the tale of Ellie and Rob Beauman, whose lives spiral out of control on their wedding day in ways neither of them could ever have imagined. We sat down with Nina Sadowsky to discuss screenwriting versus novel writing, her greatest influences, and the enticing problem of the morally ambiguous character.

PENGUIN RANDOM HOUSE: If readers of Just Fall don’t know of your background in film before picking up the book, they certainly will after reading the cinematic first chapter. Were you conscious of bringing your experience in film to your novel writing?

NINA SADOWSKY: As a filmmaker, I always strive to fill each inch of the frame with storytelling, actively strategizing about how every aspect of production can contribute to the final image. A script is a road map. The director, actors, locations, lighting, camerawork, production design, wardrobe, makeup and hair, etc. — every choice made springing from the road map that is the script should ideally advance the storytelling in its translation to a visual medium. When I started each chapter of Just Fall, I closed my eyes and conjured an image, thinking about the scene from all of those different perspectives. My goal was to tell the story as visually as possible through the use of language.

PRH: In what ways did your writing process differ when writing a book as opposed to writing for the screen?

NS: The fact that film is collaborative and that all those other voices contribute to the final product is probably the single biggest difference in writing for film and writing a novel. I had valuable feedback on the book from my early readers and from my excellent editor, but at the end of the day the work was more profoundly and purely mine than anything else I’ve ever worked on. Film and television scripts also adhere to highly codified structures. I found a delightful freedom in playing with structure while writing Just Fall, hence my decision to have a linear through line in the “NOW” chapters of the book, and a nonlinear structure for the “THEN” sections.

PRH: Just Fall is your debut novel, but you’re no stranger to the printed word; you were an executive producer on “House of Sand and Fog,” adapted from Andre Dubus III’s novel of the same name. Did your work on that adaptation influence your approach to writing Just Fall?

NS: To clarify my involvement, I was the President of Production at an international film finance and distribution company that acquired the rights to “House of Sand and Fog,” not its EP. We bought the project in my first week in the job and I was thrilled we landed it. Unfortunately, that company went under before the film was finished. I did work on the project through pre-production, so was involved in the adaptation (and was heartbroken I couldn’t see it through to the end).

However, in response to your question about approaching the adaptation, I felt it crucial we remain faithful to the heart and spirit of the book. It’s such a powerful story and touches on so many resonate themes. Any book adaption is challenging for a number of reasons. For one, film as a medium does not lend itself easily to interior monologue, so the storytelling can’t rely on what people are thinking. In addition, books usually need to be condensed, corralled, and contained to fit mandated film or television structures. But I think an adaptation is a success when the soul of a book is captured, and we certainly strove to accomplish that with “House of Sand and Fog.”

PRH: What where your greatest influences, from film, literature, or otherwise, while writing this book?

NS: I’ve been a mystery/thriller fan since I devoured my first Agatha Christie, who led me to Dorothy Sayers, P. D. James, Sir Arthur Conan Doyle, Mickey Spillane, Michael Connelly, Sue Grafton, Patricia Highsmith, Kate Atkinson … the list goes on and on. When I decided to write a novel, it was a natural genre choice.

Some of my favorite filmmakers are Alfred Hitchcock, Stanley Kubrick, Martin Scorsese, Francis Coppola, Danny Boyle — all masters of controlled tension in stories that seem simultaneously larger than life and completely relatable. They certainly influenced me in my quest to make Ellie, the protagonist of the thriller, a kind of “every woman.” Not a femme fatale, not a good-girl-gone-bad, but a woman with whom most people could identify, even as she committed terrible acts. I’ve always also loved the noir genre, with its stark examination of moral ambiguity. I believe these kinds of stories are how we process our fears about a violent, often senseless world. I can also confess that while all my characters are pure fiction, some of them were inspired by some less-than-savory people I’ve encountered in Hollywood.

PRH: As a psychological thriller, Just Fall is built on a complex structure in which you not only alternate between the past and the present chapter by chapter, but you also alternate between a handful of different narrators. This must have involved quite a bit of forethought in terms of mapping out when and how you wanted to drop important hints and plot points. Did you use any specific tactics to keep track of it all? Did you have a clear idea of how you wanted the story to unfold when you started writing?

NS: Index cards! Old school, but essential to my process. They occupied our dining room table for weeks on end. I started the book with just an image, a scribble in my notebook that became the first chapter. I didn’t begin outlining until I was about a third of the way in, but then those index cards became essential. And I must have reworked the structure dozens of times in order to maximize both tension and character illumination.

PRH: The marriage at the center of Just Fall calls to mind recently explosive marriage thrillers Gone Girl, The Widow, and even the somewhat lighter fare of The Husband’s Secret. What do you think draws people to these stories? What drew you to them?

NS: I believe there are some universal themes that speak to almost all of us. The need for love, issues of trust, the fear of being alone, or the fear of making a mistake about with whom we allow intimacy — these themes resonate broadly across multiple demographics, as evidenced by their repeated exploration in literature and film.

Just Fall came out of a very personal examination of those themes. The book was hatched very soon after my second marriage, at a time when my new husband and I were in a very fragile place. We were blending four teenagers into our newly constituted family and it was not going well. I had been married only a few months but feared we were on the verge of collapse. Writing Just Fall helped me process my fears and push through them as we sorted it out, which I’m happy to report we did.

One of my basic tenets of storytelling is to identify which universal theme one wants to explore and then determine what one’s unique experiences and perspective can bring to its realization. I teach my film students this and it was certainly true with Just Fall. I wanted to explore the excitement, hopes, and fears that come along with falling in love and delve into the perils and pleasures of intimacy – all of which I was experiencing – but within the high stakes and drama that are inherent in the thriller genre. Those universal emotions were filtered through both my personal experience and my love of the genre.

PRH: The characters in Just Fall commit horrific crimes, and time and again your readers are faced with a moral quandary: Do these characters deserve to be saved? Without giving too much away for those who haven’t yet read Just Fall, how do you think readers will respond to your characters? Did you learn to love them despite their flaws?

NS: Of course I love my characters, they are all pieces of me to some degree. But I love this question, because that is exactly the pool into which I wanted to dive. We live in a world that is increasingly rife with moral ambiguity. Our planet is riddled with an ongoing legacy of those who justify hatred, brutality, genocide, repression, and torture. We’re frequently confronted by questions that ask us to consider when and if it’s acceptable to do the wrong thing for the right reasons. We also have to confront the fact that all of our moral lines can shift depending on the circumstances. The question “What would you do if … ?” can generate a very different response if followed by “it was your mother, or your child,” or in Ellie’s case, “her husband.”

With Just Fall, I wanted to push these boundaries and ask readers to question their own moral lines. I hope that readers can recognize themselves in the characters and understand them despite the terrible things they do because the characters are on the real and relatable emotional roller coaster that comes along with true intimacy, even if their experiences are set within a kind of a pulp fiction, a lurid fever dream. One early reader said the book made her ask: “Who around me could be a murderer? Maybe I don’t have to look any further than my mirror.” I loved that reaction.

PRH: Just Fall ends with much left unresolved. Do you have any plans for a sequel that you can tell us about? Anything brewing in the film world?

NS: My next thriller, The Burial Society (also for Ballantine), is a standalone with entirely new characters. So as I am finishing that book, I am currently falling in love with all of them. I would like to return to the characters in Just Fall, not only Rob and Ellie, the newlyweds at its center, but also the detective, Lucien Broussard, at some point down the line as I don’t feel I am quite finished with them, nor they with me.

As for an adaptation of Just Fall, things are brewing and I expect to make an announcement soon!