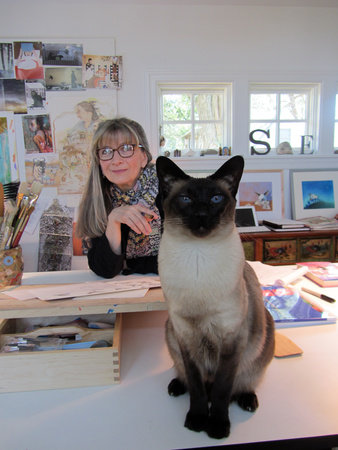 Best known for her Skippyjon Jones series, Judy Schachner has illustrated many of her own stories, including the much-loved Grannyman and its companion book, Bits & Pieces. A #1 New York Times Bestseller, Judy is also known for her spirited reading of the Skippyjon stories, for which she won the first E. B. White Read Aloud Award. She lives in Swarthmore, Pennsylvania.

What inspired you to create the character Skippyjon Jones?
My very own cat Skippy inspired these books, as well as my brother Kevin, Antonio Banderas, and the teeny, tiny, trembling Chihuahua deep down inside of me.

Skippyjon Jones has an active imagination. What is the best thing parents can do to encourage their children to imagine?
The best thing a parent can do for a child is to give him/her the time to use their imagination. Pure, unadulterated, un-programmed, unplugged time. Sprinkle in lots of hugs and kisses and mix with a healthy dose of snuggles and books.

Are family and friends represented in the characters you create?
Absolutely. I believe in exploiting family, friends and pets for fame and fortune. Both my girls were tom boys when they were little. Sarah, the younger was a combination of Superman and John Lennon of the Beatles. She flew around town in a gold lame cape and yellow swimming goggles which squished her eyes close together. Emma was an American red fox and a Viking explorer. Yo Vikings was a book written about them, and it is based on a true story. My husband makes an appearance in The Grannyman. He is wearing pink pajamas. The people who rode the train to work with him everyday gave him a hard time. Hee, hee, hee!

Do you have any pets?
I currently have two cats named Skippy and Tink and one dog we rescued named Buster. They love ice cream but they cannot read.

Skippyjon Jones is a Siamese cat who believes he is a Chihuahua. When you were a kid what characters and creatures did you pretend to be?
I have never been comfortable in my own skin. I much preferred living in the skin of Patti Paige, My Little Margie, Shirley Temple, Davy Crockett, Roy Rogers and Dale Evans, and Dr. Kildares’ love interest. But most of all I loved inhabiting the characters of Dorothy and Toto. Today I am a Chihuahua as old as Monte Zuma with no plans to enter either a kennel or a convent.

How did your imagination and artwork help you cope with some of the difficulties in your childhood?
Imagination sustained me through a painful childhood of poor report cards and personal loss. I could always draw myself into a world in which dreamers ruled and mothers never died.

You incorporate some Spanish into your Skippyjon Jones books. Do you feel it is important for children to begin learning a second language at an early age?
I so regret never learning a foreign language. Children should start in kindergarten. I’m sure it would lead to a more tolerant world.

What future adventures will Skippy and his imagination take readers on?
Skippyjon Jones and I are currently in his closet working on a new sequel titled Mummy Love.