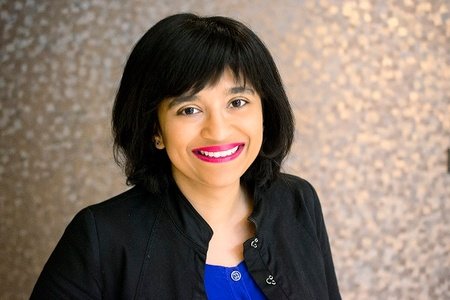 New York Times bestselling author Nalini Singh is passionate about writing. Though she’s traveled as far afield as the deserts of China, the Highlands of Scotland, and the frozen landscapes of Antarctica, it is the journey of the imagination that fascinates her most. She’s beyond delighted to be able to follow her dream as a writer.   Nalini lives and works in beautiful New Zealand. You can contact her directly through her website. While visiting the site, Nalini invites you to join her newsletter for up-to-date news about both the Psy-Changeling and Guild Hunter series, as well as fun exclusive extras, including free short stories set in her worlds.

Quiet in Her Bones

In some ways, Branded By Fire was both the easiest and the hardest book to write in the “Psy/Changeling” series to date.

The reason why is that Mercy and Riley have been an integral part of the series from the very beginning. I wanted to do justice to their story, while staying true to their characters. That was critically important to me—I didn’t want them to be different from the two strong, intelligent changelings we’ve come to know, but I also wanted to see below the surface of their personalities.

I tell you—getting these two to open up was beyond difficult! Yet in spite of that, or perhaps because of it, I utterly enjoyed the ride. Mercy and Riley are such fantastic characters that spending time with them was a joy. Each time the two met on the page, sparks flew. I was half worried my laptop was going to go up in flames!

This is the most sensual Psy/Changeling book to date, and that flows from the characters. Unlike their Psy counterparts, changelings are not only far more tactile, touch is deeply necessary for them. As a result, the physical side of Mercy’s and Riley’s relationship comes much more easily than the emotional.

But of course, when two changelings touch, it isn’t only about the physical.

This is particularly true for Mercy and Riley. Each time they share their bodies, it’s a step into trust, a trust that is by no means simple—because they aren’t just two people who happen to be attracted to one another. Mercy is a DarkRiver sentinel to Riley’s SnowDancer lieutenant, leopard to his wolf.

I think because of that combination of factors, Branded By Fire is a strong, vital addition to the series, and one that takes us deep into the heart of both DarkRiver and SnowDancer. It’s also a story that took me by surprise—when I began this series, I didn’t see Mercy and Riley together. Sometimes, characters take a new direction and the writer must follow—and now that I’ve written their story, I know it could have been no other way. These two are perfect for each other—both as stubborn, as wild, and as willing to love with all their heart and soul.

I hope you feel the same way after you read their story. As always, don’t hesitate to drop me a note if you have any questions.