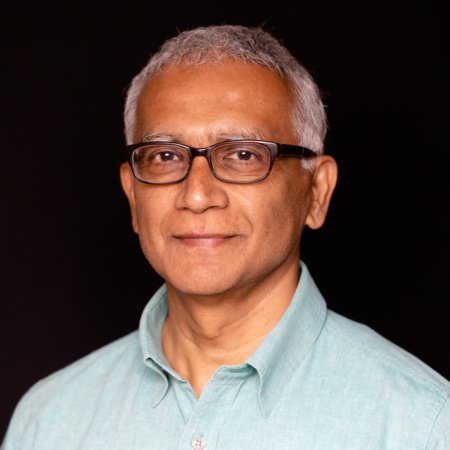 Anil Ananthaswamy is an award-winning journalist and former staff writer and deputy news editor for the London-based New Scientist magazine. He has been a guest editor for the science writing program at the University of California, Santa Cruz, and organizes and teaches an annual science journalism workshop at the National Centre for Biological Sciences in Bengaluru, India. He is a freelance feature editor for the Proceedings of the National Academy of Science’s Front Matter. He contributes regularly to the New Scientist, and has also written for Nature, National Geographic News, Discover, Nautilus, Matter, The Wall Street Journal and the UK’s Literary Review. His first book, The Edge of Physics, was voted book of the year in 2010 by Physics World, and his second book, The Man Who Wasn’t There, won a Nautilus Book Award in 2015 and was long-listed for the 2016 Pen/E. O. Wilson Literary Science Writing Award.

Through Two Doors at Once

The last line of science journalist Anil Ananthaswamy’s The Man Who Wasn’t There reads, “The malady is the self.” But the journey begins elsewhere. With eight chapters exploring untypical selves, it is a lineup of characters suffering from self-unmaking maladies, autism, depersonalization, schizophrenia, epilepsy among them: From where do the outside voices that no one but a subject with schizophrenia can hear come? Why would a man insist his right leg is no part of him at all? Can autism be re-thought of as the inability to form an internal sense of one’s own body in space?

The answers, Ananthaswamy proposes, lie in the many landing spots between neuroscience and philosophy. Medical procedures shine one brand of light, finding brain structure, tumors, and injuries, but then give way to an examination of the idea of self. While deeply altering neurotypical selfhood, none of Ananthaswamy’s examined conditions impair a subject’s ability to be the center of experiences. Add to that science the Buddhist notion that “the self is impermanent, fluctuating,” and what Ananthaswamy stirs up is a brave journey into our many kinds of selves. Below is our conversation with him about some of the stops along the way.

PENGUIN RANDOM HOUSE:Your book deals with some fascinating neuro-phenomenon, Cotards’s syndrome, Alzheimer’s, body integrity identity disorder, schizophrenia, and autism among them. As a sneak peek for our readers, what do these conditions have in common enough to be gathered together here?

Anil Ananthaswamy: All these conditions change the way we feel about ourselves. In other words, they change our sense of self, but each in a different way. For instance, people suffering from Cotard’s syndrome claim that they don’t exist, that they are dead. People suffering from Alzheimer’s start losing their memory, which is an important component of our narrative self, the story we tell ourselves and others about who we are. So, by examining how the self is altered by these various conditions, it’s possible to gain some insights into how the brain constructs various aspects of our sense of self.

PRH:What are your thoughts on neurotypicals learning to understand and interact with non-typical minds?

AA: I think it’s important that each of us makes an effort to understand what it must be like for people suffering from, say, schizophrenia or autism. To start with, we must become sensitive to the fact that no matter how serious the condition, there is a person who is suffering. So, instead of saying that someone is a schizophrenic, it behooves us to think of someone suffering from schizophrenia. It’s a subtle but important distinction to keep in mind if we are going to understand each other’s realities. To paraphrase philosopher Nicholas Humphrey’s comments about my book (he said it better than I could), I think we need to make sense of each other’s “otherness,” while holding on to our human sameness.

PRH: Doctor and philosopher William James’s notion that, “We feel sorry because we cry, angry because we strike, afraid because we tremble, not that we cry, strike, or tremble, because we are sorry, angry, or fearful, and the case may be,” is such a great entry point to talking about the relationship between body and self. What are some basic things we can know about this relationship?

AA: William James was one of the first to question the relationship between emotions and feeling, pointing out that we don’t, for instance, first feel angry and then act out that anger, rather that our bodies first manifest the emotion and then we feel those emotions. Modern neuroscience tells us that our sense of self begins with the body. The brain, first and foremost, keeps track of the body, mapping the various states that the body can be in to carry out its remit, which is to maintain the body in a physiologically stable state for survival. Somewhere during the course of evolution, we became conscious of these body states, giving us a sense of our bodily self. Everything else that we are — including the more complex narrative and social selves — is built on this foundation of the bodily self.

PRH: Since there’s so much focus these days on autism, can you talk about that body-self relationship in relation to autism?

AA: People suffering from autism often have difficulties relating socially to others. This is attributed to their struggle with “reading” other people’s minds, an otherwise instinctive ability called theory of mind. While this is a cognitive and behavioral ability, some neuroscientists are saying that an impairment of theory of mind can be a consequence of an impairment of the sense of the bodily self. It’s still early days, and much more work needs to be done to clearly establish this connection, but there are hints that people with autism may be struggling to form a clear percept of their own body and body states. For instance, in one study, three adults with Asperger’s, who all spoke and communicated well, were asked to carry a beeper that would beep at random, at which point they had to introspect and write down the contents of their thoughts. The subjective reports of their inner experiences lacked perceptions of feelings, something that was common in similar reports by neurotypicals.

PRH:Reading through your book, I was fascinated by the specifics of how each condition you explore is an attack on the self. Then to complicate things further, you include philosophical and Buddhist perspectives on the question, “Who am I?” What are some of the ways this mix forces us to redefine and refine our assumptions about how we know who are?

AA: Philosophical and religious perspectives on the self must ultimately explain the phenomenology of being human. And being human includes conditions in which we suffer from Alzheimer’s, schizophrenia, autism, or any other condition that changes our sense of self. So, for example, if a philosopher argues that our sense of being an “I” comes from being agents of actions, meaning that we feel like an “I” because of our sense of agency, then the phenomenology of schizophrenia questions that philosophy. Someone suffering from schizophrenia will clearly tell you that at times they may do something, but they don’t feel as if they did it; their sense of agency is often impaired. Nonetheless, there is still an “I” that is experiencing this lack of agency—that suggests that the “I” cannot be solely the result of being agents of actions.

So, we stand to learn a lot about the nature of the self by listening closely to people who are struggling with their sense of self — and of course, by paying heed to what philosophers and religions like Buddhism offer by the way of their analytical thinking and experiential wisdom about the self.

PRH: You bring in philosopher Daniel Dennett at the end, and you explain his view that the self, in his words, is “a fiction, posited in order to unify and make sense of an otherwise baffling complex collection of actions, utterances, fidgets, complaints, promises, and so forth, that make up a person,” or, as he also says, “the self is the center of narrative gravity.” At Penguin Random House, we pay a lot of attention to the narration of one’s own, or a well-researched other’s, narrative: could you talk more about this notion of the self as an act of telling?

AA: At its most complex, the self is a narrative — a personal, social and cultural narrative. And just like the bodily self needs to maintain an anatomical and physiological integrity, the narrative self, it seems, needs to have a conceptual integrity. The story that one is needs to be coherent. We start becoming a narrative as soon as episodes in our lives become memories, whether they are consciously accessible, or embodied: The more emotionally salient these episodes, the greater their impact on our narrative. And because of the narrative self’s need for coherence, whatever the narrative is at any given stage of one’s life, it “constrains what the self is, has been, and can be,” according to psychologist Martin Conway of City University, London. As I write in my book, the narrative self is influenced by emotionally significant events in one’s life, and this self — or the memories associated with these events — then influences what you do next, and so dictates how your narrative grows.