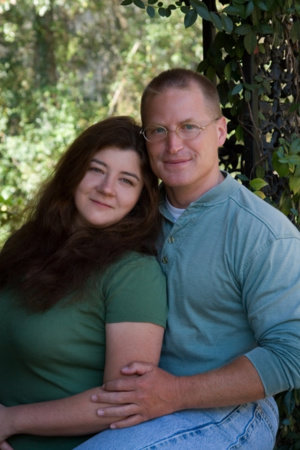 Ilona Andrews is the pseudonym for a husband-and-wife writing team, Gordon and Ilona. They currently reside in Texas with their two children and numerous dogs and cats. The couple are the #1 New York Times and USA Today bestselling authors of the Kate Daniels and Kate Daniels World novels as well as The Edge and Hidden Legacy series. They also write the Innkeeper Chronicles series, which they post as a free weekly serial. For a complete list of their books, fun extras, and Innkeeper installments, please visit their website at www.ilona-andrews.com.

A Novel of the Edge

The vampires in Magic Strikes are nothing like the current crop of vampires in fantasy and paranormal romance—instead of sexy guys who want to suck your blood, they are ravenous beasts who can be controlled by the necromancers, the Masters of the Dead. How did you come up with such a different take on vampires?

I was intrigued by the idea of a necromancer raising armies of undead and sending them off. Usually the necromancers in popular culture tend to be portrayed with an army of skeletons or zombies. My husband co-writes with me, and one evening we were talking about it and the question came up, “Why can’t they control vampires, too?” Things progressed from there and the mindless monstrosity vampires made it into the manuscript.

Were there books that you read as a child that led you to write the kinds of stories you write now? Who are some of the authors you read today?

I grew up in Soviet Russia, and SF/F was mostly not allowed, unless it portrayed “the glorious vision of the Communist future”. I read everything that was allowed, and when the Iron Curtain fell, western SF/F flooded Russia. (Some of it was pirated, but I didn’t know at the time.) I remember reading Tolkien, Clifford Simak, Robert Sheckley, Asimov, Harry Harrison, Stanislaw Lem, and Robert E. Howard. I loved Conan.

Today I try to read widely. A lot of it is nonfiction, but I really enjoy thrillers, especially those with a scientific bent. I very much enjoy the works of Robert Parker, Thomas Harris, and Mario Puzo. Dean Koontz is another favorite. I’m a bit obsessed with David Gemmell and Terry Pratchett. In addition to those authors, I read an embarrassing amount of romances, in particular Joanna Lindsey. Unfortunately, I don’t read as much in the Urban Fantasy/Paranormal area as I used to, but there are several authors I enjoy: Mark Del Franco, Meljean Brook, Nalini Singh, and Jeaniene Frost.

The Atlanta Kate Daniels inhabits is an alternate version of our own world, one where magic comes and goes like the tide. Why didn’t you want magic to always be present in the world of your books? What kind of new storytelling opportunities does this allow you?

I think it’s more interesting to have the chaotic waves. The constant jig of magic and technology keeps the characters on their toes. One moment spells work, and the next they don’t and my guys have to think on their feet. It lets me put them into difficult situations. I think it also adds to the atmosphere of the world—it’s drowning under the relentless assault of magic, and the last chunks of technological might are slowly melting like icebergs in warm water.

You’ve written a novella (forthcoming, in Must Love Hellhounds), as well as your full-length novels. Is the process different? How?

The novella is written from the point of view of Andrea, who is Kate’s best friend. She had a completely different voice, so that was a challenge. But most of all, it’s really difficult to pack a story into a shorter length. I always somehow end up thinking too big for the required length.

A unique feature of your Kate Daniels novels is the appearance of lesser known or non-Western mythologies and magic (speaking as someone who was obsessed with myths and fairy tales from around the world as a child, I love how you do this). In Magic Strikes, Kate takes on the Rakshasas of Hindu legend. Why Rakshasas? How do you decide which mythologies to explore? Are there other myths you’d like to use in future books?

There is so much out there, so many different unique myths. I feel kind of like a kid in an ice cream shop: a wealth of flavors. It would be a shame not to try them all.

Why rakshasas in particular… I was fascinated (and still am) with India. I blame the Jungle Book. My first encounter with rakshasas came when Shere-Khan, the tiger, pushes into the wolf den and the mother wolf tells him that her name is Raksha and he’s welcome to try out her teeth. I had read the story as a child and looked up raksha. Some sources said it meant protection and some said it meant demon. That trail led me to rakshasas and once I read the Ramayana, I knew I had to do something with that mythology.

That’s mostly how Gordon and I pick the myths—something fascinates one of us. For the fourth book, we’re hoping to include elements of Jewish mysticism and some Babylonian folklore.

What advice do you have for people trying to break into writing?

Curran, the Lord of the Beasts, is the leader of Atlanta’s shapechangers (and Kate’s on-again, off-again love interest). He’s also a were-lion. How does his lion side affect his behavior? Did you research lions in order to develop his character?

Curran’s lion side is actually a prehistoric American lion, panthera leo atrox, and some of his behavior is quite lion-like. He’s territorial. He tends to place a lot of value on teamwork among shapeshifters, shaping them into a pride of sorts. He also tends to be a bit autocratic in his approach, but I’m not sure how much of that can be blamed on

Which of your characters would you most like to be friends with?

Aunt B, the alpha of the boudas (werehyenas.) We would have tea and gossip.

OK, here’s where we go all fangirl on you—are Kate and Curran ever going to get together? WHEN?

That’s for me to know and you to find out. But I’d read Book 4 if I were you.

Can you give us any hints about what’s next for Kate?

The next book after Magic Strikes will be rough for Kate. She will have to make choices she won’t like. The confrontation with her father is growing closer and closer, and the threat she faces in the fourth book is directly connected to her family and blood.