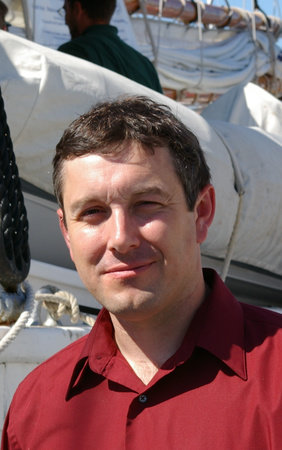 Colin Woodard is a New York Times bestseller writer-historian, and journalist who has reported from more than fifty foreign countries and six continents. A longtime foreign correspondent for The Christian Science Monitor and The San Francisco Chronicle, he is a reporter at the Portland Press Herald, where he received a 2012 George Polk Award and was a finalist a 2016 Pulitzer Prize. His work has appeared in The New York Times, The Washington Post, The Economist, Smithsonian and Politico. He is the author of American Nations, American Character, The Lobster Coast, The Republic of Pirates, and Ocean’s End and lives in Maine.

In the 240 years since the United States declared its independence, the names we have used to identify our politics — Federalists, Whigs, Know-Nothings, Progressives — have changed a lot. In the last hundred years, the Republicans and Democrats have essentially traded positions on many big issues.

Journalist and historian Colin Woodard sees the major conflict across our political landscape not in terms of party labels but the way people answer the question: “When individual liberty and the common good come into conflict, with which principle will you side?” Woodard writes in American Character, an intellectual history of conflict between those two principles, that the country has fared best when we have balanced those interests.

“Sacrifice one,” he writes, “and you are on the road to oligarchy or anarchy; lose the other, and the shadow of collectivist dictatorship looms. You simply can’t have one without the other.”

Woodard sat down with Penguin Random House to talk about the book, the current presidential election, the thorny issue of gun control, and his thoughts on how the best American histories and biographies are making sense of the past in the information age.

PENGUIN RANDOM HOUSE: Did you approach the book with the common-good-vs.-libertarian argument in mind, or did that come out of some puzzle you were trying to solve?

COLIN WOODARD: That has been my approach throughout researching the book, but I wasn’t positive where the ultimate solution would lie. If you look at the experience we’ve had over the past 400 years and the regional cultures with profoundly different views on what the correct balance should be, you realize that we don’t have an American consensus on what kind of society we want.

PRH: Political philosophers like Hobbes and Locke made a lot of assumptions about human nature. Does a lot of that fall into what we would consider behavioral science today?

CW: The work that Edward O. Wilson is doing on human evolution asks the question about the relationship between individual selection pressures and group selection pressures. If you look at the origins of civilization and government, we began in tribes and bands before we had government. From what we know now, a lot of things those political philosophers thought about human behavior and how governments got started need to be corrected.

PRH: There are a lot of areas where proponents of the common good and proponents of individual liberty aren’t really in conflict. We can have a social safety net and free speech, for example. Where do you see those two philosophies really coming into conflict?

CW: There’s conflict on most of the issues we’re confronting. The classic one is the contemporary debate over gun control. What is the correct balance between the individual’s freedom and liberty to carry firearms and society’s common-good interest in public safety? The question over universal healthcare is another. The insurance model is a classic common-good idea where you have a pool of people who share risk vs. people who say a male shouldn’t have to contribute to someone else’s maternity coverage.

PRH: But there are 80-20 issues on both the common-good side and the individual-liberty side. There’s something like 80-20 support for reasonable gun restrictions and 80-20 support for some form of universal health coverage. Do you think it’s more an issue that our political structure often doesn’t reflect that consensus?

CW: On gun control, that’s an issue where the NRA is a powerful lobbying group that’s trumping public support. There are issues like that where money in politics is a major stumbling block. The NRA is highly organized, has a lot of money, and they can effectively mobilize people to run a primary campaign against someone. The 80 isn’t as mobilized as the NRA’s 20.

CW: Absolutely. That’s a product of the libertarian block of the Republican Party controlling some of those appointments. You can’t get around that kind of deadlock when neither major party has a platform that regularly commands a super-majority of the country. You need the Electoral College, a filibuster-proof Senate, and the majority of the House to govern, and neither party has a message that commands a majority.

PRH: There’s some recent demographic data that the white male vote for president dropped from 45% to 35% in the last thirty years. There’s not much of an upside for Republicans to try and max out the white vote, is there?

CW: If you overlay the Electoral College map, white males play an outsized role in certain swing states. The clear play for the Republicans, though, has been to go after the Latino vote — a family-oriented, religious, entrepreneurial culture. George W. Bush was making those arguments, but that has gone by the wayside. They’ve given that vote to the Democrats by default. It’s political suicide. If the Republicans lose Texas on the Electoral College map, they cease to be a national party.

PRH: It seems pretty clear that if Donald Trump is the nominee, the strategy will be to max out the white vote — trying to get a higher percentage of the white vote than what Mitt Romney got four years ago.

CW: I think that’s true. I don’t see how the map works for him in the general election with that strategy.

PRH: A Trump strategist would say that if you look at battleground states that have voted in the primary like Ohio and North Carolina, that the turnout enthusiasm is on the Republican side.

CW: In the general election, if Trump is the nominee, he could motivate people to vote for him but minorities and other people fearful of him as president to vote against him. Even in the last month, his rhetoric has gotten more authoritarian and his rallies have gotten violent.

PRH: Have you seen any polling data or anecdotal data that would contradict the idea that Donald Trump’s supporters are pretty much the Tea Party people who emerged after President Obama was elected?

CW: I haven’t seen a lot of data on that yet, but my general sense is that the Tea Party people tended to be older and relatively well-off and the Trump supporters are not as well educated, less affluent, and more vulnerable to the economy than the Tea Party people. I think the Trump people are more like the Reagan Democrats who have been affected by the loss of manufacturing jobs.

PRH: That or he’s essentially a Southern candidate — Newt Gingrich with broader support.

CW: I would have guessed months ago that his success would be mostly limited to the Deep South, the Appalachian areas and parts of the West, but he did extremely well in Massachusetts. He’s not just a southern candidate. Maybe some of that is attributable to racial tension.

CW: No, not at all. They were libertarian in their desire to maximize their liberty and essentially take it away from others.

PRH: Most of the Great Society legislation in the 1960s — the Civil Rights Act, the Voting Rights Act, Medicare, Medicaid — happened in a two-year period. Do you think there was a backlash against those things in particular or that the backlash was more about the riots and about the escalation in Vietnam?

CW: Those things were happening simultaneously and it’s hard to rerun them against one variable, but I think there was some backlash against those programs. The distinction between the Great Society and the New Deal programs that had come a generation before was the ambition of government to get involved to a much greater degree than the government ever had before. It was idealistic and ambitious, but it was a reach of the government further into the greater-good realm than previously, and there was some backlash against that. The difference between the promises it made and the results it delivered was so wide that it discredited the public’s faith in the government to do those things.

PRH: I assume you read and reread a lot of history researching the book. You covered such a wide period and cited such a diverse group of historians and biographers, did you get much of a common sense of what people like Ira Katznelson, Eric Foner, H.W. Brands, Rick Perlstein are doing right now?

CW: I think there’s an effort to go back to some key issues and create a unified narrative that incorporates a lot of things that have been lost. A lot of history has been written through so many different lenses that you don’t get a big-picture view of what happened.

PRH: A lot of the more celebrated historians are not being noted for uncovering things that weren’t previously known as much as they’re taking a known record and reshuffling the cards.

CW: It’s synthesis. We live in an information society where getting to the information isn’t the problem — it’s having the time and the ability to make sense of what it all means. They’re assembling facts in a meaningful way. Even in journalism, there’s such a spigot of day-to-day news that people forget how what happened last month affects a particular issue. Sometimes you write a story that rounds up things that have happened on Issue X in the last four months, and people love it. Just the fact of synthesizing facts in one place can reveal what’s really happening.