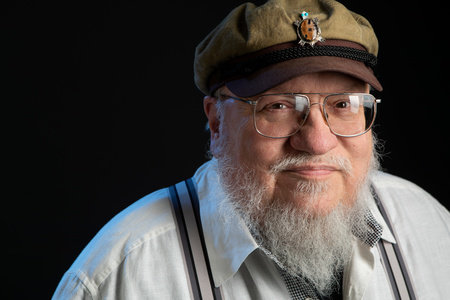 George R. R. Martin is the #1 New York Times bestselling author of many novels, including those of the acclaimed series A Song of Ice and Fire—A Game of Thrones, A Clash of Kings, A Storm of Swords, A Feast for Crows, and A Dance with Dragons—as well as Tuf Voyaging, Fevre Dream, The Armageddon Rag, Dying of the Light, Windhaven (with Lisa Tuttle), and Dreamsongs Volumes I and II. He is also the creator of The Lands of Ice and Fire, a collection of maps featuring original artwork from illustrator and cartographer Jonathan Roberts, The World of Ice & Fire (with Elio M. García, Jr., and Linda Antonsson), and Fire & Blood, the first volume of the definitive two-part history of the Targaryens in Westeros, with illustrations by Doug Wheatley. As a writer-producer, he has worked on The Twilight Zone, Beauty and the Beast, and various feature films and pilots that were never made. He lives with the lovely Parris in Santa Fe, New Mexico.

Sign me up for news about George R. R. Martin and more from Penguin Random House

A Storm of Swords: The Illustrated Edition

A Clash of Kings: The Illustrated Edition

A Clash of Kings: The Graphic Novel: Volume Two

A Feast of Ice and Fire: The Official Game of Thrones Companion Cookbook

A Game of Thrones: The Graphic Novel

A Song of Ice and Fire Illustrated Edition