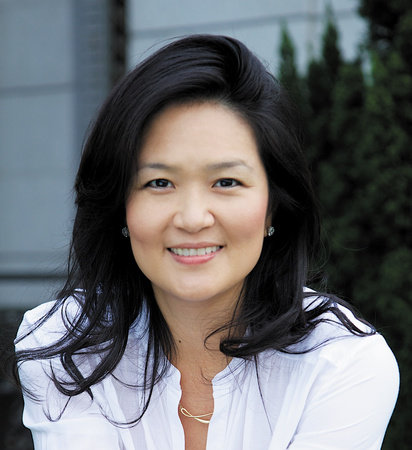 Janice Y. K. Lee was born and raised in Hong Kong. A former editor at Elle, she lives in New York with her husband and four children.

Sign me up for news about Janice Y. K. Lee and more from Penguin Random House

Janice Y. K. Lee was born and raised in Hong Kong, the child of Korean expatriates. In her teens, she moved to America, but moved back to Hong Kong as a mother. So she writes from experience in her novel The Expatriates, which recounts a tumultuous time in the lives of three American expatriate women living in Hong Kong.

The women Lee writes about didn’t move to Hong Kong of their own volition; they are wives (well, some of them are), they are lost, they have no other options. They exist outside the realm of traditional Hong Kong society, continuing to celebrate Thanksgiving and watch the Super Bowl, and thus an American expatriate society is born. But just because they exist in a bubble doesn’t mean that devastation cannot reach them.

As her book turned to paperback, Lee joined us to discuss her own experience as an expat, motherhood, why we so frequently misunderstand each other, and more.

PENGUIN RANDOM HOUSE: What inspired you to write a novel about American expatriate women living in Hong Kong?

JANICE Y. K. LEE: This was indeed a case of writing directly from your life experience. I had grown up in Hong Kong the child of Korean expatriates but left for school in the U.S. when I was fifteen. After time in New Hampshire, Massachusetts, and New York, I found myself moving back to Hong Kong in 2005, married, with two children. The world I entered and encountered there, the world of the American expatriate, inspired the world in this second book.

PRH: You were born in Hong Kong, and you’ve lived in America. To what extent is this novel based on your own experiences? What are your own feelings about the expat experience?

JL: This novel is based on my observations of the world I lived in for the past ten years but I always felt like I lived in it as an observer and not 100 percent as a citizen of it. I was born in Hong Kong, but the first part of my life in Hong Kong was not very American, save for the school I attended. If I had gone to an English or Chinese school, I imagine my life would have been wildly different. The school I went to really directed the course of my life. I went and lived in America for the next eighteen years.

So when I returned to Hong Kong for the second time, it was as an American expat, except I was from Hong Kong as well. So I had various ways of seeing the world, as it were. I was an observer at the same time I was a participant. I have positive feelings about the expat experience. I think getting out of your comfort zone is always a good thing. I think that expats have a very tight, intense bond that I liken to your college years. There’s a feeling that it’s temporary, that you’re having this adventure together, and people are much more open than they would be back in their home environment.

PRH: The expatriate characters in your book cling to their national identities, continuing to consume American products, mingle with American people, and abide by American customs. Why do you think this is such a common response to living abroad? Do you think it’s a response to push back against?

JL: I think it is a common and completely understandable impulse to cling to the familiar, especially when thrust into the unknown. Many people have never traveled outside of the United States and are suddenly told they are moving to China! That is a lot to intake, especially if you have children. I am talking from the perspective of a very particular kind of expat, the kind who are not there by choice, or because they are adventurous spirits. For them, the desire to find a community among strangers in a strange land is completely normal. Even for more itinerant types, the promise of a really good pizza, or bowl of noodles, or sushi, something to remind you of home, depending where you’re from, can be an intoxicating comfort. While getting out of your comfort zone is generally a good thing, finding refuges is also a good thing.

PRH: In a similar vein, to what extent do you think our national identities dictate who we are going to become?

JL: I think that who you become is most dictated by one’s own personality and predilection (circumstances and opportunity being huge variables, obviously). Where you are born, what class you are born into, all of these things dictate these things more. Hilary, Mercy, and Margaret are Americans but they’re all quite different.

PRH: The Expatriates is rich with flashbacks and memory sequences from which you seamlessly segue back into the present of your storyline. It reads effortlessly, but did it require some planning? What kind of preparation did you do before writing the book?

JL: I’m glad it seems seamless! I so wish I could plan. Or have a plot in advance. I write in a meandering, searching sort of way without ever quite knowing where the story will end up but I do think my subconscious is doing most of the work, filtering, editing, seeing where the story is going. I do write and rewrite a lot. I print out what I have, read it and edit it on the page. I see what works, what doesn’t, cut, write, add, edit. I think that a lifetime of reading books is the preparation I most value.

PRH: The female characters in your book may each make many mistakes, and hurt themselves and each other, but the one aspect of each of their lives in which they are more often than not able to stay above water is in their role of mother. What do you think it is about motherhood that can bring out the strength in us?

JL: I think it is biologically ingrained, absolutely. It’s also completely drilled into us from every angle. Motherhood is the unassailable fortress: we have to live up to it, we have to be worthy of it, we have to bow down to its complete power. It is imposing, imposed upon us and yet most wouldn’t have it any other way. I think motherhood is an entire essay, if not an entire lifetime.

PRH: Your book moves between the points of view of three expat women: Hilary: wealthy, childless, and looking to adopt; Margaret: a mother of three; and Mercy: young, and very lost. Did you have a character who you most enjoyed writing?

JL: I felt like they were all women I knew but I didn’t particularly identify with. Certain parts of all of them were very relatable: Mercy’s Korean identity, Margaret’s motherhood experience. They led me to themselves, and I would never say “enjoy” but I spent a lot of time with them.