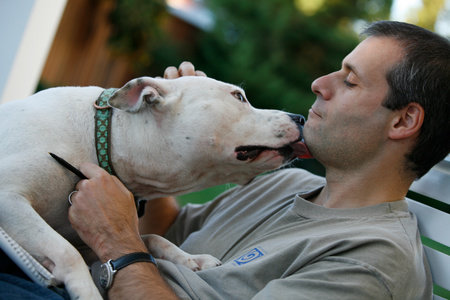 Jim Gorant has worked as a magazine editor and writer for twenty years and is currently a senior editor at Sports Illustrated. He is the author of Fanatic: Ten Things All Sports Fans Should Do before They Die, and his work has appeared in magazines such as Men’s Journal, GQ, and Outside. He lives in New Jersey.

Q. Why do you think pit bulls have such a bad reputation? Can public opinion of pit bulls be reversed?

There’s a lot of reasons for that, but essentially, I think, pit bulls are caught in a self-perpetuating cycle of incrimination and bad ownership.

When there’s a problem with a dog, any dog, it’s almost always the owner’s fault. Either the dog has been poorly socialized or mistreated or put into a situation where its instincts are in opposition to what people consider good behavior.

On top of that, there’s the pit bull’s reputation as a fierce and highly capable warrior, which means that the breed often attracts the kind of owner who’s looking for a dog to personify and bolster his or her own tough-guy credentials. It’s exactly the kind of owner who will fail to raise the dog responsibly and might even encourage aggressiveness and put the dog in situations where it’s bound to fail.

Once a dog fails, a flood of media coverage follows, which only further damages the pit bull’s reputation in the public’s eye and draws even more bad owners to the breed. This entire phenomenon was detailed in an excellent book called The Pit Bull Placebo, which tracked its evolution over the last 150 years.

Can it be reversed? I’m not an advocate or an activist but I hope so, because I think these are essentially good dogs that have received a bad deal. The Bad Newz case was a step. The Lost Dogs could be another step. That’s all that can be done right now: keep taking steps maybe one day the breed will arrive at a better place.

Q. How did the practice of dog fighting being and what motivates people to become involved with it?

The pit bull and its close relatives—the Staffordshire bull terrier and the American Staffordshire terrier—trace back to the 17th and 18th century English practice of bull- and bearbaiting, in which canines took on giant predators for public amusement. When that activity was banned in the early 1800s, the dogs were then turned on each other and the practice evolved from there.

That’s simply one isolated strain, though. Unfortunately, dog fighting occurs all over the world and each culture seems to have its own favorite breed for the task. Although I’m no sociologist, it seems the impulse is connected to some violent and tribal drive that lies deep within our own nature. Most people are able to exercise those demons by yelling at flight attendants or clueless customer service reps or, ironically, watching the NFL, but for some people that instinct runs to a deeper bloodlust. I imagine it’s the same instinct that has led to the stunning popularity of ultimate fighting sports and mixed martial arts over the last decade.

Q. What does the future hold for the Vick dogs and pit bulls in general?

In a way, there’s no such thing as the Vick dogs anymore. They’re now forty-something individual dogs, and each is out there fighting its own battle against its own particular history. That’s their future. For some it’ll be a life that looks and feels a lot like any other family pet. For others there will be times of joy mixed with times when they are cowed by their fears and memories.

For pit bulls in general I fear there’s a lot more of the same. I was talking to a friend recently who has a Doberman pinscher and he told me that when he brings his dog to certain parts of town, he’s almost always approached by someone who asks if he wants to fight her. And that’s in suburban New Jersey. Whatever progress has been made, it pales in comparison to the entrenched and widespread practice of dog fighting.

Q. Has the treatment of the former Vick dogs changed the way that fighting dogs are dealt with?

Before this case the common practice was to treat all the dogs taken from a fight bust as one entity. The conventional wisdom was “save them all or destroy them all.” When it came time to decide the group’s fate, many parties would argue that for the most part these dogs were violent and aggressive and beyond rehab so why use time and resources on them when there were plenty of other perfectly good dogs already languishing in shelters? Most of the time, the entire collection of dogs was put down.

The Bad Newz case helped seed the idea that such dogs should not be looked at as a group, but that each should be individually evaluated and judged. The approach was successful, and in December of 2008, the Humane Society of the U.S. changed its official policy so that instead of recommending euthanasia for fight-bust dogs, it supported a program of individual evaluation.

Q. Was Michael Vick treated unfairly or prosecuted just because he was famous?

He was definitely not treated unfairly. He broke the law. He got caught. He pled guilty and was sentenced. Some have received lesser sentences than he did, but others have received harsher sentences for the same violations. There’s some evidence that he could have been charged with additional crimes, but he was not. He served two years in Federal prison and was forced to declare bankruptcy.

He was not prosecuted because he was famous, but his celebrity aroused a great deal of public interest, and that ensured that the case would remain in the spotlight and that an outcome that didn’t seem to serve justice would have caused considerable backlash.

Q. What do you say to people who shrug off dog fighting by saying that these are “just dogs,” we kill cows and chickens and hunt deer, so what is different about dogs?

Men first domesticated dogs more than 10,000 years ago, when our ancestors were hunting for their meals and sleeping next to open fires at night. Dogs were instant helpers in our struggle for survival. They guarded us in the dark and helped us find food by day. We offered them something too, scraps of food, some measure of protection, the heat of the flames.

Certainly, as man rose in the world, dogs came with us, perhaps even aiding the advance. They continued to guard us and help with hunting, but they did more. They marched with armies into war, they worked by our sides, hauling, pulling, herding, retrieving. We manipulated their genetic makeup to suit our purposes, cross breeding types to create animals that could kill the rats infecting our cities or search for those lost in the snow or the woods. From the start it was a compact: You do this for us and we’ll do that for you. And dogs have that innate ability to sense what we’re feeling and commiserate. There’s a reason they’re called man’s best friend.

As for why our bond with them matters, there are reasons for that, too. If you hang around animal activists for a while you’ll inevitably hear repeated a famous Gandhi quote: “The greatness of a nation and its moral progress can be judged by the way its animals are treated.” The idea being that in order to lift the whole of society, you must first prop up the lowest among its many parts. If you show good will and kindness toward those who cannot stand up for themselves, you set a tone of compassion and good will that permeates all.