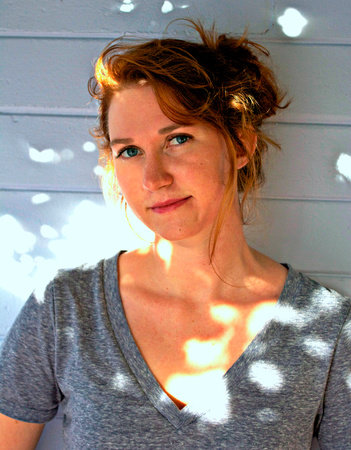 Lily Brooks-Dalton was born and raised in southern Vermont. She is also the author of the memoir Motorcycles I’ve Loved, which was a finalist for the Oregon Book Award.

A coming of age memoir is not uncommon these days — but a book that’s all about momentum, motion, and the allure of the road as told by a young female motorcyclist is. Lily Brooks-Dalton is a writer with an innate curiosity for the world we live in, whether it’s through words or traveling or science. In Motorcycles I’ve Loved, she returns to New England after traveling abroad for several years, and discovers that she still has so much to learn. I interviewed her over email about the reasons she wrote this memoir, dealing with sexism as a female motorcyclist, and the transformative experiences she went through.

PENGUIN RANDOM HOUSE: Your memoir focuses on both the physical and metaphorical trips motorcycles have taken you on. How did you come up with the idea for this book?

Lily Brooks-Dalton: The book started as a series of essays. I wanted to write about physics in a way that was engaging and emotional, as well as scientific. At the time I was discovering a newfound interest in science, and also why motorcycles had come to mean so much to me, so pairing each concept I wanted to discuss (velocity, friction, entropy, etc.) with a motorcycling experience made a certain poetic sense to me. Eventually the essay collection became the first draft of the memoir, and from there I ended up having to go a lot deeper into the metaphorical and emotional aspects of my experiences.

PRH:What did you find more challenging: writing about your complicated relationships with family members (your brother) and an ex-boyfriend, or giving yourself permission to write about such personal things?

LBD: I think giving myself permission was probably the hardest. These relationships are a part of me, so once I opened those doors the words came pretty easily. What was difficult, and continues to be difficult, is the vulnerability of letting those things be public property. Some of the relationships that I wrote about felt deeply private, and so the idea of letting those things into a public sphere where they can be judged and commented upon is terrifying.

PRH:I feel like there’s a bias towards young memoirists. Some people think that a writer needs years of reflection in order to process their own life. But as you write in your book: “What I know now might need revising in one year, or ten, or twenty, but that doesn’t make it any less important.” What are the advantages to writing a coming-of-age memoir while you’re still in your twenties?

LBD: I love this question — I’ve given it a lot of thought throughout the process of writing this book and then publishing it. I agree that years of reflection can be incredibly beneficial, and there are times when I wish that I had waited to tell this story — this story that is still happening! But, I always come back to the fact that I didn’t choose to write this book. It chose me. And I think that as a writer, if you are lucky enough to have a project raise it’s hand and shout pick me, write about me, then it’s almost sacrilegious to look away. So the advantage, I suppose, is urgency. This story demanded to be written right then, and I’m not sure that would have been the case fifteen years later. The experiences I wrote about were fresh and immediate — and I think that can be both an asset and a liability. I hope in this case the result is weighted toward the former.

PRH:At one point you talk about how certain memories from years ago can be more vivid than yesterday: “It’s so strange the way a moment can crystallize that way, like a fly in amber — another mystery.” Now that you’ve written a memoir, do you find yourself paying extra attention to the smallest details of your life in order to remember them?

LBD: Not really. I’m not sure I’ll ever write another memoir — fiction has always been my primary interest — and so I think that if I do try my hand at it again, it will be because an idea demands it, not because I’ve been stockpiling memories with a new book in mind. I think the magic in realizing in hindsight that a small moment has become solid comes from experiencing so many small moments and never knowing which ones will stick. It’s like a museum your subconscious is curating, picking out these brief experiences that didn’t even register as being particularly important in the moment, but that appreciate in value over time and eventually become priceless.

PRH:I’m curious about the sexism you encountered as a female motorcyclist. I’m thinking in particular of one chapter in the book in which you go to get your motorcycle inspected and the owner of the dealership talked down to you and assumed you didn’t know what brake pads were for. Instead of feeling defeated, you felt more determined than ever. Do you think your experiences traveling overseas gave you the confidence you needed?

LBD: I think it helped, certainly. Getting into the habit of feeling capable and resourceful can be difficult when you start out feeling helpless. It can take time and practice. I think by the time I was riding, I was beginning to see the relationship between defeat and determination. Sometimes feeling defeated is what it takes to tap into determination — dumping a motorcycle and then getting back on is such a humbling and difficult moment. But it’s vital. And so I think that interaction about the brake pads was a mixture of both: wow, this guy thinks so little of me, I feel so incredibly small right now, but also, wow, I am so much more than he knows and I will prove it.

PRH:Before you left the country, you felt “propelled forward not by a presence but by an absence.” And you spent a significant amount of time at boarding school, before leaving, dealing with chronic depression. How did time spent on your motorcycle change your outlook on life?

LBD: I learned how to move through the hard stuff with dignity and grace. It doesn’t mean it’s not difficult, but there’s always a choice when something hard happens — I can be humbled, learn something new, feel something real, and move forward, or I can wallow around in self pity and be a jerk to the people around me. That sounds pretty obvious, but riding motorcycles was the backdrop for really understanding that to be true.

PRH:How did you decide on the structure of this book?

LBD: The structure was where I began. I wrote Acceleration first, as a standalone essay, and then immediately I realized I had more motorcycle stories to tell — and so many more physics concepts I wanted to learn about and relate to on a personal level. The structure drove the whole project from the beginning.

PRH:You took a motorcycle trip with your father. What was easier: traveling with your boyfriend or your dad?

LBD: That’s hard. I guess the boyfriend, actually — there’s this slippery slope with parents of devolving into a bratty child when things get hard. I hate it, and it definitely happened once or twice on that trip with my father. The dynamic of two adults who are peers was a little easier to navigate.

PRH:If you had to pick one moment, what is the most memorable experience you had as a motorcyclist?

LBD: I’ll pick a moment with the caveat that it might change tomorrow! Right now what comes to mind is riding my very first motorcycle for the very first time. I felt like I could do anything. I had put all this work into learning to ride, buying the bike, registering it, etc., and finally getting it out on the road was so incredibly satisfying.

PRH:What’s your advice for aspiring memoirists? How does a writer know if their story is worth telling?

LBD: I’m not sure a writer ever knows if their story is worth telling — I certainly didn’t. I still struggle with feeling like my story deserves a place on someone’s bookshelf. But I think that’s a trap writers have to try not to fall into. If you have a story you want to write, that you need to write, then write it. Let someone else worry about whether or not it’s worth telling. If it’s worth it to you, then that’s all you need to know.