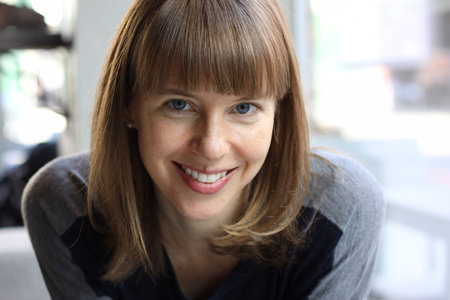 Louisa Thomas is the author of Louisa: The Extraordinary Life of Mrs. Adams and Conscience: Two Soldiers, Two Pacifists, One Family — A Test of Will and Faith in World War I, and the coauthor of Mind and Matter: A Life in Math and Football. A staff writer at The New Yorker and a former writer and editor for Grantland, her writing has appeared in The New Yorker, The Atlantic, The New York Times, Vogue, and other places.

Louisa Thomas is the author of Louisa: The Extraordinary Life of Mrs. Adams and Conscience: Two Soldiers, Two Pacifists, One Family – a Test of Will and Faith in World War I. She is a former writer and editor for Grantland and a former fellow at the New America Foundation. Her writing has appeared in The New York Times, Vogue, The Paris Review, and other places. Louisa Thomas chatted with Penguin Random House about her interest in Louisa Adams’s unknown story, the research that went into her book, and what’s up next for her.

PENGUIN RANDOM HOUSE: When did you first discover Louisa Adams, and what drew you to her story?

LOUISA THOMAS: I came across some of her letters while working on a project on Andrew Jackson, and I was startled by the vividness of her voice. I thought to myself, Who is this Louisa, and why don’t I know anything about her? The more I learned, the more I wanted to know.

PRH: Why do you think Louisa Adams’s story has been largely overlooked so far?

LT: For starters, biographers have tended to focus on people who wield power, and those people tend to be men. (There are exceptions of course; Louisa’s mother-in-law, Abigail Adams, is one of them.) But I also think that many historians who have come across Louisa have taken her a little for granted. This is partly her own doing. She was forever disclaiming her own importance. She even called one of her memoirs The Adventures of a Nobody.

PRH: Throughout the book, you pull extensively from Louisa’s memoirs, diaries, and letters. Apart from these firsthand accounts of her life, which must have been invaluable, what other kinds of sources did you find helpful when crafting an image of Louisa’s life for yourself and your readers?

LT: Primary sources comprised the core of my research. But there has been a lot of scholarship about the Adams family and the early republic, and it taught me a tremendous amount. It spanned everything from the rise of grassroots democratic movements to gender in the early republic. Some of the most helpful were the most unexpected — for instance, a book about the hemp trade between Russia and the United States, and a book that looked at every known portrait of a member of the Adams family.

PRH: How did you go about the process of deciding what to include and exclude from your book? It seems that Louisa wrote a great deal, especially toward the end of her life. Did you ever have to make any difficult decisions?

LT: Painful ones! Louisa joked that she was sometimes seized by a “Cacoethes Scribendi” — a mania for writing. There was a great deal I had to leave out. (If I could have, I would have included her novella The Metropolitan Kaleidoscope in full.) And sometimes I got wildly sidetracked. I spent days trying to learn about the secret engagement of one of Joshua’s business partners, for instance, and reading memoirs from the Prussian court. In the end, though, I mastered the material. I wrote draft after draft. And in a way, nothing was ever truly cut. It’s all there, in the background, like a formative but forgotten memory.

PRH: Prior to writing Louisa, you were a staff writer at Grantland. How did writing a historical biography compare to writing for Grantland? Did you find that there was any crossover in the writing processes?

LT: In fact, writing Louisa and writing for Grantland overlapped almost exactly. I’m sure they informed each other. My writing improved immensely from the demands of writing for Grantland. I learned how to put more pressure on language. And I also learned more about the way I write. The process of writing a 500-page biography of a historical figure is very different from writing a blog post on deadline about a tennis match, but my approach is basically the same. I revise a lot. I always start away from my computer, without a pen in hand, and write in my head.

PRH: There is a keen attention to detail in Louisa that ranges from the material details of Louisa’s everyday life to her innermost thoughts and feelings about her husband, her marriage, and the political and social landscape of the burgeoning United States. Did you find all of this detail in Louisa’s writing? Did you ever feel that you knew her well enough to begin to make inferences about what she may have felt at times, if she hadn’t written about it herself?

LT: Everything comes from the sources. In the few moments in which I speculate, I say so. It helped that Louisa wrote so much about her feelings – though of course there are moments when there are good reasons to believe she was not the best (or most forthcoming) interpreter of her own experience. You have to read everything in context. But I was always aware that there was a gap between myself and the past that I could not cross.

PRH: You mention early on in the book that Louisa was “not modern but had a modern voice,” a statement that is proven true via her vivid writing, which you include in the book. What do you think her modern voice can teach us about what it means to be a woman today, and what it meant over the course of history?

LT: The past is not like the present, but we can still learn much from it. Louisa faced many of the same questions and challenges that many women – many people – struggle with today. How should a person be? How do you balance conflicting responsibilities to the people you love? What is the nature of ambition, and what are its costs? How do you deal with grief? Her answers weren’t the same as ours – but there is something resonant about the way she asked the questions.

PRH: You paint Louisa so vibrantly, and with such fairness. Over the course of your research, as you immersed yourself in her life’s writing, did you grow attached to your subject? Was it ever difficult to remain objective?

LT: I think a biography has to have a complicated relationship with its subject. I never was able to work on the end of the book – her death – without crying. There were days she delighted me to no end. And there were days she drove me crazy. She could be very difficult! I never forgot that she was not the woman I wanted her to be. She was only herself – her complicated, extraordinary self.

PRH: So much of Louisa’s life was predicated upon straddling contradictions: it was both frowned upon and necessary for a woman to be intelligent; she was both English and American; and she had to rise to the occasion of being a member of the mighty Adams family without ever causing too great a stir. Do you think that other women of her time struggled as greatly with such contradictions? To what extent do you think these contradictions are present in women’s lives today?

LT: Louisa was probably more aware of the tensions in her identity than most. How could she not be? There were articles published in newspapers suggesting that she was not fully American. And as the wife of a politician – especially one who refused to pander to people – she had to be forceful and invisible at once. So much has changed since then, but women still have to deal with many contradictory demands. Just look at our footwear! Those shoes were not made for walking.

PRH: Do you have any future projects in the works that you can tell us about?

LT: I’m still nosing around. But I have the feeling that I’m not done with Louisa’s era quite yet.