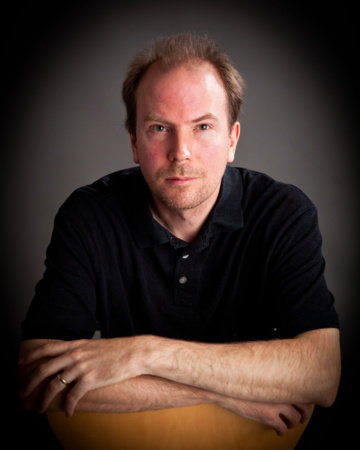 Mark Lawrence is a research scientist working on artificial intelligence. He is a dual national with both British and American citizenship, and has held secret-level clearance with both governments. At one point, he was qualified to say, “This isn’t rocket science—oh wait, it actually is.” He is the author of the Broken Empire trilogy (Prince of Thorns, King of Thorns, and Emperor of Thorns), the Red Queen’s War trilogy (Prince of Fools, The Liar’s Key, and The Wheel of Osheim) and the Book of the Ancestor series (Red Sister).

The Book That Wouldn’t Burn

The Girl and the Moon

The Girl and the Mountain

The Book of the Ice

Book of the Ancestor

Mark Lawrence is back with his Grey Sister!

But first, let’s talk about the first book in the series. With Red Sister, Lawrence has created a fantastically compelling character in Nona, a young girl who is brought into a convent that is quite different from those you have read before. There she meets a possible destiny that has been ordained for her — or has it? — and along the way she makes great friends and horrible enemies.

Political intrigue both inside and out of the convent, a great magic system, fantastic nun teachers, and much more inhabit this wonderfully-realized world. And tomorrow, the sequel to Red Sister publishes!

It is titled Grey Sister and continues Nona’s story in the most unexpected way — with blood and friendship.

Here is an interview with Lawrence! Enjoy!

PENGUIN RANDOM HOUSE: Grey Sister is in fine bookstores tomorrow. It is the second book in the Book of the Ancestor trilogy. Tell readers about the first book, Red Sister, and how you came to create its main character Nona?

Mark Lawrence: I really should invest some time making up fake meta-origin stories for my characters. I met this young girl covered in blood and being sold by her mother and it inspired me to… But no, the answer is more prosaic. I pushed my daughter around the park in her wheelchair while thinking to myself … what sort of character shall I centre my next book on? How about a young girl who undergoes some sort of training? I don’t want her to be like my previous two main characters, Jorg and Jalan. How about I make her nice? But violent! Yes. A loveable killing machine. Done.

PRH: Nona is one of my favorite characters. She reminds me a lot of Kvothe at the beginning of The Name of the Wind. When you sit down to begin work on the first book in a trilogy, how much of your main character do you know for that trilogy’s end? Does the writing lead you there or did you know Nona’s overall arc before writing?

ML: I don’t plan my books or my characters. They grow on the page as the word-count mounts. What I know about them at the beginning could be summed up with a short list of adjectives. The reason I enjoy writing is that I’m discovering the story as I write it. If I knew too much about it beforehand I wouldn’t have the motivation to actually write it. Discovering the characters is also part of the fun.

PRH: You always infuse a lot of philosophy into your novels, your characters able to look at the world around them and realize fundamental truths about humanity as well as that world. How much of that is your own observation being put into the book?

ML: I’m not sure that they really are fundamental truths about humanity. They are the thoughts and epiphanies of the characters and as such are not always things I would agree with. I’m unfortunate enough to be afflicted with doubt and so pithy aphorisms generally don’t work for me, though I can appreciate them in a poetry/prose sense. But you need a more black and white view of the world to be satisfied with one liners, and given that my characters tend to be pretty young that often makes a good fit. At best the shorter observations chip away at the larger issues, providing different glimpses of something deeper.

The lines that readers often like are versions of my own thoughts but generally pared down to something that is more definite and assured, making for satisfying lines that are intended to illuminate the character that serves them up, and perhaps on occasion to say something worthwhile. Everything in writing should ideally serve multiple purposes. Any description or wisdom delivered through a character is intended to say things about that character as much as it is intended to say things about the world around them.

There will be subjects in the book about which different characters will say opposing things – both of those opposing views being confident and somewhat poetic shadows of more nuanced but less page-worthy thoughts of my own.

PRH: You have now written and published a middle book for three different trilogies. Many writers have a hard time making that middle book stand out. What’s the hardest thing you found while writing Grey Sister?

ML: I think it was Hemingway who said, writing is easy, you just sit down at a typewriter and bleed.

I don’t do that. Which may well be why people will still be talking about Hemingway long after my work is forgotten. Be that as it may, I rarely find anything about writing a book hard. Even when a scene is very emotional and may make me emotional too … I don’t call that hard. As a scientist I very often found my work hard, but with writing it just seems to flow, there are no rights and wrongs, no proofs required.

I guess I see each book as … a book … no matter what their number in a series is, and as such I try to make them all as interesting as I can. So … no, writing Grey Sister was easy. I don’t think that admitting it should make people doubt its worth. But I guess if I get backlash about that then I am a writer and not bad at making shit up, so I can just make up some story about bleeding over my keyboard for future reference!

PRH: Holy Sister, the third book of the set, publishes next year. It is finished. How satisfied are you with Nona’s overall story and how it all concludes?

ML: Heh. Has anyone ever answered anything but “very” to this sort of question?

Grey Sister by Mark Lawrence is in fine bookstores tomorrow!