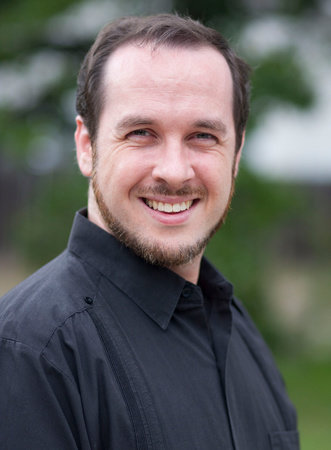 Marshall Ryan Maresca is a fantasy and science-fiction writer, author of the Maradaine Saga: Four parallel series set amid the bustling streets and crime-ridden districts of the exotic city called Maradaine.  This includes The Thorn of Dentonhill, A Murder of Mages,  The Holver Alley Crew and The Way of the Shield.  His work also appeared in Norton Anthology of Hint Fiction and Rick Klaw’s anthology Rayguns Over Texas. He also has had several short plays produced.  He lives in Austin with his family.

The Assassins of Consequence

The Velocity of Revolution

People of the City

Shield of the People

We caught up with author Marshall Ryan Maresca as his second installment to his Maradaine Constabulary series (which also happens to be his second series set in Maradaine, along with The Streets of Maradaine) hit bookstores. Read on to learn why Maresca just can’t seem to stop writing about Maradaine (a third series is in the works!), his most important world-building exercise, and more.

PENGUIN RANDOM HOUSE: An Import of Intrigue is the second installment to your Maradaine Constabulary series. Can you begin by telling us a bit about the series, and the world in which it is set?

Marshall Ryan Maresca: The Maradaine Constabulary series is the second series set in the city of Maradaine—a port city of magic and mystery, crime and gangs, power and politics. It follows two inspectors: Minox Welling and Satrine Rainey, who are both outsiders and outcasts for their own reasons.  They’ve got a strong partnership based on mutual respect and trust.

PRH: Would you say An Import of Intrigue can be read as a standalone, or should readers pick up A Murder of Mages first?

MRM: Of course you should read the first book first. And buy one for your mom as well. And it makes a lovely Christmas present for everyone you know.


All kidding aside, the story of An Import of Intrigue is a standalone, and I do my best to re-introduce the characters and the world so it could be the first Maradaine book one reads… but it would make more sense if you read A Murder of Mages first.

PRH: An election takes place in Maradaine during your novel. How do you think Minox and Satrine would react to the election taking place in the U.S. right now?

MRM: Both of them would probably think, “Yeah, that’s an election, all right.”  They’re used to stories of outright fistfights on the Parliament floor and partisans using truncheons to effect outcomes, so our election might seem downright tame.  Of course, as is the case with any election, people have to go on with their lives.  Minox and Satrine have a case to solve, and that comes first.

PRH: Your novel could be described as part fantasy, part mystery. How much attention did you pay to weaving the two genres together? Were you conscious of it?

MRM: For me, the mystery is the bones, and the fantasy is the flesh. The two elements are both intrinsic to the whole story, of course, but the mystery part is the structure that holds the plot together, while the fantasy is what makes it move.

PRH: Minox is a mage, although he tries to conceal it and is untrained. Did you turn to any particular works of fantasy, novels or otherwise, as a jumping off point when crafting his powers and lineage?

MRM: Funnily, I put a lot work into his lineage, but that was incidental to his magical abilities. I did that because I wanted to work out his family, which is deeply-entrenched  in the constabulary. Since he can’t be a trained mage and in the constabulary, he chooses the latter, because that’s what’s in his blood.

PRH: You really flesh out the world of Maradaine—from its culture to its politics—in this book. What went into the world building for you? Did any writing exercises in particular spark inspiration?

MRM: The worldbuilding exercise I lean toward is going to food.  With each culture, I ask: what are they eating, what are their crops and livestock, how are they using them?  Those are the things that give a people the most definition.

PRH: What’s your writing routine? When, where, and how does it happen?

MRM: I don’t have a set place in my house, so sometimes it’s in a chair or on the couch with a laptop desk, sometimes it’s on the walking desk, sometimes I’m spread out on one of the tables. It varies. When is usually late. I think I programmed my creative energy back when my son was little, where I really could not sit down to do the work until after he had been settled into bed. So that means my creative energy REALLY kicks in around 11pm. Usually it involves me putting on headphones and telling everyone else not to bother me until I finish for the night.

PRH: The Maradaine Contabulary isn’t your only series set in Maradaine. Why did you choose to write more than one series set in the same world? Do you have any plans for a third?

MRM: A third series—The Streets of Maradaine—launches next year with The Holver Alley Crew. The multiple series came about because I needed to keep writing while trying to sell the novels. I had finished the first Maradaine novel, The Thorn of Dentonhill, and was sending it out to agents, and I had to keep writing while querying agents, and while it was out on submission once I had an agent. Since I had A. done all the worldbuilding of the city and B. didn’t know if Thorn was going to sell or not, it made more sense to put my creative energy into a different series in the same setting.  So I wrote several “book one of a series” books set in Maradaine in that time, which became A Murder of Mages (The Maradaine Constabulary series), The Holver Alley Crew (The Streets of Maradaine series), and a fourth one which is still in development.