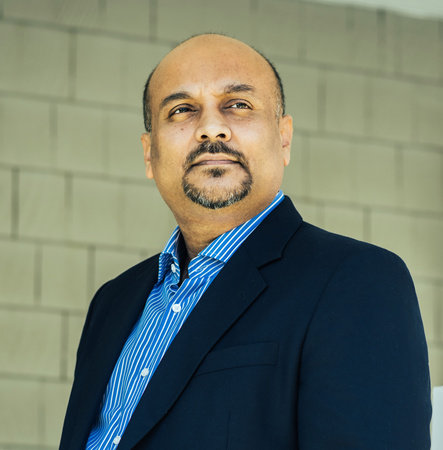 Yudhijit Bhattacharjee is an award-winning writer whose features and essays on espionage, cybercrime, science and medicine have appeared in The New Yorker, The New York Times Magazine, National Geographic, Wired and other U.S. magazines. Yudhijit spent 11 years as a staff writer at the weekly journal Science, writing about neuroscience, astronomy and a variety of other topics in research and science policy. His work has been anthologized in the Best American Science and Nature Writing series. Yudhijit has an undergraduate degree from the Indian Institute of Technology, Bombay, and a master’s in journalism from The Ohio State University. He lives in a suburb of Washington, D.C., with his wife, his two children and a big red dog.

The Spy Who Couldn’t Spell

Penguin Random House recently corresponded with Yudhijit Bhattacharjee, author of the The Spy Who Couldn’t Spell, the nearly unbelievable story of a debt-saddled government worker who turned to espionage in an effort to ease his financial woes. We chatted with Bhattacharjee, an award-winning and accomplished writer, about espionage, climate change, and more. Read on.

PENGUIN RANDOM HOUSE:The amount of detail you provide to the reader in re-creating the story of Brian Regan in your new book, The Spy Who Couldn’t Spell, is astounding. Is all of this detail based directly on research? How were you able to get such access to it all?

YUDHIJIT BHATTACHARJEE: I was fortunate to be able to do dozens of hours of interviews with FBI agents who were intimately familiar with the case. It helped that some of them – especially the lead case agent, Steven Carr – had such good recall, and I was able to use the recollections of each interviewee to further probe other interviewees. I also got some details from court transcripts and documents released through Freedom of Information requests. The FOIA documents were blacked out nearly ninety-five percent by redactions but the remaining five percent of the information provided clues to what other avenues of reporting, and what other questions to pursue.

PRH: Your own resume is so deeply steeped in science and technology – yet you write with the narrative know-how of a seasoned thriller author. Is this due to an innate talent for storytelling? Or was it a challenge for you to write in this style? If the latter, how did you go about accomplishing it so well?

YB: I spent many years working at SCIENCE magazine, learning how to do explanatory journalism. But I’ve always been fascinated by the study of characters and, in my later years at SCIENCE, I was lucky to find and report a number of character-driven narratives within the world of science. It taught me that stories need to have a beginning, middle, and an end for readers to stick with it to the conclusion. You have to describe events through the eyes of the characters who are experiencing those events as they unfold, often without knowing how those events will end.

PRH:Regan was a bumbling sort of spy, in that he made careless mistakes – leaving a piece of a map behind on a subway, or a post-it with his name and extension on a buried package of evidence. His general awkwardness attracts negative attention, often in the form of mockery. His dyslexia often led to aberrations in his enciphering work. And yet he still managed to find his way into foreign embassies, with information whose release would be calamitous to the United States. If he could get that far, imagine what a savvier, slicker character could do. Do you think Regan’s story should ultimately put us at ease in that he was caught? Or make us even more uneasy, given his unlikely progress in espionage?

YB: I would say it’s alarming and reassuring at the same time. It’s scary that he got as far as he did. If the FBI hadn’t been tipped off, he would eventually have made contact with foreign intelligence agents who took him seriously. But it’s comforting that investigators were able to stop him before he could do any real damage, and that they were eventually able to recover all the secrets he had stolen.

PRH:In your opinion, is there anything the government – specifically the National Reconnaissance Office – could or should have done at the time to prevent Regan from getting as far as he did with his plan to commit espionage?

YB: There was definitely a lapse in security at the NRO. When Regan was spending all those months searching for and downloading imagery and documents that had nothing to do with the specific job he had, somebody on the security side of the NRO’s operations should have noticed. More important, Regan’s activity on Intelink, the network of classified servers that he was searching, should have triggered an alert automatically. And it’s certainly shocking that he was able to print these documents out and simply carry them out of the building without being checked even once.

PRH:You make the point that the FBI could have learned quite a bit from their experience with Regan in regard to digital fortification that would have helped to avoid subsequent incidents – including the NSA leak involving Edward Snowden or Julian Assange’s various hacks for Wikileaks. What specifically should they have taken from this case?

YB: Well, it wasn’t for the FBI to learn from the experience. The entire intelligence community should have taken some lessons. I believe the NRO made a number of improvements to its digital security, but clearly many other agencies, including the NSA did not. They should have set up better systems for monitoring their employees’ digital access and carried out frequent audits.

PRH:Surely there is so much that goes on behind closed government doors in regard to national security that we civilians are unaware of. Should we be made privy to more information in an effort toward education and knowledge? Or are we currently made aware of just enough, keeping us informed but still affording our government the secrecy and privacy they need in order to keep us as safe as possible?

YB: I think the government has a legitimate reason for keeping a lot of military and intelligence information classified. It can be argued that the secrets themselves – to a greater or lesser extent – must remain secret to civilians. But how agencies collect, manage, and guard those secrets is a different matter that the public should be more knowledgeable about. That’s necessary to keep the intelligence community accountable for doing its job.

SIG: Regan’s primary motivation had nothing to do with politics or patriotism; it had to do with money. His credit card debt, amounting to more than $100k, was what ultimately drove him to try to sell U.S. government intel. From your own research and experience, which do you think is the more common motivation in cases where a person betrays his or her country: Personal circumstances like money? Or personal conviction and/or politics?

YB: Money has been the most powerful driver in cases from the past thirty years, I would say. But during the Cold War, there were traitors who were motivated by allegiance to a different political ideology.

PRH:There are varying and passionate opinions about whom or what in this country puts us most in danger of foreign attack. Those opinions may be fueled by any number of things: ignorance being chief among them. In your opinion, what is the biggest threat to our nation’s national security?

YB: I think we face both internal and external threats. The existence of jihadi organizations like ISIS, which could go to any lengths to destroy the United States, is a major threat. At the same time, we can’t overlook domestic terrorism by disgruntled and radical groups within the country. They could tear the fabric of this country apart.

PRH:Turning to fictional spy stories, are there any movies, books or shows that you think have portrayed the inner workings of a spy network or investigation quite accurately?

YB: “The Americans” is a good show. It’s accurate in many respects, based on what I’ve learned from my reporting of espionage cases.

PRH:Thinking now about the current political landscape and tapping into your own science expertise, what should our next president be addressing from the realm of science in the next four years?

YB: The next administration should step up efforts to address climate change. We don’t have any more time to debate whether it’s happening or not – the scientific evidence has been overwhelming for years now. And at the risk of sounding clichéd, I will say that energy – which is very much related to climate change – should be another big priority.

PRH:You are quite prolific in the world of science journalism; will you perhaps write a book an any one area of science in the near future? If so, on what?

YB: I’m thinking about a few ideas, and the most attractive one has to do with science, but I’m convinced the next book will meld multiple case studies with explanatory journalism.