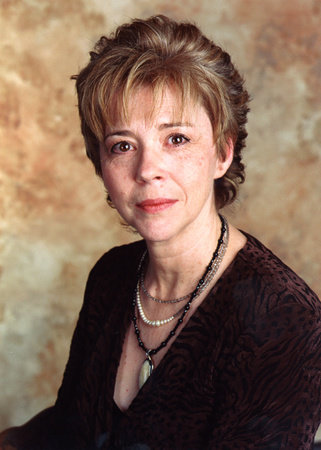 Mary Doria Russell has been called one of the most versatile writers in contemporary American literature. Widely praised for her meticulous research, fine prose, and compelling narrative drive, she is the New York Times bestselling and award-winning author of The Sparrow, Children of God, A Thread of Grace, Dreamers of the Day, Doc, and Epitaph. Dr. Russell holds a Ph.D. in biological anthropology. She lives in Lyndhurst, Ohio.

Tell us about the research you did for DREAMERS OF THE DAY. Your details about the landscape, cars, and 1920s clothing are so vivid as if you were there. Have you traveled to the Middle East?

Well, I started writing Dreamers just as the U.S. was getting deeper into two wars in the Middle East. Not a great time to travel there. Also, Cairo has been largely rebuilt since 1921. Except for the pyramids, not much of what I write about is still in existence. So I relied on a big pile of traveler’s memoirs from the first three decades of the 20th century.

Tell us something we may not know about Lawrence of Arabia.

He was something special even when he was just a punk undergraduate. People saved his letters long before he became a celebrity after the first World War, which is why we know so much about his childhood and adolescence. Of course, he was known for the exploits portrayed in the great David Lean film Lawrence of Arabia, but after his sudden death at 46, the most touching remembrance of him was an account by a young wife who’d miscarried her first pregnancy. She tells of Lawrence sitting at her bedside, just talking through all the fears and sorrows and distress she must have felt–"and from a woman’s point of view, not a man’s." She wrote, "After that, of course, I simply loved him." He inspired great affection and devoted friendship across a wide spectrum of humanity, from Beduin tribesmen to that young British woman.

What inspired you to set your story during the Cairo Peace Conference?

When Osama bin Laden took "credit" for the attacks on 9/11, he mentioned that they were, in part, in revenge for the "catastrophe of 80 years ago." Now, usually, when Arabs refer to "the catastrophe," they are talking about the foundation of Israel, and I thought, "What happened in 1921?" I was still working on A Thread of Grace then, and just sort of put the curiosity about 1921 on a mental shelf. When I finished Thread, I was exhausted and decided to take a year off to read for pleasure. Something brought T.E. Lawrence back to my mind–I’m one of the many Baby Boomers who saw the film in 1962 and were massively influenced by it. I read everything about Lawrence back when I was a teenager, but I am now far older than Lawrence was when he died. I thought, I should go back and read those biographies again, with an adult’s experience of the world. And there it was: the 1921 Cairo Peace Conference. The catastrophe that Arabs remember but we in the West have largely forgotten. Instead of taking a year off, I started Dreamers of the Day exactly 36 hours after I sent the manuscript for A Thread of Grace to the publisher!

Your main character, Agnes Shanklin, is (at first) a plain, frizzy-haired schoolteacher from Ohio, who makes radical changes in her life. Is she, pre or post-makeover, based on anyone you know?

Agnes Shanklin is named for my high school English teacher, freshman year. She was a tiny lady whose gray hair was still cut in a 1920s bob. She was a wonderful teacher, but what I remember most are the occasions when a radical political opinion would suddenly erupt like a solar flare! Eventually, it occurred to me that–shock, shock–Miss Shanklin wasn’t always a little old lady. She was a teenager in the Roaring Twenties, and I realized that she might have had a past as daring as anything we had in the Sixties. So that’s the germ of the idea for the character I named in her honor. As for the makeover? Well, who doesn’t love a makeover? Even my husband watches What Not To Wear. It seems so shallow, but it isn’t really–how you present yourself, how you dress, all that can truly affect how you see yourself and how you feel about yourself. A makeover can change a life, and that’s what happens with Agnes. She redefines herself and comes into her own.

Have you ever taken a trip that’s changed your life?

When we were 15, my girlfriend Ruth Kaplan and I applied to the Universidad Ibero-Americana in Mexico City. We were accepted into a program that placed us with a lovely Mexican family. We lived with them for six weeks while studying Spanish poetry and Mexican anthropology. Looking back, I’m amazed that our parents let us go. Ruth and I were so young! But we just got on the train and went south from Chicago to Mexico City, and we did fine. Astonishing, when I think about this… Anyway, I learned that studying other languages opened doors to experiences that are simply impossible otherwise, and that I could jump into another culture and country and be okay, and that people were helpful and friendly, and that laughter sounds the same in any language. That set the tone for a lifetime of learning and travel.

What is the latest news on the film deal for your earlier book, The Sparrow, which is slated to star Brad Pitt?

Well, I’ll tell you. We’ve been through this whole process twice. Once at Universal with Antonio Banderas, and now at Warner Brothers with Brad Pitt. We get very close, and then the project is shelved and the option expires. As the screenwriter Michael Seitzman told me, "It’s not a movie until the cinematographer is on the set eating a breakfast burrito." Of course, the longer we delay, the cheaper and better the special effects get.

Your books, which have all been well-received and translated around the world, are all very different–The Sparrow and Children of God are set on other planets, about three species, and A Thread of Grace is a sweeping World War II epic. Which setting and characters have you enjoyed inhabiting the most?

I have favorites from every book. I loved Emilio Sandoz, of course, but my favorite characters from that book were John Candotti and Brother Edward Behr. In Children of God, I loved poor Gina, even though I broke her heart. And I always enjoy writing children–Celestina in Children of God and Angelo in A Thread of Grace. To catch the reality of a child’s view of things, and to make it psychologically realistic, and to express it in language that’s right for a four-or seven-or nine-year-old–that’s immensely enjoyable for me. All that said, I have to admit, Agnes Shanklin is my very favorite character so far. She tries so hard to be delighted that her very own sister was going to live in the Middle East after marrying the man poor Agnes thought might be her own. And then when she admitted that her little dog’s devotion made her feel beloved for the first time in her life… How sad is that? But like the Miss Shanklin who taught freshman English at Glenbard East High, in the 1960s, Agnes finally knows herself to be a person of conviction and strength, and she is quite a woman in the end.