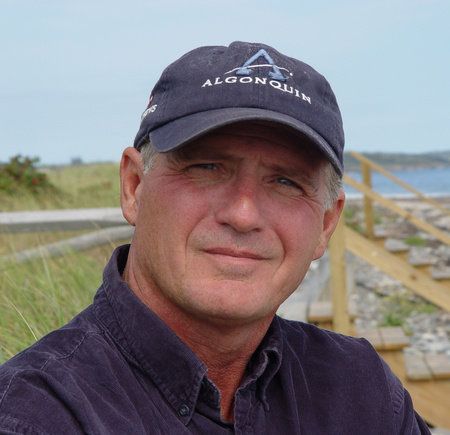 Don J. Snyder is the author of many acclaimed books, including the memoirs The Cliff Walk and Of Time and Memory and the novels Night Crossing and Fallen Angel.

Sign me up for news about Don J. Snyder and more from Penguin Random House


In August of 1998 I was trying to finish writing a book about my mother who I had never known, who died in 1950, a few days after giving birth to me and my twin brother. I was having a difficult time with the book and one morning at work I was giving up, just staring out the window, when I heard on the radio that there had been another bombing in Northern Ireland. Not many details were given at first, but for some reason I was drawn to the story. Throughout the day I listened to the radio and just before dinner I heard that among the people killed in the blast was a mother with twins in her belly two weeks from birth. No matter how I tried, I couldn’t stop thinking about this.

Two days later I flew to Belfast, Northern Ireland and took a bus to the small city of Omagh where the bomb had exploded. From the moment I arrived I was struck by the silence of the city. The only sound in the streets was the rain striking the plastic wrapping of the thousands of flower wreaths and bouquets that leaned against the store fronts down the length of High Street from the courthouse, along Market street, around the corner of the old Dublin Road and across the Drumagh Bridge. There were also hundreds of candles guttering in the cold wind and rain. People stopped to pour the rain water off those that had gone out, then knelt down on the wet bricks and re-lit them. Some of the front windows of the hotel where I stayed had been blown out by the blast. I attended thirteen funerals in two days, following the processions through the city and out into the countryside to rural cemeteries where friends had filled the open graves with flowers.

Eventually I made my way to the grave of Avril Monaghan, the mother who had been killed with the twins in her belly and her three-year-old daughter who was holding her hand. Avril had been from the farming village of Augher where I walked a narrow road to Saint McCartin’s church for two miles through the deep green hills of the Clogher valley, passed tin roofed barns, grazing tan sheep and cows with noses shining from the wet grass. The little calves ran in fear to their mother’s side when I passed by on foot. Inside the ancient black stone walls of the churchyard there was the new grave. Flowers in the shape of teddy bears. Plastic bottles of Holy water. Little statues of the blessed mother and the pope.

I was paralyzed by the sadness of this loss and that night in a pub in Omagh I began asking how I could speak with someone in the IRA. I said that I was a writer and I was trying to understand how the IRA could murder women and children and destroy the lives of innocent people. It took only a few hours before I made a contact who set up a meeting for me in a hotel in the town Port Rush, on the North Channel of the Irish sea. The man was dressed like a college professor. But he was angry, I could see from the moment he walked in. And as soon as he sat down he took a photograph from his leather satchel and placed it on the wooden table between us.

"Do you know where that is?" he asked bitterly. I didn’t recognize the place and he told me what I was looking at: The photograph showed the court house and the granite steps in front of the court house in Omagh where three British soldiers in uniform and two policemen in uniform stood smoking cigarettes.

"This photograph was taken ten minutes before the bomb went off," he said emphatically. I told him that I didn’t understand.

"What don’t you understand?" he said. "There’s an army base in Omagh. Over two hundred British soldiers are stationed there. Do you know what they do every Saturday morning? They go shopping in the town center. How many people were killed in the bombing?"

He waited a moment then looked into my eyes and told me that British Intelligence had reversed the warning.

"Reversed the warning?" I said. "Meaning what?"

"Meaning what?" he said. "Look. The warning said that the bomb was in the center of town and everyone was to be evacuated to the courthouse at the top of High Street. Instead, they sent everyone into the blast. While the soldiers and the police stood safely on the court house steps with the pigeons."

He looked down at the photograph again. "This isn’t the first time this has happened," he said.
I didn’t believe him of course and I asked him what purpose this would serve. He smiled derisively. "Turn the Irish people against their own army," he said.

I stayed another three days in Northern Ireland and wrote the first 92 pages of the Night Crossing. It just fell into my mind. An American woman walks into the center of this evil plan and she cannot walk out until she is changed, just as we should all be changed by these devastating events in the world.

I wrote this novel to try to make the world take notice of the victims from the Omagh bombing. Now, almost three years later, what still strikes me is this: The peace talks had stalled over a single issue, the IRA was refusing to lay down their weapons. After the bombing in Omagh so much pressure was brought against the IRA that they agreed to decommission. It appears that the victims of the Omagh bombing saved the peace process, enabling negotiations to go forward.