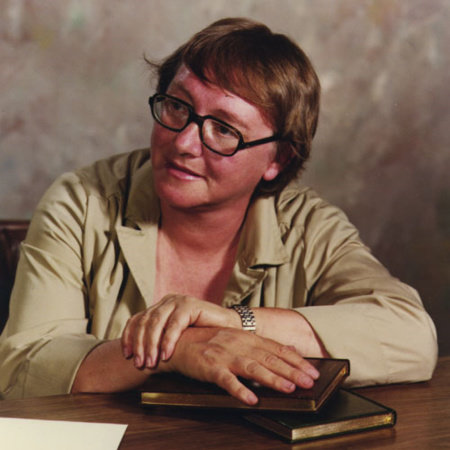 Marion Zimmer Bradley was the New York Times bestselling science fiction and fantasy author of the Avalon series, the Darkover series, and more. In addition to her novels, Mrs. Bradley edited many magazines, amateur and professional, including Marion Zimmer Bradley’s Fantasy Magazine. She died in 1999 and was posthumously awarded the World Fantasy Award for Lifetime Achievement in 2000.

The Children of Kings

A Flame in Hali

To Save a World (Darkover Omnibus #7)

Below is a letter from Diana L. Paxon, Marion Zimmer Bradley’s sister-in-law, fellow author, and longtime collaborator. Her deep friendship with Bradley, who passed away in 1999, and respect for Bradley’s writing shines through in her letter, shedding new light on the inspiration behind THE MISTS OF AVALON.


Marion Zimmer Bradley died on September 25, 1999. During the week after her passing, my in-box filled to overflowing with messages from people who mourned her. They came from women and men, science fiction fans and pagans, Anachronists and people from all of the many other communities who appreciated her many novels; but above all, they came from readers who loved The Mists of Avalon.

In Marion, I lost not only a favorite author, but a sister and a friend. I had known her for over thirty years, and when I married her adopted brother, writer Jon DeCles, I became part of her family. For many years my husband and I shared a house with her brother Paul Edwin Zimmer (also a fantasy writer) and his family, and her mother lived with us until she died.

Marion read my first attempt at a novel, and read it again after I followed her advice and re-wrote it. We worked together as priestesses in the Women’s Spirituality movement and founded Darkmoon Circle, which is still going strong today. Once I had become established as a writer, we traded ideas and manuscripts. When she wanted to do an anthology of work by people associated with our extended family and virtual writer’s colony, she named it after my house, Greyhaven.

But when Marion first announced her intention to do an Arthurian novel I was skeptical. Surely, after T. H. White and Rosemary Sutcliffe’s modern treatments of the story, there was nothing left to be said. Nonetheless, she knew that I had specialized in medieval literature in graduate school, and when she came to me for resources, I was glad to give what help I could. Not that she needed much, for she had been steeped in the Arthurian tradition since childhood.

I read the first chapters of what became The Mists of Avalon with a mounting excitement, for Marion had, indeed, found a new approach to the legend, one with particular relevance to the culture of the day. But I should not have been surprised–one of Marion’s great gifts as a writer was to say something, at just the right time, that some group of people very much needed to hear. This time, it was an exploration of the role of the women in the legend of King Arthur–and in her hands, it became a deeply evocative story of women’s struggles to survive in a masculine world.

In particular, it was a story of a woman’s spiritual quest. The spirituality of Avalon derives from the British Mystery tradition, especially as it was interpreted by the occult writer Dion Fortune, whose character, Miss LeFay Morgan, is both a progenitor and descendant of Morgaine. In addition, Marion drew upon Dion Fortune’s non-fiction book, Avalon of the Heart. For a time, Dion Fortune lived in Glastonbury, home of the Glastonbury Tor and still a sacred center of pilgrimage for many.

Although Marion traveled to the British Isles several times to visit Arthurian sites and do research, she realized early on that in order to be true to her vision she would have to abandon history, and instead, tell the truth of legend. The brilliant device of placing Avalon halfway between our world and Faerie allowed her to adorn it with structures and a society unknown to archaeology.

The Arthurian legend holds a unique place in the literature of the English language and seems to be capable of infinite reinterpretations. My own version, Hallowed Isle, is more faithful to history, but The Mists of Avalon casts a long shadow, which I avoided only by placing my priestesses in the Lake Country in the north of England!

For years after Mists was published, women continued to come to Darkmoon Circle looking for the College of Priestesses on Avalon. They were not misled, for the quality of interaction among the women, as well as much of the spirituality, reflects the atmosphere in the circle. It was a time of great excitement, as we realized that it was possible to create a religious practice that would meet our needs, and that the Goddess, far from being confined to ancient mythology, was alive, well, and eager to communicate. What Marion was describing in the new book–which she had originally wanted to call Mistress of Magic–was what we were experiencing every time we came together.

But no one expected what happened when The Mists of Avalon was published. Some of its success was no doubt due to the editorial and promotional genius of Judy Lynn Benjamin Del Rey, who got the book reviewed in the New York Times. But the rest has to be put down to Marion’s ability to resonate with the zeitgeist. Glowing reviews certainly helped, but what made the book a bestseller was word-of-mouth publicity, and that’s what keeps it selling today. People bought and read and loved it, then bought copies for their friends. Suddenly Marion found herself world-famous.

This was not what she had expected, especially when people began to phone her in the middle of the night wanting spiritual counsel. Morgaine herself could not have fulfilled all the expectations being laid upon the author of The Mists of Avalon. Marion continued to write, but she began to withdraw from public life.

Her health was also beginning to fail. To the heart trouble from which she had suffered for many years was added diabetes, and then a series of strokes. She managed to complete the first draft of The Forest House, a story based on the opera Norma that she had wanted to tell for many years, but it showed the effects of her illness, and she asked me to help her revise it. We were both pleased with the result, even though there was not much we could do to make Gaius nicer–his character, after all, is based on the opera’s tenor role.

As I discussed the book with Marion, I came to understand the place of the Avalon mythos in her work much more clearly. Not only were the characters in Forest House ancestral to the later people of Avalon, but Marion considered several of them to be reincarnations of the major characters in her early occult novel, which was eventually published as The Fall of Atlantis. That suggested a further development of the mythos, and we proposed a new project, Lady of Avalon, which takes the characters through three incarnations; the first section being a continuation of the story line in The Forest House, while the third tells of the youth of Viviane and helps explain how she got that way. Our last collaboration, Priestess of Avalon, surrounds the middle section of the previous book with the story of Helena the mother of Constantine. In Priestess of Avalon, I have taken the opportunity to try and show not only Helena’s spiritual quest, but Marion’s religious position, which was that of a student of the Mysteries who could find truth and inspiration in both Christianity and paganism. The vision at the end of Mists in which the Goddess takes the form of the Virgin Mary expresses a truth beyond dogma.