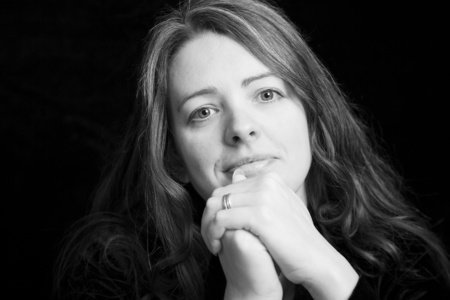 Emma Newman is the author of Planetfall, After Atlas, Before Mars, and Atlas Alone and is also a professional audiobook narrator, narrating short stories and novels in all genres. She also cowrites and hosts a Hugo nominated podcast called “Tea & Jeopardy.” Emma is a keen role-player, gamer, and designer-dressmaker.

Sci-fi murder mystery After Atlas was released this week, and we were lucky enough to ask the author a few questions about the novel. Emma Newman is a prolific author, audiobook narrator, and host of the podcast, “Tea and Jeopardy,” so naturally, she had lots of interesting and insightful things to say, ranging from the dangers of charismatic personalities to the different perspectives of social classes.

PENGUIN RANDOM HOUSE: After Atlas is set in the Planetfall universe, but isn’t a direct sequel. Do you recommend that people start with Planetfall, or can they start with either of the two books?

Emma Newman: They are both genuinely standalone and readers can start with either book. Nothing would be spoiled, but if After Atlas was read first there might be a slightly different emotional experience when reading Planetfall.

I’m coming to the end of writing a five book urban fantasy series that really does need be read in order. That’s quite a commitment for readers, and I didn’t want to replicate that with my science-fiction novels. It’s a lot less stressful for me too!

PRH: Both of your Planetfall books feature leaders with incredibly magnetic personalities. What inspired these characters? Were you thinking of specific people in history or fiction when you wrote them?

EN: Yes and no. It was a combination of plausibility and drawing from research. In Planetfall, the charismatic leader, Mack, has to have enough presence, gravitas and social skills to hold that colony together for twenty years without the woman who led everyone there. If he didn’t have those qualities, and the manipulation skills he employed on Earth before they left and later in the colony, the story simply wouldn’t make sense. I didn’t have anyone in mind when writing him.

It could be argued that Lee Suh-Mi, the Pathfinder herself who leads everyone to that distant plant must have been charismatic to achieve that. But I saw her as magnetic in a very different way. She has the power of the purest belief in what happened to her, and demonstrable genius, but she doesn’t have the showmanship which Mac has in spades. That’s why she needed him to get the Atlas project off the ground. I find it endlessly frustrating that in today’s media driven society, it isn’t necessarily the best person that gets critical jobs (especially in politics), it’s the ones who can be the most charismatic on screen. I’m not convinced that all of the skills required to be a leader overlap perfectly with the skills required to attain and keep positions of leadership.

As for Alejandro in After Atlas, as a cult leader he too needed to have particular qualities to be plausible. I researched some cults and their leaders, and what struck me was how much power they manage to command over people. That emerged as one of the themes of the book in fact; an exploration of the deep and lasting damage that can be inflicted by the sort of person who is charismatic enough to hold so many people in thrall to their ideals and vision. I didn’t have a specific cult leader in mind when I wrote him, I just absorbed some details about several and he grew out of the mulch.

PRH: From Artificial Personal Assistants and 3-D printed foods, to precise virtual reality reconstructions of crime scenes, the technologies you describe are terrifyingly real and impressive. How did you come up with these advancements? Was there a lot of research involved, or did you already have the concepts vaguely in mind?

EN: I follow real world technological developments with great enthusiasm and have been excited about 3-D printing, synthetic biology and the interface between humanity and AI for many years. All of the tech featured in Planetfall and After Atlas is a result of daydreaming about logical extrapolations from what we already have, right now. For example; people have been 3-D printing food for years. All I did was think about a possible future where that has become so sophisticated and cost effective that it’s effectively become part of our food infrastructure, like microwave ready meals have. There will always be people who will refuse to eat processed food, who will always cook from scratch with fresh ingredients – if they can afford to do so – and so they exist in my books too because I don’t think future technology will be experienced in the same way by everyone.

In Planetfall I had a lot of fun envisaging a technological utopia; a colony that is constructed with sustainability and strict environmental protection rules built in at the very core. There are so many things we could  (and in my opinion should) be doing with new builds in construction today and it makes me so frustrated that so many opportunities are being lost. In Planetfall, I wanted to explore just how wonderful technology – most of which already exists today – could be developed to give us a luxurious standard of living, yet still limit its impact on the environment.

PRH: Privacy, or the lack thereof, is a huge part of the world in After Atlas. Do you see us moving towards that kind of constantly monitored and interconnected future?

EN: I think we are already well on the way to it. In the UK, we’ve been living with an extraordinary amount of CCTV surveillance for many, many years.  There have been several major revelations about the way our online lives are already monitored. Perhaps in many ways we’ve already arrived there.

As for being interconnected, it’s deepening in so many ways, from global trade to social media. What I find utterly fascinating is that despite so many tools and different ways for us to converse and learn more about each other, there are still so many barriers. Whether it’s the traditional bastions of mass media, continually fuelling hate and distrust between communities, the polarisation caused by Facebook algorithms, or trolls attacking people online, it feels that for every step forwards, we take several back.

Oh dear, that sounds rather miserable, and in many ways I am usually an optimist. However, I have had to live through the insanity of Brexit for the past few months and it is utterly soul destroying.

PRH: In After Atlas, governments have blended with corporations, and contracts amounting to slavery seem common. This all appears quite dystopian, but we’re also seeing everything through Carlos’s eyes. How does the average citizen of this world view the current state of affairs?

EN: For many people, comfortably within a certain socio-economic band, I imagine they would be fairly content with the way things are. It’s at the extremities where there will be vastly different experiences. For Carl, it’s indentured slavery. For others that he interacts with at the opposite end of the wealth scale, the world is a playground.

In other words; just as it is today. There are so many metrics we can point to and say: Life has literally never been better for humanity as a whole. We are, on average, healthier, living longer and there are fewer wars being actively fought than ever before. However, there is a world of difference between the experience of someone who is working in a sweatshop and the person on the other side of the world, wearing the clothes they’ve made.

PRH: You’ve written across several different genres throughout your career, and After Atlas is itself both a science fiction novel and a murder mystery. Does your writing approach differ at all depending on genre? Do you tend to prefer one genre over another?

EN: I don’t have a preference of one genre over another, but I do feel more comfortable writing deeper, single person POV character studies in the science-fiction genre, rather than urban fantasy. Not that I believe that has anything to do with the genres themselves, it’s just the way things have shaken out for me.

My urban fantasy novels have more complex plots with multiple POVs and span multiple versions of reality. The science fiction novels are first person, present tense, up close and personal. Writing them feels different for those reasons, more than because of the difference in genre.

All of my books are character driven, and that’s just as true for the Split Worlds series as it is for Planetfall and After Atlas, so my overall approach is always the same. I do just as much research for all genres, it’s just that the subjects are different. Whether I’m researching the ancient kingdoms of the British Isles to underpin the world of the sorcerers in the Split Worlds or exploring out how protocell technology could be used to process waste in houses of the future, the work still needs to be done and I enjoy all of it equally.

PRH: Do you have any ideas for what’s next in the world of Planetfall, and can you give us any hints?

EN: I have very strong ideas, as I’ve already started writing the next book set in that universe! As someone who hates spoilers with a passion, all I’m willing to say is that it will be another standalone and it will be set on Mars.