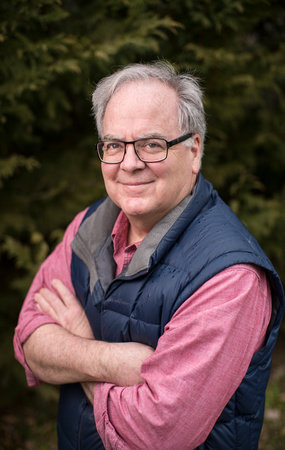 HENRY FOUNTAIN has been a reporter and editor at the New York Times for two decades, writing about science for most of that time. From 1999 to 2009 he wrote “Observatory,” a weekly column in the Science Times section.  He was an editor on the national news desk and the Sunday Review and was one of the first editors of Circuits, the Times‘ pioneering technology section. Prior to coming to the Times, Fountain worked at the International Herald Tribune in Paris, New York Newsday, and the Bridgeport Post in Connecticut. He is a graduate of Yale University, where he majored in architecture. He and his family live just outside of New York City. Learn more at henry-fountain.com.

Henry Fountain’s new book, The Great Quake, tells a compelling tale about the 1964 Alaska earthquake – the largest earthquake in North American recorded history – and the geologist who was relentless in his pursuit for answers to explain how the disaster took place. His book brings the earthquake to life through vivid imagery and detail, and demonstrates the brute force of nature, an uncontrollable power that can wreak heavy damage on the places we call home. Henry recently delved into the Alaska earthquake, how being a reporter helped him to write his book, the research and personal experience that contributed to the development of the story, and more in this enlightening conversation.

PENGUIN RANDOM HOUSE:The Alaska earthquake of 1964 was the biggest ever recorded in North America, and the second-biggest recorded in the world. Can you give us a sense of what people saw and experienced during it?

HENRY FOUNTAIN: Alaskans experienced things during this quake that few, if any, people have experienced before or since. Here’s how beyond normal it was: Many people thought that the Soviet Union had dropped an atomic bomb and that World War III had begun.

Many large earthquakes of this type – so-called megathrust quakes – occur offshore, in the ocean. But this one struck among the islands and fjords of Prince William Sound, and the state’s biggest city, Anchorage, was only about seventy-five miles from the epicenter. So much of the state’s population experienced the tremendous shaking, which lasted for a nearly interminable five minutes.

The quake made the ground act like water, rippling as the seismic waves passed through it. Many people watched trees flapping back and forth, their branches touching the ground in many cases. Others saw buildings curling like a cracked whip. Drivers held on for dear life as their cars bounced around.

Some buildings toppled over; others fell apart from the shaking. In Anchorage, Valdez and many other places, all the shaking made the ground slump and slide, with devastating effects. Huge waves caused by collapsing sediments inundated coastal areas in Prince William Sound. Tops sheared off mountains, causing huge rockslides. The 1964 earthquake was an event without parallel in modern times in North America.

PRH: As a reporter for The New York Times, you’ve covered various disasters and scientific breakthroughs for nearly twenty years. What was it about this particular event that made you want to write a book about it?

HF: I first became aware of the 1964 quake in college, when a friend of mine who collected old recordings played for me an audio recording that had been made by someone in Alaska while the quake was occurring. I don’t remember who the person was or why he happened to have a tape recorder going, but the tape was amazing: It sounded like a freight train was barreling through his house, and although he tried to remain calm as he described what was happening, it was clear he was terrified. Just listening to it decades later was terrifying.

Later, when I became a science writer and started writing about earthquakes, I became more intrigued by the 1964 quake. It was remarkable to me that more recent, and hugely destructive, earthquakes in the Pacific – the 2004 quake that caused tsunamis around the Indian Ocean and the 2011 Japanese quake that led to the Fukushima nuclear disaster – were actually less powerful than the Alaska quake. Then, around the time of the fiftieth anniversary in 2014, thanks to Peter Haeussler and others at the U.S. Geological Survey, I learned more about the investigation into the quake by George Plafker and its role in the development of the theory of plate tectonics.

Whenever I talked to friends and colleagues about the 1964 disaster, I realized practically no one knew anything about it. Few also knew that in the mid-1960s, plate tectonics – which is now a cornerstone theory of science – was still a subject of much debate. So I thought it would be good to write a book that told the story of this incredible event, of the work George Plafker did to understand it and the role it played in the history of science.

PRH:The Great Quake weaves together the intense human toll of the quake with the scientific research into what happened, and why. Was it difficult to strike this balance?

HF: I’d say it was an enjoyable challenge. I had two great stories to tell – actually far more than two, when you consider the individual accounts of quake survivors and some of the history of the places that were destroyed – and I didn’t want to give short shrift to either of them. So I worked out a way to go back and forth between the human and scientific stories.

PRH:What was it like to talk with survivors of the quake? Are they still affected by that experience?

HF: I’d say anyone who lived through that event is still affected by it. It would be hard not to be. Some Alaskans don’t like to talk about it, so when I encountered that kind of reluctance I didn’t pry any further. However, most of the people I ended up talking to were quite willing to describe their remembrances of that day and the aftermath. But a half century is a long time, so it was also very useful to read firsthand accounts gathered shortly after the quake, when memories were freshest. Many of those accounts, as it turns out, were gathered by none other than George Plafker himself, who interviewed dozens of Alaskans in the days after the quake.

PRH:The Alaska quake took place in a territory that had only recently become a state, with relatively few cities and people. What would the impact have been if a quake of that magnitude had happened in a more populated metropolitan region, such as the Pacific Northwest?

HF: A similar quake in the Pacific Northwest would probably have been the greatest disaster in the history of the United States. A quake of magnitude 9.0 or higher is a huge event that releases enormous amounts of energy and causes the ground to shake for minutes. The longer and more violently the ground shakes, the more damage is done to buildings and other structures, and the greater the likelihood of destructive waves.

This is more than a hypothetical question. Most seismologists think a major megathrust quake in the Pacific Northwest is just a matter of when, not if. Such a quake is likely to be a major disaster that will test the ability of the region to recover.

PRH:You spent a great deal of time with George Plafker, the geologist tasked with exploring the aftermath of the quake. What can you tell us about him? Is he still active in the field?

HF: I interview a lot of scientists for my work at the Times, and I’d say that George Plafker is the most intuitive one I’ve ever met. You have to understand that when he started investigating the earthquake, he was a basic resource geologist who was assigned to work on the quake not because he knew anything about earthquakes – he didn’t – but because he knew how to get around in backcountry Alaska. Yet over time he learned seismology and geophysics and was the first to recognize and describe a megathrust earthquake – something we take for granted today.

Now in his late eighties, he’s hardly slowed down. He still spends most weekdays at the U.S. Geological Survey’s offices near San Francisco, and he continues to study the 1964 quake. He’s sharp as a tack. One of the great joys of writing this book was the opportunity I had to spend time with George and his partner, Doris. Over hours of conversation in California and Alaska, I got an incredible education in geology and seismology from a master teacher.

PRH:Plafker’s work in large part led to the science community’s eventual acceptance of the theory of plate tectonics. Why is that such a big deal?

HF: Most people don’t realize it, since plate tectonics is now universally accepted, but in the mid-1960s the theory was the subject of much debate. Many scientists were skeptical of the idea that the surface of the earth moved around in large pieces, or plates. Some were downright hostile. But through the work of many great scientists, including Plafker, the theory became accepted.

Like the theory of evolution, plate tectonics is important because it explains, relatively simply, a huge amount of what we see in the world. In the case of evolution, that is the physical appearance and behavior of organisms. Plate tectonics explains the features we see around us – mountains, volcanoes, island systems, rift valleys and many other things. It also explains the earth’s “behavior” – the earthquakes that rattle our world.

PRH:You spent two months in Alaska to see firsthand the lasting impact the quake had on the land. How is that in evidence today?

HF: There’s still plenty of evidence of the quake’s power. There’s a whole section of Anchorage near the airport that is now a park – the land was too tortured and unsafe to rebuild upon. You can walk through it and get some sense of how the land shook and slid. Elsewhere, around Prince William Sound, there is still ample evidence that the land rose up or subsided – docks that are far too high above the water, dead trees on land that sunk so much the tide inundated them. And if you’re lucky enough to get to Montague Island, as I did, you can stand on a former beach that is now more than thirty feet above the water, the land having risen that much in just a few minutes during the quake.

PRH: What is the likelihood that a quake this big, or bigger, could happen again in the United States?

HF: A quake of similar power is inevitable, either in Alaska or the Pacific Northwest. Stresses are building up in the zones where tectonic plates are colliding; someday those stresses will be great enough to overcome friction, and the plates will slip.

Through his work, George Plafker thinks that Alaska is largely safe for now – a big megathrust quake like the 1964 event isn’t likely for hundreds of years. (Though Alaska will continue to have many lesser quakes, some of which will be damaging.) In the Pacific Northwest the outlook is more concerning. Many scientists think the region is overdue for a destructive quake.