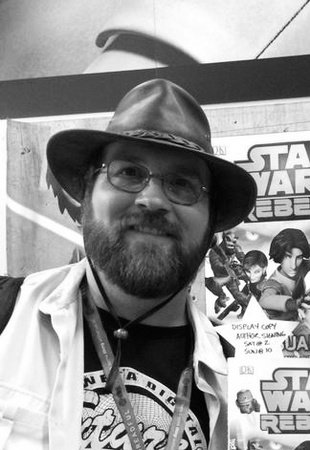 Adam Bray is a frequent contributor to DK Star Wars™ and Marvel books, including Ultimate Marvel and Marvel: Absolutely Everything You Need to Know. Visit him online at https://twitter.com/authoradambray.

Star Wars: Absolutely Everything You Need to Know, Updated and Expanded

What did it take for Adam Bray to co-write DK’s Ultimate Marvel? A stint as a freelance travel writer, music composer, and a gig working with chimpanzees. Oh, and a love of comic books … and writing research papers. We spoke with Bray about his rather eclectic career at New York Comic Con 2017.

Adam Bray: I started out as a travel writer. I worked on about 40 guidebooks for Southeast Asia, Vietnam, Cambodia, and Laos. I also freelanced for CNN, National Geographic, BBC, a lot of airline magazines and stuff just writing about adventure travel. I hopped on over and started writing Star Wars and Marvel books for DK . Between the two franchises, I’ve got, I think, 13 or 14 books now. They’ve kept me busy.

PRH: You’re a musician, too, right?

AB: Yes, I’ve done that, too. I compose music in my free time, and I have a really old CD that’s on iTunes. Hopefully, I’ll be putting tracks out here and there on my social media soon. So yes, I’ve got my fingers in all kinds of things. I used to work with chimpanzees, too. That’s kind of a strange, random thing in there.

PRH: With projects like the Star Wars and Marvel books, I imagine that it helps to be able to absorb and organize a lot of information quickly. How did you learn to do this?

AB: It’s funny: writing books like these reference books is like writing college term papers for the rest of your life. It’s a funny thing: I was a biology major in college, but I had to take english classes as part of the core, and I usually did better in those classes than the english majors did. I found that I enjoyed writing papers in school. No matter what the subject was, I did really well. I think it was a combination of natural interest and a little bit of natural talent.

PRH: Ultimate Marvel is kind of an important book. Marvel properties make up a good percentage of the movies that we go out and see at the theater. They’re on television and digital networks, as well. Were you always a Marvel fan or were you just as new to this as some of our readers?

AB: I’ve been a Marvel fan, but until the movies came out — the new formulated Marvel cinematic universes — I was more of a casual fan. I grew up with Spider-man cartoons and “The Incredible Hulk” TV show, so it has always been a part of my fandom in some way, but the MCU really kicked it in.

PRH: What if I don’t know much about the world of Marvel, or just know about it through the movies? Should I be intimidated by the Ultimate Marvel book, or is this something I can pick up and get into?

AB: I think that it can be intimidating, especially going into a comic book store and seeing all of these series and realizing how many decades they have been going on, but I think that if you’re familiar with the movies then that’s a great way into it. They cover the most important characters in the franchise, and that’s ideal. Spider-man, Iron Man, Captain America, Hulk, Thor — those are the big ones. This new book covers the characters, the locations, technology, vehicles, and it’s all in chronological order as they were introduced in the comic book. It’s a great way to learn about them.

PRH: Can I use Ultimate Marvel as a stepping stone to get a little more into the mythology than I was before?

AB: Yes, definitely. You can get this book, and could even get the previous Marvel book I did, Marvel: Absolutely Everything You Need to Know. It is kind of more of a trivia book that covers the obscure facts, but also the fundamentals. If you have those then they give two ways of exploring the Marvel Universe