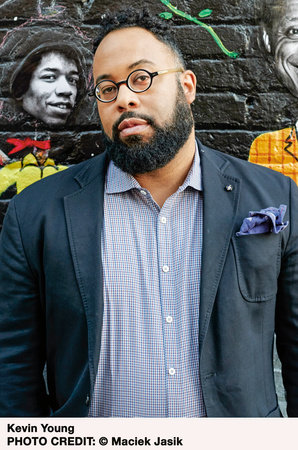 KEVIN YOUNG is the Andrew W. Mellon Director of the Smithsonian’s National Museum of African American History and Culture. He previously served as the director of the Schomburg Center for Research in Black Culture. Young is the author of fourteen books of poetry and prose, including Brown; Blue Laws: Selected & Uncollected Poems 1995-2015, long-listed for the National Book Award; Book of Hours, winner of the Lenore Marshall Poetry Prize from the Academy of American Poets; Jelly Roll: a blues, a finalist for both the National Book Award and the Los Angeles Times Book Prize for Poetry; Bunk, a New York Times Notable Book, long-listed for the National Book Award and named on many “best of” lists for 2017; and The Grey Album, winner of the Graywolf Press Nonfiction Prize and the PEN Open Book Award, a New York Times Notable Book, and a finalist for the National Book Critics Circle Award for criticism. The poetry editor of The New Yorker, Young is the editor of nine other volumes, most recently the acclaimed anthology African American Poetry: 250 Years of Struggle & Song. He is a member of the American Academy of Arts and Sciences, the American Academy of Arts and Letters, and was named a Chancellor of the Academy of American Poets in 2020.

Emile and the Field