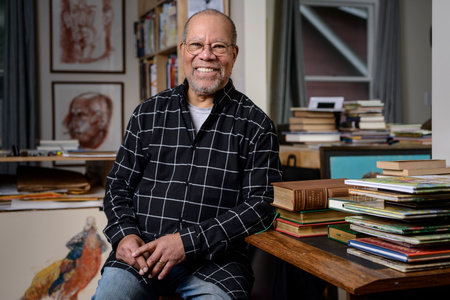 Jerry Pinkney is one of America’s most admired children’s book illustrators. He has won the Caldecott Medal and five Caldecott Honors, five Coretta Scott King Awards, five New York Times Ten Best Illustrated Awards, the Coretta Scott King-Virginia Hamilton Award for Lifetime Achievement, the Laura Ingalls Wilder Award, and the Society of Illustrators’ Original Art Show Lifetime Achievement Award, and many other prizes and honors. Recently a member of the National Council of the Arts and inducted into the American Academy of Arts and Sciences, he has also served on the U.S. Postal Service Citizens’ Stamp Advisory Committee. His artwork has been exhibited in galleries and museums throughout the country, including the Art Institute of Chicago, the Philadelphia Museum of Art, the Schomburg Center, and the Norman Rockwell Museum. Jerry Pinkney lives with his wife, author Gloria Jean Pinkney, in Westchester County, New York.

A Place to Land