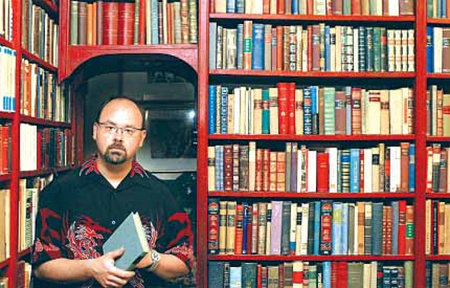 Carlos Ruiz Zafon was one of the world’s most read and best-loved writers. His work has been translated into more than forty languages and published around the world, garnering numerous international prizes and reaching millions of readers. He died in 2020.

The Shadow of the Wind takes place in the atmospheric, and very palpable, setting of Barcelona—and in fact, this city becomes one of the novel’s more prominent characters. Why did you choose to locate your story here?

Barcelona is a complex virtual world of Dickensian lights and shadows, beautiful and mysterious. I wanted to bring its history, its soul, alive in this story in a very cinematic, sensorial way. A poet once called Barcelona “the great enchantress.” I was born, raised, and have lived most of my life here and wanted to use my hometown not merely as a backdrop, but as an organic character—to convey its romantic and seductive, yet sometimes dark and dangerous allure.

You chose post-Spanish civil war Barcelona rather than the contemporary city. Why is that?

The first half of the 20th century was a time of tremendous dramatic and historic significance, not just for Barcelona or Spain, but the entire world. I wanted to use this rich, complex historical canvas to explore themes and issues that are as, or even more, relevant today than they were then.

You’re a screenwriter as well as a novelist. How has that influenced your fiction?

Writing screenplays forces you to consider elements of story structure, and a variety of narrative devices, that can be adapted to the more complex demands of a novel. I believe the modern novel should try to capture the scope and ambition of the 19th century classics while making use of the narrative tools the 20th century has left us, from the avant-garde to the images and sounds of the golden screen.

I also think that this book, being a novel of novels and a book within a book, has the reader bring his own literary and cultural references—from classic Greek tragedy to genre fiction to the classics to the language and images of modern advertising or film—and project them into the story. All of these things come together within the texture of the novel and, I hope, will allow each reader discover something of himself in the stories within stories—their hopes and fears, their own humanity mirrored. I think the reader will enjoy the ride, the images, the language, the humor, the suspense, the sense of adventure, and above all the thrill of pure storytelling.

Where did the ideas for The Cemetery of Forgotten Books come from?

This formidable labyrinth of books was the first image that came to my mind for this novel, the first brick in the building. It’s a metaphor of all the vital and important things, ideas, and people we tend to forget or neglect in favor of the banal, empty, and often self-destructive elements in our lives.

Why books? I’m a voracious reader, and I like to explore all sorts of writing without paying attention to labels, conventions, or critical fads. I learn a little from everything I read, from genre fiction to the classics, though if I had to choose a particular pantheon I’d say the great 19th century giants have yet to be beat or even remotely approached. Dickens, Tolstoy, Dostoyevsky, Balzac, Hugo, Hardy, Dumas, Flaubert & Co. Dream Team indeed. The Shadow of the Wind uses elements of the mystery novel, the historical thriller, the grammar of film and image storytelling, metafiction, romance saga, gothic literature, the comedy of manners, and many other narrative devices to create a new genre that goes beyond the sum of its parts. My aim was to allow the reader to experience this world and these characters in a sensory, cinematic, tactile way.

This book has become quite an international phenomenon—still at the top of Spain’s bestseller list, where it was first published in Spanish, and #1 in Germany. Clearly it crosses cultural and national boundaries. Who do you see as the ideal reader for this novel?

I hope this is reading for those who love, really love, to read. I drew on the Dickensian model of creating a complex world populated by intriguing places, peculiar creatures, and infinite details at work. A good novel begins with a universe that should feel to the reader as real and fascinating, if not more so, than the one he inhabited before he picked up the book. This is a novel for those who love to lose themselves in that kind of universe.

Every translation needs some fine-tuning to adapt certain aspects of the context and double meanings. However, I tend to think readers, and lovers of books in general, have a secret nation of their own, and their understanding and intellectual curiosity goes beyond languages, passports, or even the fine points of slightly different cultural and historical contexts.

What do you hope readers of The Shadow of the Wind will take away from your book? I think novels should be an experience. I want my readers to be thrilled, to be moved, to laugh, to cry, and to be terrified. To be stimulated. I want them to have the time of their lives and at the same time to look at the world, and themselves, in a different light. Many readers have told me that The Shadow of the Wind made them fall in love again with books and reading. If my book accomplishes that, I’ll be more than happy.

What can we hope to see from you next?

I’m working on a new novel that picks up the mix of genres and techniques of The Shadow of the Wind and tries to take it to the next level. It is the second in a cycle of four books that I’ve planned in this “gothic Barcelona quartet,” a sort of narrative kaleidoscope of Victorian sagas, intrigue, romance, comedy, mystery and “newly” fashioned old fashioned good storytelling.