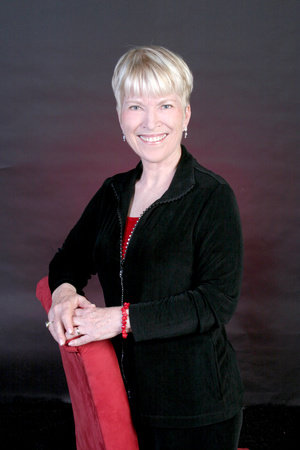 A romance-writing career has brought Vicki Lewis Thompson many wonderful things: New York Times bestseller status, the Nora Roberts Lifetime Achievement Award from Romance Writers of America, thousands of readers, many dear friends, and the cutest little yellow convertible in the world. Although she’s written more than a hundred books, she continues to be fascinated by the many ways that a man and a woman fall in love. The age-old story remains a challenging puzzle to be solved anew with each book.

Wild About the Wrangler

Crazy for the Cowboy

Tempted By a Cowboy (Novella)

Interview With A Werewolf

Colin MacDowell, the Most Honoured Laird of Glenbarra, is a busy Were, so Werewolf Weekly was extremely fortunate that he agreed to a rare interview during a layover in Chicago’s O’Hare Airport. MacDowell has inherited a property in the Pacific Northwest, which prompted his trip across the Atlantic.

WW: As a titled Scotsman and leader of the MacDowell pack, how would you prefer to be addressed?

CM: I’m not a fan of stuffy forms of address. Colin will do. May I ask why you’re smiling?

WW: It’s the accent. I’ve never heard a Scottish Were speak before. I’m having a Sean Connery moment, although of course he’s not a werewolf.

CM: Not that I’ve heard.

WW: And surely we would have heard. We protect our own.

CM: Aye. Because we must.

WW: Is the image of werewolves as unflattering in Scotland as it is here?

CM: Worse, I’m afraid. Scotland is filled with crumbling castles and windswept moors. You can only imagine how that feeds fear and superstition. Mention the word werewolf and the humans shudder and cross themselves.

WW: So they still believe that we are out to attack and kill them?

CM: Apparently they think that, which makes no sense. We’d have no motive. Our investments have made us prosperous and we welcome humans as business partners, although they have no idea who they’re dealing with. Why would we kill them when they help us make money?

WW: Don’t they also think we want to bite them and turn them into werewolves?

WW: That brings up a subject occupying the thoughts of many Weres these days. I assume you’ve heard about the Wallace brothers taking human mates?

WW: Care to comment on the issue of Weres mating with humans?

CM: Their actions risk the safety of all werewolves. What if their mates reveal our secret, either intentionally or by accident? We were nearly exterminated centuries ago, and we’ve recovered from that, but weapons are more sophisticated now. Allowing any human to know we exist is dangerous and foolish.

WW: I understand your younger brother Duncan does not share your views.

CM: No, he does not. He seems determined to take a human mate, regardless of the inherent problems.

WW: I suppose it’s a good guess that you won’t be doing the same.

CM: The day I take a human mate will be the day all Scotsmen give up drinking whiskey and quoting Robbie Burns.

CM: Precisely. Now if you’ll excuse me, I have a plane to catch.

WW: Certainly. Werewolf Weekly is grateful for the opportunity to hear another side of this breaking story. Change is in the air, and as this interview demonstrates, not all Weres welcome it.