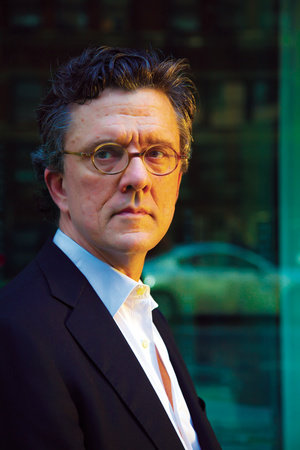 Kurt Andersen is the bestselling author of Evil Geniuses, Fantasyland and the novels True Believers, Heyday andTurn of the Century, among other books. He contributes to The New York Times and was host and co-creator of Studio 360, the Peabody Award–winning public radio show and podcast. He also writes for television, film, and the stage. Andersen co-founded Spy magazine, served as editor in chief of New York, and was a cultural columnist and design critic for Time, New York and The New Yorker. He graduated from Harvard College and lives in Brooklyn.

You Can’t Spell America Without Me

Kurt Andersen turned in the manuscript of his latest book, Fantasyland, in spring of 2016, just as Donald Trump was winning the nomination for the Republican presidential candidate. Andersen is no fan of Trump’s, but he couldn’t help appreciate how the former TV celebrity’s ascension to the highest office of power in the country confirmed the thesis of his book. In Fantasyland, Andersen traces what he describes as a national allergy to verifiable fact back to our Founding Fathers, and before. From the Salem witch trials to the psychedelic Sixties, America has been a country deeply in love with the unreal, Andersen writes, and our current administration is simply the natural result of centuries of magical thinking. He spoke to Penguin Random House about his book, and why we are all citizens of Fantasyland.

PENGUIN RANDOM HOUSE: I’d love if you could talk a bit about the genesis of the book: an excerpt in The Atlantic focuses on the end of the book, where you discuss the 1960s and their aftermath as the point where America fundamentally broke from an agreed upon definition of reality. Did your interest in the book start with a desire to investigate this period more fully, and then extend backwards, or did you become convinced that the Sixties were so pivotal as you wrote about the preceding centuries?

KURT ANDERSEN: The book had several sources that bubbled and mixed and fermented for a long time. I started thinking about and figuring out the 1960s threads in the course of writing my last novel, True Believers, which is partly set among young people in the ’60s. And my first novel, Turn of the Century, back in 1999, about a couple who are in the TV and gaming businesses, got me thinking hard about the strange new American hybrids of reality and entertainment. Around the same time I wrote an article for The New Yorker called “The Entertainer-in-Chief” about Bill Clinton and how presidential politics had become a show business genre. I saw the changes in the GOP up close when my lifelong-Republican mom definitively left the party around 2000. And in 2005 I wrote a New York article about a federal trial over teaching creationism in Pennsylvania public schools.

PRH: I imagine the book took you several years to complete. You write “the fact that Fantasyland candidates were the consistent front-runners for the Republican nomination was surprising and appalling but also a little gratifying too – empirical proof of my theory as it applies to politics.” How did the election, and the way it evolved over the period when you were writing, influence your thesis?

KA: I started work in 2013. I spent about a year researching, two years writing, another year revising and cutting. I delivered the manuscript in the spring of 2016 – in other words, just as a guy who uncannily embodied almost every thread of my history and theory was winning the Republican nomination for president. The outcome of the election didn’t affect the book much – although the surprise and shock of having Donald Trump as president obviously makes Fantasyland more interesting to more readers now. It’s kind of like Albert Einstein finishing his theory of relativity in 1916, then having it fortuitously confirmed almost immediately by a total solar eclipse.

PRH: How would this be a different book were Hillary Clinton president today?

KA: It would be read differently, but the book really wouldn’t be much different – I guess I probably would’ve had fewer than 12 pages about Trump in the last chapter. Only 100,000 votes tipped the election, less than one-tenth of one percent; if they’d gone the other way, my conclusions would’ve remained my conclusions.

PRH: You trace religious movements and the way they’ve shaped the American identity beginning with the Protestant Reformation, and draw parallels between the Great Awakenings of the 1700s and 1800s and what Tom Wolfe called the Third Great Awakening in the 1960s. Do you see a fundamental difference between the religious-inspired frenzies of the early movements and the essentially narcissistic, self-flattery of the third awakening, which Wolfe also called the Me Decade?

KA: No, I don’t. The most brilliant part of Wolfe’s 1976 essay, a part mostly neglected, wasn’t about the silly yuppie vanities of the Me Decade but about the post-60s proliferation and scaling of wild and crazy Protestant religion and of quasi-religious belief in the paranormal and extraterrestrials.

PRH: Throughout the book, you write about what you describe as the uniquely American twin passions for money and for God. We have a president who has given conflicting statements about his own faith but who, for some Americans, embodies wealth beyond imagination (despite the fact that many of his actual businesses have failed.) Does his presidency signify that money is now more important than faith?

KA: He is a president who pretends to be much richer and more religious than he is. His election was a validation of the American obsession with celebrity more than money. If his presidency signals anything, it’s that Americans find entertaining fantasies and lies much more compelling than facts and truths.

PRH: You end your book calling on fellow rationalists to fight Fantasylanders both in private and in public, and you write, “the good news is that America may now be at peak Fantasyland. We can hope.” After spending so many pages delineating the several centuries of delusion and hype that has gotten us to where we are today, how optimistic are you really about our ability to reshape our national character?

KA: By definition, national character can’t much be reshaped – but we can control its problematic excesses, as we did pretty effectively for a couple of centuries. And because I’m not a total rationalist, my fingers are crossed that we will.