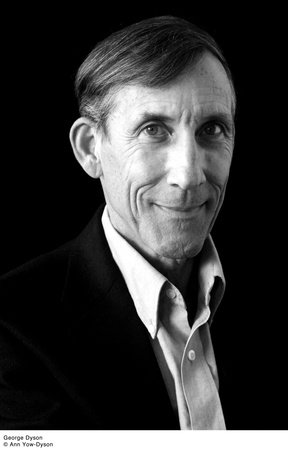 George Dyson is a science historian as well as a boat designer and builder. He is also the author of Baidarka, Project Orion, and Darwin Among the Machines.

PENGUIN RANDOM HOUSE: Tell us about Turing’s Cathedral, your most recent book.

George Dyson: It took me ten years to write it, and it was long overdue. The subtitle is The Origins of the Digital Universe. We are all living in this digital world — you’ve got your digital recorder there probably filling up 32,000 bits per second from our conversation — but we don’t really have a common creation myth of how this all began. And it goes back to a single point. With biological life we don’t really know where life started, but with the digital universe there’s a point at which it didn’t exist and then a point when it did exist. I went to find this out, and of course, it’s a very interesting story. Half the work is doing your research, but the other half, the harder part, is making it into a story people can read.

PRH: With a ten-year span of creating this story, the digital world has changed quite a bit. Did this rapid evolution change the way that you had conceived of this book in the beginning?

Dyson: No, I think that this is one of the good things about studying history: If you’re writing about the beginning of the digital world you can take ten years to develop the story and the origins are still there. Whereas if you set out to write a book about Google and you take two years to write it, it will be out of date.

PRH: What does the title refer to, exactly, and why is this a good point to start?

Dyson: Alan Turing was this very bright young student who, at twenty-four, published a paper that remains absolutely the most important thing that has ever been written about the way computers — computers that weren’t even invented yet — work, and he did it out of thin air. He also became very interested in the question of artificial intelligence, and he thought about that long before other people. He made a statement in 1950 to answer the critics who said that he was trying to play God by creating intelligent computers. He said no, just as with human reproduction, we are not creating souls, we are creating the mansions for the souls that only God can create. I’d had that thought in the back of my mind for a long time, and when I went to visit Google in 2005 I saw that Google really is doing this, they’re building a true artificial intelligence and doing everything Turing ever dreamed of. I thought about Turing’s mansion: his mansions for souls, and this wasn’t a mansion, it was a cathedral. The phrase stuck and became the title for the book.

PRH: Casual readers may know about Turing, but might not know the extent of his work. Is your book something that the layperson can pick up and read?

Dyson: I don’t think that it takes a technical background. The reason to start at the beginning is that when Turing had to explain his ideas no one then knew what a computer was, and he had to explain it very clearly. Most of the book is non-technical. It’s the human story of who did what and when and the relationships between these very interesting people. Like many people who become known for one idea, Turing was misunderstood. In the same way that Darwin was not really a Darwinist, we think of Turing as having invented this very deterministic form of computation but he actually spent a lot of his life thinking about non-deterministic computation. And that’s the future that still awaits.

Want more? Check out a few additional questions with Turing on Suvudu.com.