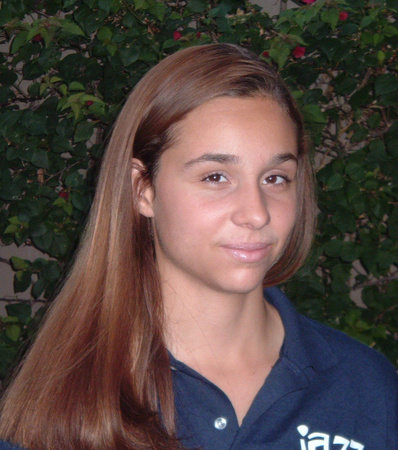 "There is no five-step process for writing a book. It seemed to me then, that if I was going to become a writer, I was going to have to teach myself."–Kelly McWilliams

Kelly McWilliams loves music, studies Aikido, plays jazz and classical piano, and published her first book, Doormat, at the age of fifteen. She lives in Arizona, where she shares a room with her semi-tame cat, Griffin.

I grew up in Scottsdale, Arizona, where I went to middle school at Phoenix Country Day School. I read constantly but it was in junior high school that I started experimenting with my own writing. I was thrilled by the discovery that I could write a decent short story if I put my mind to it, but more important to me than my writing was still my reading, and my daydreaming, which is just as important.

My mother is the author Jewell Parker Rhodes, and she has been writing and publishing since before I was born. It was by watching her work that I first became interested in becoming a writer for life. It was amazing to me that my mom could produce something as perfect and wonderful as a book with her name on it after spending countless but (as it seemed to me then) easy hours in her room on her computer. I was learning expository writing in junior high school at that time. The five-point essay. The persuasive paragraph. I studied all these things as they were introduced to me, hoping to become a better writer, but eventually I noticed that no one was offering up a formula for a novel. There is no five-step process for writing a book. It seemed to me then that if I was going to become a writer, I was going to have to teach myself. I wanted to write a novel, but my biggest question was, could I?

In eighth grade I invented some characters, the characters featured in Doormat, that I found interesting enough to write about. But I was too afraid to start writing about them until the summertime, which was the summer before my freshmen year of high school, when all my friends were out of town and the weather was hot enough to keep me indoors for a while. I wrote a couple of pages each day, and then one day realized that I had enough pages to call it a novel.

When I look back on Doormat now, a novel primarily about teenage relationships, I’m also looking back on my middle school years and my own relationships. Though the book is far from autobiographical, I like to think I got the feelings right because I experienced something like them too.

I’ve done a lot of reading in sixteen years, and a good chunk of it has been in young adult fiction. I think it’s important for kids to grow up and make decisions along with a set of great characters. By the time those kids are teenagers, the characters have grown too, if not in actual age, then in the way we see them.