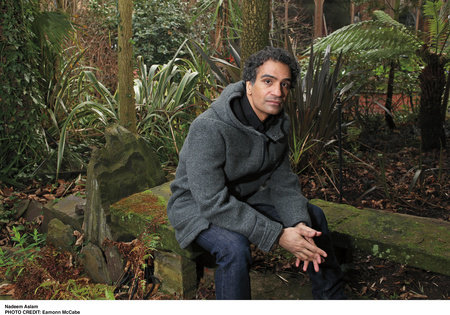 Nadeem Aslam was born in Pakistan and now lives in England. He is the author of four previous novels, most recently The Blind Man’s Garden. His work has been long-listed for the Man Booker Prize, short-listed for the International IMPAC Dublin Literary Award and the DSC Prize for South Asian Literature, and has won the Kiriyama Pacific Rim Book Prize, the Encore Award, the Windham-Campbell Prize, and the Lannan Literary Fellowship for Fiction. He is a fellow of the Royal Society of Literature.

PENGUIN RANDOM HOUSE: What inspired you to write The Blind Man’s Garden?

NADEEM ASLAM: We have lived through an extraordinary decade, beginning with 9/11 and ending with the Arab Spring – and between that we have the war on terror, the call to jihad, the invasion of Iraq and Afghanistan, Abu Ghraib, Guantanamo Bay, the murder of Benazir Bhutto, the killing of Osama bin Laden. A clash seems to have occurred between an incomplete understanding of the East and an incomplete understanding of the West. Not long ago on Google, I typed in the words ‘Pakistan is’ and the four autofill choices I was given were: Evil, Stupid, Dangerous, A terrorist country. I typed in ‘America is’ and the choices given were: Not the World, Evil, Not a country but a business. So when I began writing The Blind Man’s Garden I wanted to find a story that could hold as many of these elements as possible, without losing shape as fiction. A novelist doesn’t tell you what to think, he tells you what to think about.

PRH: You were born in Pakistan and moved to England at the age of fourteen. How did your experience inform your writing?

NA: I am grateful for my knowledge of Urdu, Pakistan’s national language. I don’t just have the twenty-six letters of English – I have the thirty-eight letters of Urdu too. My alphabet is bigger. Readers often speak of the melancholy lyricism of my books and wonder about the influence of Urdu poetry. But I don’t sit down to write in any particular way. It’s not as though one writes a non-lyrical page and then decides to add twenty grams of lyricism to it, or thirty ounces of political thought and five drops of emotional intensity. Language is a deeply private thing – it comes as it comes. I get as much pleasure from looking at an apple as from eating it, so my books are visual. One of the things I remember about The Divine Comedy is that Beatrice has emerald eyes. This is my sensibility. One must not examine these things too much. John Banville said about Nabokov that he did not write in English: “He wrote in a private secret language that was mysteriously comprehensible to English-speaking readers.” That I think is true to all writers to an extent.

PRH: Tell us about your writing process.

NA: I often write in isolation, avoiding all contact for weeks and months, and even blacking out my windows. It is a habit I developed when I was younger and had no money. In order to make the best use of the time I had, I wished to eradicate distractions as much as possible. I was quite a dreamy adolescent and I think part of it still survives – I can get lost in the movements of an insect or watch the falling rain. So I would black out the windows and stay in and write. Once I was writing an episode set in summer in Maps for Lost Lovers – I went out into the garden for the first time in about a week and couldn’t understand why it was snowing, how it could be cold.