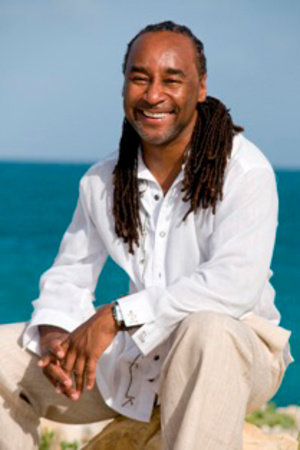 Eric Jerome Dickey (1961-2021) was the award-winning and New York Times bestselling author of 29 novels, as well as a six-issue miniseries of graphic novels featuring Storm (X-Men) and the Black Panther. His novel Sister, Sister was honored as one of Essence’s “50 Most Impactful Black Books Of The Last 50 Years”, and A Wanted Woman won the NAACP Image Award in the category of Outstanding Literary Work in 2014. His most recent novels include The Blackbirds, Finding Gideon, Bad Men and Wicked Women, Before We Were Wicked, The Business of Lovers, and The Son of Mr. Suleman.

The Son of Mr. Suleman

The Business of Lovers

Before We Were Wicked

Eric Jerome Dickey’s oeuvre comprises far more than his twenty-plus New York Times bestselling novels. He began his professional life as an engineer in Los Angeles, and quickly found that his thirst for the arts would be better quenched elsewhere. Since switching careers, he has written screenplays, poetry, short stories, comic books, and, of course, novels. With the paperback release of his novel One Night, and the forthcoming April 19 release of The Blackbirds upon us, we caught up with Eric Jerome Dickey over email to chat about his prolific writing style, his inspirations, and the wide variety of mediums to which he finds himself drawn.

PENGUIN RANDOM HOUSE: Since 1996, you have authored two dozen novels. Given your prolific style, I must ask: How do you keep the ideas flowing? Is it about seeking out inspiration, or does the story seem to find its way to you?

ERIC JEROME DICKEY: There is no magic, not for me. It’s simply getting up and going to work. You have to have dedication, desire, and discipline to make it happen, as it is with all occupations. You have to get your 10,000 hours in. I have to put my butt in a chair and be proactive, not wait to be inspired. Waiting for inspiration could be like waiting for Godot. (I always said, if people went to work only when inspired, that would be on payday, and inspiration would last as long as it took to pick up a check.) It’s work. You can do it in your PJs, or at Starbucks, but it’s work. You sit, develop, edit, modify, mold, repeat. At least that’s what I do. For me, the key is showing up to work. On sunny days when it would be so easy to throw a Frisbee from dawn to dusk, or on a rainy day that would be perfect to binge watch your favorite shows, I still have to put on my adult hat, sit, and work.

PRH: Do you or have you tapped in to your personal life when penning a novel? Are there certain personal experiences that are off limits for literary interpretation?

EJD: I avoid my life. It bores me. Trust me. A book about me would be a snoozefest. There will be no reality shows about watching writers write. That would air right after “Watching Paint Dry as Grass Grows.” I try to keep me out of it, and I keep my friends out of it to avoid lawsuits. I prefer to create a character, or a cast of characters, and break each one down — hit man, engineer, or college student, male or female, see what motivates him or her, discover what they want, what they fear, and create the antagonists and obstacles. It’s all make-believe. At least it is for me.

EJD: Pretty much everyone in some way. Novelists, screenwriters, TV writers, song writers with songs that tell stories, comics. No one writer is the greatest influence, but the collective has range. From Stephen King to  Maya Angelou to Ed Brubaker to Stan Lee to Hugh Prather to Stieg Larsson to Walter Mosley, Baldwin to Nabokov to Koontz. And Hitchcock. I used to download his screenplays and study the script as I watched his films. I was more interested in the words on the page and what the writer had created than the actor and his or her stellar performance.

PRH: You also write comic books for Marvel. Let’s talk about the intersection of comics and urban fiction — do they in fact intersect in your mind? Or are they two completely separate avenues?

EJD: They are two different mediums. Distant cousins who grew up in different parts of the world, maybe different countries. No intersection. Now, I cringed when I read this question. What’s urban fiction? I have never been clear on that. I’ve written suspense, romance, erotica, characters who live in mansions, and some who live in other parts of the world. Some have been set in small towns, and many in the suburbs. My novels have covered a lot of terrain in many parts of a city. So … urban fiction … I remember seeing that label on “Sex and the City” when it first appeared; then it popped up on novels by African Americans … and vanished from mainstream novels. If I write a story that takes place in a small town in Alabama, and it’s called urban fiction, it’s a misnomer. Same for a tale in Phillips Ranch, California, an hour away from the city of L.A., out in no man’s land. Feels like a euphemism that is more about race than genre. So  … inform me. Again, I ask because urban does not mean African American, and African American is not a genre (even though in some stores they tend to throw novels by U.S. writers with melanin into the same bin. I don’t think I’ve ever seen a UK or African writer in that bin). And, in my humble opinion, White is not a genre. Suburbia is not exclusively White. Mystery, Suspense, Romance, Erotica, Dystopian, YA … genres. Urban fiction? Not clear; not that one. So I’m just checking. All of these genres can take place in an urban setting, urban simply meaning a large city, metropolitan area. I need a bit of clarification. Are they literary profiling? When I was in engineering, I was never called an Urban Programmer.

PRH: You’ve dabbled in screenwriting. Do you have any desire to make a return to that world?

EJD: Yeah, at the start I thought I would move in that direction, but writing and seeking acceptance from Hollywood, not my thing. You show up with a script featuring an African American cast, back then it was pretty much a no-go out of the box. That aside, a screenplay requires a budget. So, if I have an adventure that moves around the world, car chases, a fancy smancy wardrobe, it could be an issue. In a novel, there are no such restrictions. A novel costs the same if the character trots the globe as an assassin, or if the bulk of the story takes place in one upscale hotel room on a rainy night. I might give the screenplay thing another shot, after I am reeducated and reacclimatized to the process. I’ve been chatting with a few friends regarding trying to get a project going. Just depends more on time than interest.

PRH: You came to writing in a roundabout way, graduating with a degree in Computer System Technology. Knowing what you do now, if a young person were to come to you for advice about making a sharp shift in life to literature, what would your advice be?

EJD: Do it for the love. And, again, writing is an occupation. Like engineering, or becoming a nurse, or being a serious actor, or a singer, you have to do the work in order to stand out from the ones in search of fifteen minutes of fame. For your favorite writers, research where they studied, how they studied, and maybe which books on writing they have studied along the way. Writers Digest has a great series. Stephen King’s On Writing is amazing. Many want to come this way because they think it’s easy money, think that creating a novel is an idiot’s occupation, or they simply want their name on the cover of a novel and assume the world will show up and praise them when its released. They want a literary wedding. It doesn’t usually work that way, at least not for me.

I stress that writing is a job, and you need to understand the craft. Even when it’s all done properly, many end up with boxes of unsold novels sitting in their garages. (Side note: After writing comes marketing and sales, and that is where the rubber hits the road for most. Many have changed from being introverts to being very outgoing. You have to sell. People would probably have a better idea of what the transition is like if they looked at writing as the creative part; everything after is starting a business.) You have to show up to work. I can’t say that enough. Good days, bad days, you have to show up. And no one will be there to drag you and make you sit in front of your computer. And don’t just read the works of others, but get down to the nitty gritty, invest time, and study the craft. Understand the style of others; understand why some novels worked and others tanked, and then find your own voice, your own style.  Give it your energy. Learn the rules, then find a way to break ‘em.

PRH: If you could pick one deceased author who would be resurrected to write just one more book, who would that author be and why?

EJD: Today, at this moment, since his novel is staring at me from my desk, I will say Stieg Larsson. I would love another installment featuring the characters from The Girl with the Dragon Tattoo. (A new novel has been added to the series using another writer, and, no disrespect, because I will read that one soon, but it would be great to have one more penned by Stieg, his hand, his voice.) I would also love another from Ed McBain. I really enjoy both. Two different styles, one verbose, one terse, both excellent. But if you ask me tomorrow, you might get different names.