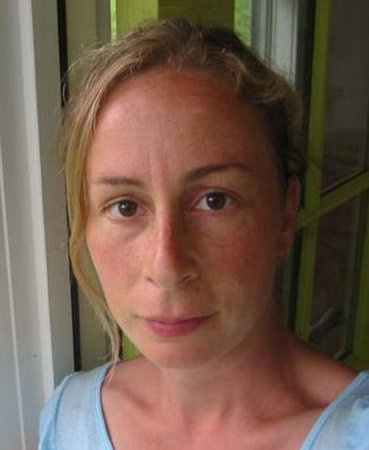 Giselle Potter has illustrated numerous books for children, including Cecil the Pet Glacier by Matthea Harvey, Want to Be in a Band? by Suzzy Roche, and The Boy Who Loved Words by Roni Schotter, which was a Parents’ Choice Gold Award winner. Giselle lives in New York’s Hudson Valley with her husband and daughters. Visit her at GisellePotter.com.

This Is My Dollhouse

Tell Me What to Dream About

“I drew a lot as a kid because that is what everyone around me did. Everyone in my family was an artist and they all included me in their art. Both my grandparents were painters and my grandfather always invited me (and everyone who visited his studio) to add to his paintings. My dad made sculptures with found metal in the garage next to our house and the best way to talk to him was to think of something to make in his garage with him.

My parents had a puppet theater company called The Mystic Paper Beasts, with large papier-mâché masks and puppets. Some of their shows were stories like The Emperors Nightingale, the story of Queen Isabella of Portugal, the life of Toulouse-Lautrec, or one about the circus called Manimal Zoo. Until we were teenagers my sister, Chloe, and I performed and traveled with them, mostly doing street theater in the piazzas of Europe. My mom helped me a keep all my pictures, stories, and tokens from our travels glued into a journal that I still use for inspiration now. When missing school became more disruptive for me and my interest in being a normal teenager grew, I quit.

After high school I went to Indonesia by myself and studied Balinese miniature paintings. I realized painting is what I’m happiest doing and I could actually go to college where that’s all I would do. So I went to Rhode Island School of Design. I spent my last year of RISD in Rome where I painted lots of pictures of saints.

My first illustration job was a drawing for the New Yorker and soon after Chronicle Books published my book of saints, Lucy’s Eyes and Margaret’s Dragon. Anne Schwartz offered me my first children’s book Mr. Semolina-Semolinus, and I have illustrated over twenty since including The Year I Didn’t Go To School, about the experience of traveling in Europe with my parents’ puppet theater.

My latest endeavors with Anne Schwartz and Lee Wade are The Boy Who loved Words (Spring, 2006) and The Littlest Grape Stomper(Spring 2007). At the moment, I am working with them on a version of the 19th century poem Wynken, Blynken and Nod.

Now I live in the Hudson Valley with my husband, who is a furniture maker, and our two daughters Pia and Isabel, who are just discovering for themselves the endless joy of making pictures.” –Giselle Potter, 2007