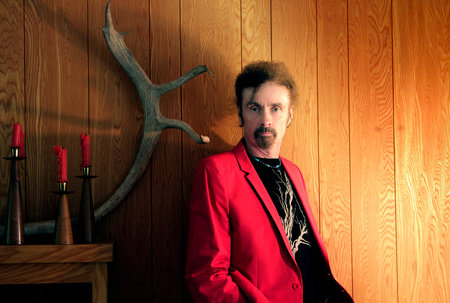 T. C. Boyle is the author of more than ten novels, including World’s End (winner of the PEN/Faulkner Award), Drop City (a New York Times bestseller and finalist for the National Book Award), and The Inner Circle. His story collections include Tooth and Claw as well as The Human Fly and Other Stories.

Sign me up for news about T.C. Boyle and more from Penguin Random House

Talk Talk is your first foray into thriller fiction. What attracted you to the genre? Do you have any plans on returning to it in the future?

I do not consider this “thriller fiction,” but rather just a thrilling read, like many of my stories and novels—the designation, I think, limits the reader’s expectations. Novels like Drop City and A Friend of the Earth are equally thrilling, as are many of my short stories, such as “Termination Dust” and “Killing Babies,” to name just a few. To my mind, the term “thriller” applies to books that focus on one level only—that of plot—while Talk Talk provides a rich subtext probing the question of what our identity is and how we know ourselves through language. It may be interesting to note that while most critics here saw The Tortilla Curtain as a socio-political novel, a number of critics in England called it a thriller. Amazing, no? It just goes to show you how limiting such designations can be.

If we are not mistaken, Talk Talk is your first novel since World’s End set substantially in Westchester County, New York. Was there a particular reason you chose to return to the region of your upbringing for this novel?

Many of the characters in my novels and short stories hail from Peterskill, the fictional town I’ve created as a stand in for Peekskill (on the Hudson), where I was born and raised. Peterskill remains at the heart of my fiction, no matter where the stories take me, and I find comfort in returning to it whenever I can. Peck Wilson, like Tyrone Tierwater of A Friend of the Earth—like me—is a stranger in a strange land out here on the West Coast. No matter how long I live in California or how closely I am identified with its society and landscape, I will always see it slightly askew—that is, from the perspective of an Easterner, born and bred. I like the tension this slight disassociation lends to my work.

What, exactly, is the American Dream and how do you prove it has come true (or failed) in your own life? I am a product of this dream, if you take it to mean that in a democracy such as ours social mobility is possible, that if you work hard enough and have the talent and education, you can succeed at what you put your mind to. All well and good. But for many—immigrants, especially, but also native-born Americans like Peck Wilson—the outward show of prosperity is all that matters. We are sold product from the day we are born till the day we die and the majority of ads imply that without one shining new thing or another we are somehow lesser people and woefully unfulfilled. It is easy to mistake the object for the reality. Dana’s dream, like Peck’s, is to be accepted in the larger society—or not simply accepted, but admired. And yet she goes about it in the old-fashioned way, working compulsively to overcome her difference and succeed on her own terms. Peck, with his narcissistic (sociopathic) personality, sees no reason to bother, when the fruit is there for the picking and the show is all.

The ending of Talk Talk clearly upsets the conventions of thriller fiction. Why did you choose to create, then frustrate, that desire for revenge that runs through the novel?

Well, of course, for one thing I do not adhere to convention—I want always to surprise myself and, by extension, my readers. I do think, however, that some readers, in the mad, page-turning rush of this novel—breathing hard, ignoring the telephone—might just miss the subtlety and appropriateness of the ending of the Dana/Peck story. If this is a book that explores what it is to identify oneself—through language, as Dana does in a different way from hearing people and that Victor, the wild child, is never able to do—then it may be significant to think about the fact that the ending builds to the only moment of verbal communication between the antagonists. What do you want? Yes, and you can almost hear the waters rushing into that gulf. How could anyone put it into words?

A question about the novel’s literary forebears. William Peck Wilson, the novel’s villain and double, is an allusion to Poe. Dana’s reciting of Poe’s “Annabel Lee” (the name of a character in Nabokov’s Lolita) then connects it to Lolita, another detective road novel, as it were, involving a doppelganger. Finally, Bridger Martin seems to reflect the eponymous hero of William Golding’s Pincher Martin, a character like Bridger with a skewed sense of reality. Could you talk briefly about these or any other literary works that influenced the writing of the novel?

Nice observation. Yes, I was, of course, referring to Poe’s doppelganger story and did have Nabokov’s Lolita in mind to a certain degree—not tonally, but rather for its playfulness (which will be reflected much more fully in my next novel) and the fact that it is a classic American road novel, as you’ve stated.

Your portrayal of Dana’s condition is very convincing. How much research did you conduct beforehand? Have you received any feedback from the deaf community about the book?

Once I discovered that Dana would be deaf, the whole book opened up for me in the way I’ve discussed above: we are our language and Dana’s language is very different from ours, a visuo-spatial language rather than an auditory one, and so she is more protective of her identity even than we might be. I had the great good fortune to be able to go to Gallaudet University in Washington, D.C., and meet with the students there while writing this book. I was also assisted by a friend who went deaf later in life and who has become an advocate of cochlear implants. I have indeed heard (listen to the prejudicial verb) from several people in the deaf community who felt that my portrayal was accurate and that it brought out some of their own feelings on the issue of their difference.

Like Ned Rise in your early novel Water Music, Peck Wilson is a talented, resourceful, and lawless entrepreneur. Could you share your observations about the novelistic appeal of such characters? What is it that draws you to personae like these?

I am fascinated by this sort of personality. It is the same personality most novelists are saddled with, as were the real-life figures upon whom I’ve based past novels, Dr. Alfred C. Kinsey (The Inner Circle) and John Harvey Kellogg (The Road to Wellville). This is a personality type—narcissistic—which can help one focus on a given project in a very positive and compelling way, but which also, at its worst, does not allow empathy for anyone. That is, such figures, whether they be gurus, politicians, preachers or what have you, gather people to them only in pursuit of their own agenda. They cannot see any point of view but their own (and the ability to use point of view is what saves novelists from entering the realm of the casually evil, like Peck). What I like about Peck is his obliviousness. He doesn’t see himself as a bad guy, but rather just someone atop the Darwinian heap and fully welcome to all society’s rewards.

Have the movie rights have been optioned for Talk Talk? You’ve seen at least one film adaptation before with The Road to Wellville. Does the idea of another film adaptation of one of your books fill you with excitement or trepidation?

Excitement, mais oui! All that color, that movement, the music, those faces!

I am happy to report that the movie rights were sold before the book was released. Universal Pictures has assigned a director, Gary Fleder, who has made several intriguing and fast-paced films (dare I call them thrillers without damning myself?) in the past. Many short films have been made of my work, with mixed results, and one major Hollywood film, The Road to Wellville, which I loved. I still think it’s one of the funniest movies ever made, very nearly ascending to the great height of The Big Lebowski, the apex of all funny movies. There are a number of films based on my stories and novels in the works, which I try to keep updated on tcboyle.com for any who may be interested.

Since I don’t participate in film work in any way—my job is to create fiction on the page and if I had nineteen lifetimes I don’t think I would ever get enough of it— I simply trust to the filmmakers and hope for the best.

As I mentioned above, Nabokov has influenced my latest, especially his magical Pale Fire. As of this writing—in June of 2007—I am nearly finished with this book, another historical setting built around another of my egomaniacal (yes, and quintessentially narcissistic) real-life heroes, Frank Lloyd Wright. The book is called The Women, and it is written for the most part from the points of view of the four principal women in the architect’s life, as filtered, in a Nabokovian way, through a narrator who provides introductions to each of the three sections and a footnoted commentary throughout. He is an invented character named Tadashi Sato, who, in my telling, was one of Wright’s apprentices at Taliesin in the 1930s. I’m enjoying the opportunity to revisit Japanese culture, which I haven’t explored since 1990’s East Is East, and, with good conscience, eating plenty of sushi (or maybe with bad conscience, considering the global-warming and mass-extinction revelations of A Friend of the Earth). I should say too that the book is very, very funny, albeit necessarily tragic in the end.