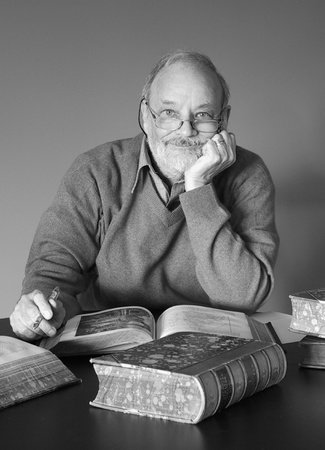 Alan Bradley is the New York Times bestselling author of many short stories, children’s stories, newspaper columns, and the memoir The Shoebox Bible. His first Flavia de Luce novel, The Sweetness at the Bottom of the Pie, received the Crime Writers’ Association Debut Dagger Award, the Dilys Winn Award, the Arthur Ellis Award, the Agatha Award, the Macavity Award, and the Barry Award, and was nominated for the Anthony Award. His other Flavia de Luce novels are The Weed That Strings the Hangman’s Bag, A Red Herring Without Mustard, I Am Half-Sick of Shadows, Speaking from Among the Bones, The Dead in Their Vaulted Arches, As Chimney Sweepers Come to Dust, and Thrice the Brinded Cat Hath Mew’d, as well as the ebook short story “The Curious Case of the Copper Corpse.”

The Golden Tresses of the Dead

The Grave’s a Fine and Private Place

As Chimney Sweepers Come to Dust

The Dead in Their Vaulted Arches

The Curious Case of the Copper Corpse: A Flavia de Luce Story

A Study in Sherlock