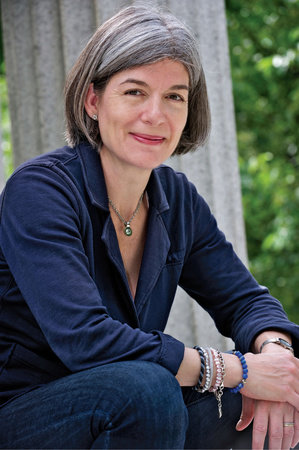 Claire Messud’s The Emperor’s Children, was a New York Times, Los Angeles Times, and Washington Post Best Book of the Year. Her first novel, When the World Was Steady, and her book of novellas, The Hunters, were both finalists for the PEN/Faulkner Award; and her second novel, The Last Life, was a Publishers Weekly Best Book of the Year and Editor’s Choice at The Village Voice. All four books were named New York Times Notable Books of the Year. Messud has been awarded Guggenheim and Radcliffe Fellowships and the Strauss Living Award from the American Academy of Arts and Letters. She lives in Cambridge, Massachusetts, with her husband and children.

David Golder, The Ball, Snow in Autumn, The Courilof Affair

The first book I read by Claire Messud, The Last Life, is set in southern France, and is narrated by a young woman who recounts the history of her family’s life there. Messud’s intimate conjuring of the mistral that blows in the winter months convinced me that she was a French writer. It turned out that I was half-right: Messud’s father is French, her mother Canadian, and Messud grew up in a variety of locales.

Her knowledge of the world has always lent itself to her six previous novels – including The Emperor’s Children and The Woman Upstairs – an aura of cosmopolitan sophistication. She is a master of craft, writing sentences that sing.

Messud’s lastest novel, The Burning Girl, is a departure for her. She tells the story of two adolescent girls, Julia and Cassie, and how the pressures imposed by the adult world change their passionate friendship. Their adventures begin when the girls explore an abandoned building that used to be an insane asylum. It will remind many women of scenes from their own girlhood, those moments when the belief that a girl could do anything ran smack-dab into the dangers from which your parents can no longer protect you.

We spoke with Messud by telephone in early August.

PENGUIN RANDOM HOUSE:One thing I have noticed in reading novels in which girls figured is that part of this passage of going from not knowing to knowing is the recognition on the part of the girls of how vulnerable they are in the world. I was wondering if you think that the process of female adolescence involves a loss of trust in the world.

CLAIRE MESSUD: I do. But my own experience from watching my daughters, my nieces, and my children’s friends’ experiences – and I know that it happens in each generation – is that for girls there is this halcyon time in childhood, in pre-pubescence, when girls are nine, ten, eleven, they have some autonomy and some sense of agency in the world. Often it’s a time when girls believe that they will – I don’t know – fly to the moon, be president, and be brave, and they can do anything. And probably this happens for boys in other ways. But it’s a nasty shock – a blow – for girls, it’s an awareness of vulnerability, physical vulnerability that curtails all sorts of senses of possibility, of many different ideas of what’s possible.

If you ask a ten-year-old girl what she wants to do when she grows up and a fourteen-year-old girl what she wants to be when she grows up, in many cases, the older child will have a much less free sense of what’s possible. I think there are a lot of reasons why that is so. But to inhabit the female body – certainly in western culture, where misogyny is so profound, I think we don’t even try to address it anymore. We try to put out local fires but the narratives that exist for girls and women are narratives of containment.

PRH:I’m curious about Cassie’s family. I was really struck when Cassie’s mom becomes involved with the doctor who has the “new convert’s” passion for strict religious living. It was almost the exact same situation that happened to a girl I went to high school with. But before this happens, Cassie and Julia are going to their secret place in the summer, and they seem to be caught up in a pagan-mythological life of their own creation. And I was thinking about how when the stepfather comes into her life, he’s imposing this patriarchal Christian life onto Cassie. Am I reading too much into that?

CM: I didn’t think of it entirely in those terms, but that is certainly there. Her mom has been a Christian all along and Cassie has gone along to Youth Group because that’s what they do. In my mind, his version of that is about control. That can be about control of her. And it is, as it were, the patriarchy.

There’s this other element, when you say that their childhood is more “pagan.” For me, one of the movements of the book is that, in childhood, we’re encouraged to live in our imaginations, to make up stories, to explore possibilities in an imaginary way. And then our understanding of the transition to adulthood is that we give away childish things and we live in reality. But of course we don’t ever live in reality. We just make up a different set of stories. In my mind, there’s no less game playing and storytelling in their teenaged so-called adult lives. Cassie makes up this whole story, and Julie makes up a story of a story. Everybody’s always living in fiction just as much as children but the way our stories are faked is curtailed by all sorts of narratives we take into our own lives about what are the true narratives and what’s not. Fairies flying down from the trees to give you a magical skipping rope is not a true story. The girl being kidnapped is a true story. They’re different types of fictionalized narratives.

PRH: I read in an interview with you that you said, and I’m paraphrasing, “Writing is about what it’s like to be alive on the planet. So much of what we live is not articulated.” I’m wondering if this is why you’ve chosen literary fiction as your genre. Do you think you could be writing in a different genre and still be writing about life on the planet?

CM: That’s a very interesting question, and interesting for me in the context of the extent to which I was both engaging with and trying to undermine or play with readerly narrative expectations that have to do with understandings of genre. Specific genres, but also our understandings of the shape of a narrative or what narrative satisfaction is. But I think the simplest answer for that is when somebody asks me what kind of fiction I write, usually my answer is “the kind that is no kind.” I suppose it falls under some rubric of literary fiction. I hope it will be something that people will read and enjoy. But it isn’t something that is plot-driven nor for which a certain set of narrative satisfactions are aimed.

If you’re writing a thriller and you don’t make it compelling then you’ve really not done your job. So it’s easier for me not to set out with certain goals and then I can’t see them as unmet. It’s like life generally: If I’m not aiming to be physically fit, then I’m not always thinking about being unfit. But my thing would be not to be constrained by anything.

CM: I think for me in writing that … my daughter’s sixteen, my son’s thirteen, and so for the past couple years not so much. But for a good decade I was reading and re-reading children’s books I loved aloud with my kids, and Greek myths. I realized how much my love of story, love of narrative came from those early formative experiences, which is in this book for me.

Early on, I said to somebody that “I want to write a children’s book for grownups.” I want to write something that has the liquidity, the “there-ness” of a children’s book, which is to say that you’re immersed in it, you’re just reading it, you’re not analyzing the writing. Part of that is it’s about the transition from childhood into adulthood and when you leave childhood you’re trailing clouds of glory, some sense of the divine that you then relinquish.

If you think about animals in this book, they are very important because they’re important in children’s lives, in their day-to-day lives, and in the stories that we tell them. Animals are actors. Animals are characters. Animals have agency. And Julia still carries that with her. And we do that now with our dogs. We ascribe to them all sorts of characteristics that they may not have. We anthropomorphize them, and we treat them much more in a childlike way than we acknowledge. So I don’t personally go with the ghosts. It’s not that I don’t believe ghosts exist, but I certainly do live with the symbolism of animals.

After a long series of fierce rationalism, I feel I’ve reached a point in my life where all I can say is, “All I know is that I do not know.”

When my parents were still alive, they used to drive every day to a lake to observe the swans. And now that they’re gone, when I see a pair of swans I think, “There are my parents.”

And that’s Julia’s logic. It’s the logic of childhood. And I realize that at fifty, that’s what I’ve come back to.

It’s liberating. The way I saw the world as a child was not wrong. And it’s okay to see the world that way. If it doesn’t hurt anybody.