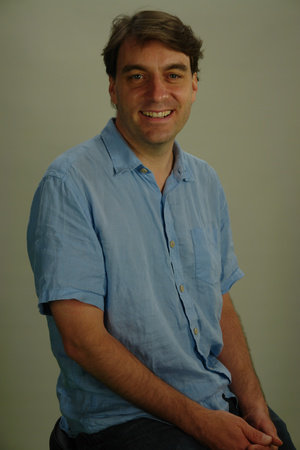 I’d love to say that I grew up reading Cervantes and Tolstoy, but I didn’t. I grew up watching The Munsters and Hogan’s Heroes. God, I hate to think how many hours I spent in front of the TV as a kid. I didn’t become a serious reader until after college. Now when I meet people who don’t read books, I want to say to them, “You’re missing out!” I really think it’s their loss. I don’t mean that in a snobby way either, or because I’m a writer. It’s too bad they’re not taking part in perhaps the most satisfying form of entertainment, enlightenment, and adventure.
I started out writing screenplays because I grew up on film and television, and it was just the mode of storytelling with which I was most familiar. It wasn’t until after I attended film school, and had a couple screenplays produced, that I discovered I actually enjoyed books more than movies. Part of what took me to books was my frustration with the Hollywood system. At the time, production companies were interested in movies that were more like a one-note joke, and had almost nothing to do with the human experience. In fact, my agent pleaded with me not to write “character studies.” I remember one afternoon I was trying to write a “marketable” screenplay in the Beverly Hills Public Library. Stuck trying to stretch a concept into a screenplay, I happened to look over at the bookshelf and saw a novel entitled Mrs. Bridge. I picked it up and couldn’t put it down. It was a wonderful portrait of an upper-class housewife in the 1940s–a character study. I think that was the beginning of my love affair with books.
Reading and writing books is wonderful because it’s so personal–it’s you, alone, taking in what the author has written. There’s no laugh track to tell you something is funny, no composer writing songs to tell you when to cry. It’s you and the written word. The author provides you images, dialogue, and plot, but it’s up to you, the reader, to fill in the details based on your own experiences.
I wrote my first young adult novel without knowing there was such a genre as young adult. I just wanted to write about experiences that paralleled my own. The teenage years are high drama, fraught with pressures and conflicts: you’re trying to find out who you are, you’re discovering romantic love for the first time, you’re trying to deal with what your body is craving against what society is telling you is not acceptable. What’s more, you’ve got to figure out what you’re going to do with your life.
I tend to write about my native state of Kansas. Why? I’m not entirely sure. I mean, I live in New York City, which is certainly more polyglot, more dynamic, more everything. But a very small town in Kansas is where I came of age, where my adolescence took place. But there’s another reason, I think. When you live in a small town, you know virtually everyone, and you know their life’s story. That intimate knowledge of your neighbor can be comforting and also stifling. A person can be too easily labeled and dismissed. But, on the flip side, everyone knows you, and that makes you a celebrity in a way. It’s like that adage: it’s better to be talked about than not talked about. I think it’s ironic that, while growing up, I couldn’t wait to get out of Kansas, and now I write about it. I guess, on a very simple level, I’m trying to make sense of where I came from.
When I started writing my first novel, I found it incredibly difficult. I didn’t know what I was doing and I spent days tweaking each paragraph. I thought I had to sound literary and highly intelligent. After about a month, I realized it was going to take my years to finish this thing. Struggling with a way to speed the writing up, I came to the conclusion I had to get out of my own way. So, I dropped all literary pretension–I was going to write the way I spoke, and just let it fly. I also decided not to use the computer for the first draft. I found that blinking cursor made me nervous. I retired my laptop computer to the bottom desk drawer, took out a legal pad and pen, and just kept the pen moving. I filled dozens of those yellow tablets with my scribbling–and the writing came to life. Soon my characters were telling the story, not me.
I still write first drafts by longhand. Later, I enter it into the computer and then I edit and edit and edit. Computers are great for that. But I found them too cold, too removed, too impersonal for writing a first draft. That first draft should come from the heart, through the hand, and onto the page. It should be intimate, like, well, reading.