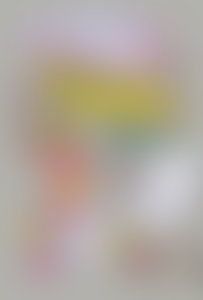 I used to be sort of terrified of children. You know how when you’re a little kid and you see some strange man that you don’t know, and maybe they have a big bushy beard, and you think he’s just about the scariest monster you ever saw? Well, as an adult, that’s pretty much how I felt about children. But then I became a father myself, and now I see that kids aren’t so scary after all! In fact, they’re a lot more fun than most adults. Now when I go to parties and both kids and adults are there, I usually end up mostly ignoring the adults and playing with the kids instead.

It’s fun to tell kids stories. My son likes them exciting and dangerous with a lot of laughs, and so that’s the kind of stories I draw for him. When telling bedtime stories, I like to make them a little different every night. But after a couple hundred nights, eventually you figure out the best way, and that’s the way that ends up going in the finished book.

Another thing that’s fun to do is to take the stories and act them out. Everybody gets to pick a character from the story, and it always ends up turning out a little different every time. Maybe one time the Squirrel gets away, maybe another time the Hungry Fox gets to eat him! I can do a real deep scary voice for the bad guys, but it’s fun to hear little kids try to do deep voices, too.

Telling stories is like playing. Drawing is playing, too. Sure, it can sometimes be hard work, but if it’s too hard you’re really not doing it right. The stories need to flow out like magic and surprise you with their power and fill you with a sense of wonder. This is really the secret to being a good storyteller. Think up something that takes you by surprise.

The best way to do that is let your whole life become a game, and play all the time, thinking up funny and interesting things every other moment as you go about your day. I also like to play in a rock band, which is pretty much the same thing as writing and drawing stories but much, much louder and sometimes even sillier and crazier.

I did pretty well with my vow . . . I’m not such a child that I can’t be a good dad, but at least I’m also not such a grown-up that I can’t have fun! When I made the vow, I knew I couldn’t stop from physically growing up, but I knew that I wanted to keep playing and having fun, and most of all, not lose the sense of wonder that I feel. The rain, the sunshine, the snow, laughter, lightning, kitties and kisses . . . it’s all so magical and wonderful and inspiring, and it helps me write and draw my books.

Monkey vs. Robot: The Complete Epic