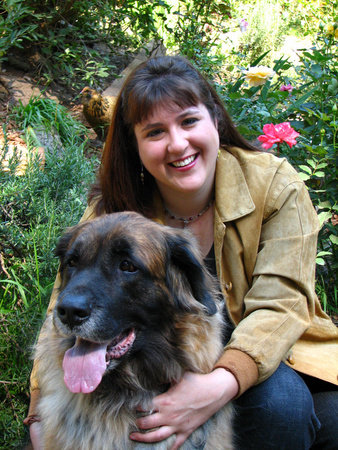 Have you ever played a game called Three Truths? Basically, it’s like a multiple choice test except you have four choices and one of them is a total lie–the others are true…The point of the game is to figure out which one is a total lie . . . what’s that? You wish you could play right now? Well, goody because I think that’s much more fun than a dry bio–plus you could win big prizes (that’s a lie), but you’ll have the invigorating experience of being right. And really when it comes down to it, how can a new car beat being right?

We’ll start off easy to get you warmed up. First set: 1) Amber Kizer is my real name; 2) I live on an island; 3) I have a rooster named Fabio; 4) I have parakeets named Chirp and Pecker

Think you know which one is false? Say it out loud, no cheating! Ready? I do not have a penname, which means Amber Kizer is, in fact, my real name (although, I have considered writing under the name J.K. Rowling, just because it has such a catchy ring to it). I do live on an island. Unfortunately, it’s not a gorgeous tropical island. It’s in the Pacific Northwest where gray skies and green trees (thanks to the rain!) are the most popular colors. I do have a rooster named Fabio. He is named after a very famous cover model for romance novels–the human Fabio is beefy, doesn’t own t-shirts, and has long blond hair he swings around seductively. The chicken Fabio isn’t beefy (tastes like chicken), doesn’t own t-shirts, and has long blond feathers, which he does indeed throw around like he’s in front of a wind machine. I do not have parakeets because I don’t like cages and in my mind having parakeets is one step away from wearing housecoats, lycra in public, and owning 50 cats, all named Sweetie.

It’s going to get harder . . . 1) I make wedding cakes for fun; 2) I love reality TV–especially dating shows; 3) I have four kids and am married; 4) I don’t miss a minute of March Madness basketball if I can help it.

Think you know? I do make wedding cakes for fun, and birthday cakes, and I love you cakes, and cakes of all kinds. I love to bake. If you want to see photos of cakes I’ve made just visit my Web site at AmberKizer.com. I do love reality TV–and especially dating shows, the raunchier it is, the funnier and the better it is. Please don’t hold this against me, I’m in therapy to break the addiction! I adore college hoops and try not to miss any of the tournaments–men’s and women’s. I’m not married and don’t have kids–I’m young and, while I do hope those things are in my future somewhere way down the line, they’re on the wish list rather than in the cart. I am, however, in stock and ready to ship.

I do read a huge, high stack of books all at the same time–it keeps it interesting. There’s too much to learn in the world to read one from start to finish. So I read a chapter, change books, read a chapter and so on, until whatever I’m reading is so compelling I have to finish the book. Pretty much any topic is game, but I stay away from math theory and computer programming because they just give me a headache. I do quilt–I love working with colors and fabrics. I don’t quilt as often as I’d like because these hands are usually wrung dry from typing, but yum, it feeds my creative soul to stitch fabrics together. Roses are a favorite, but my ultimate favorite flowers are lilies–Casablanca white ones, Stargazer pinks, any of the really fragrant lilies–the scent makes my soul smile. So that was kinda a trick one because, of course, I collect amber jewelry. I love it and it looks good with my coloring, so it’s a win win.

Now, to the super-duper difficult ones: 1) I’ve wanted to be a writer since I could talk; 2) I wrote my first book at the age of five called “Wiggle Me, Tiggle Me”; 3) I only write when my muse taps me on the shoulder; 4) I don’t have to do much editing; it’s usually close to perfect the first time around.

Think you know? Ha ha, changed it up–they’re all LIES! LIES, LIES, LIES! Okay, so maybe that wasn’t fair, but it was fun. I always wanted to be a criminal prosecuting attorney and eventually a Supreme Court Justice. (Can you spell overachiever anyone?) But I played basketball fervently, and over the course of high school, I ended up with some fairly nasty injuries to my feet and legs. Those led to surgeries, which then gave room to a rare nerve disorder. I developed symptoms at age 18 and it totally and completely sucks (just telling it like it is). In the simplest of terms, the system that controls pain signals, temperature, circulation, and all that very important stuff is corrupted to the point that it’s wrong all the time–which means my legs hurt all the time and don’t always work for me when I ask them to. So this means my life has to be fairly fluid–I can not tell you how many plans I’ve had to cancel, how many shows I’ve given away tickets to, how many great ideas I’ve had to say “sorry” to. I know someone loves me when I say I’m hurting and they show up with ice cream and a video when we were supposed to go out. This also means that I can’t count on my legs to have a structured 9 to 5 job (although I’d love to do any number of things on a consistent basis), so I had to figure out a career that was flexible and that I could do on the good days, or from a horizontal position on the bad ones. A friend invited me to a workshop she was giving on how to teach writing to kids. I did all the activities, and I was hooked on storytelling. I came away from that six weeks with six pages of a story. I wanted to know the ending, so I kept writing.

Oh, and I should probably tell you that I started in adult romances. Yes, that’s right, I love romances and they’re completely a hoot to write–a hopeless romantic, I adore happy endings and who doesn’t like hot, steamy, monkey s—socks. Monkey socks. So I wrote one book, then another, then another. The whole time I was learning what I could about the craft–it’s like wanting to be a great artist you need to know the techniques and tools of the craft, and you have to practice. I also spent a great deal of time learning the business end of things–how agents work, how publishing works, what to expect, what to do right, and what to avoid doing at all costs. There’s so much to learn I’m convinced I will never know it all. But I worked my way up the scale from form letter rejections to handwritten notes to long, involved letters asking for revisions.

I was working on my fourth romance when a voice in my head started giving editorial input. “He put his hand where? That so wouldn’t happen . . . eeewww.” And on and on. Meet Gert. She had things to say and I desperately needed her to shut up, so I opened a new word document and went at it. I figured I’d let her go until she ran out of steam and then I could get back to the real writing. I guessed 20 pages tops before she ran out of things to say. That was 2005 and she’s still going. Nothing is off limits, she talks about everything–even the stuff parents hope their kids don’t know about. One Butt Cheek is the first in her series–the second From Butt to Booty comes out next fall.

I always edit. I always rewrite. And there are no such things as muses unless you use that as a synonym for discipline or perseverance.

My advice for anyone who thinks they want to be a writer is to hang glide. No, again that’s not the truth, but it sounds way more interesting than the truth, which is to . . . um . . . write. Also get good at surviving rejection because you have to. Because you have to put yourself out there all the time and learn how to shake it off and do it all over again the next day. You won’t get published if you don’t send it out. And you won’t get published if you send out crap that you haven’t perfected to the best of your ability. But it’s not easy, it’s not pain free and it’s not for the weak of spirit. It’s hard, competitive, and everyone thinks because they type out e-mails that writing a book can’t be much harder than that. Oh yeah, everyone thinks they could write the next bestseller without breaking a sweat, everyone thinks they’re a writer–just know that up front.

So here’s my advice–it’s really good practice to ask the cute boy out, call the girl who you’ve been crushing on since sixth grade, make yourself available and vulnerable. Because here’s the deal, they might say yes, they might have been enamored of you for ages, too. Because you could get the call that says, “We’ve got a contract offer on your book!” Or at the very least you’ll have some soul-wrenching real-life experience to write about and that, my friends, is the truth and nothing but the truth. So help me Gert.

A Matter of Days