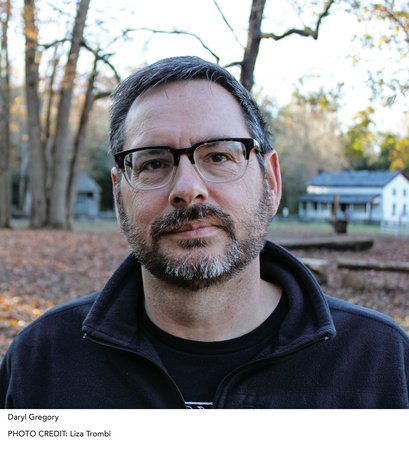 DARYL GREGORY is the author of Spoonbenders, Afterparty, The Devil’s Alphabet, and other novels. His novella We Are All Completely Fine won the World Fantasy Award and the Shirley Jackson Award.

There are plans afoot for a TV series based on Daryl Gregory’s Spoonbenders, the tale of a mildly psychic dysfunctional family. Gregory isn’t holding his breath: He’s almost as skeptical about seeing his story on television screens as he is about the existence of real psychic powers. Here’s what he told us about television pilots, cute puppies, and envelopes full of cash.

PENGUIN RANDOM HOUSE: Spoonbenders is out in paperback now, right?

Daryl Gregory: Yes, it came out at the end of June on my birthday, so it was a nice present from my publisher.

PRH: Can you give us a quick run-down for those who aren’t familiar with the book?

DG: It’s about a family of psychics who have never made a dime from their powers. They were famous for about 10 minutes in the seventies and got embarrassed on the The Mike Douglas Show. I usually have to explain to younger people that this was a really big show at one point. It takes place mostly in the nineties, when it’s 20 years past their heyday and they’re trying to get the magic back. There are mobsters and government people trying to recruit them, and hijinks ensue.

PRH: When you talk about an embarrassment on a major show, I think of Uri Geller on Johnny Carson.

DG: Oh yeah, this was totally inspired by Uri Geller. He was so hot in the seventies and there was such a craze for following Uri Geller and these people who claimed to have psychic powers. The opening quote is from Uri Geller: “You’d think that whatever causes these things to happen doesn’t want them to be proved.”

I’m like, “Yeah, I know, because you can’t prove them in front of a scientist.” Also, another major inspiration for the book was The Amazing Randi, the guy who debunked Geller. There’s a character called The Astounding Archibald who shows up in the book and is basically James Randi, but because I have actual psychic powers working in the book, I had to apologize to Randi in the acknowledgments for giving aid and comfort to the enemy.

PRH: So I take it you’re not a big believer in psychic powers.

DG: I’m not, and that’s one of the things people often ask me. I’m a skeptic. I would love to live in a world where that existed, but if it did, then Google would already be monetizing it.

PRH: Someone I know compared the family dynamic in Spoonbenders to that of the Bluths in Arrested Development. Is that accurate?

DG: Well, it’s definitely that kind of family. Each of them have their own feeble powers, and they don’t work for the same reasons that Uri Geller says they don’t work: When there’s negativity in the room, you lack confidence and they go away. It is told from five different points of view from five different characters in the family, and everything comes together in the end where all of their plot lines are related. There’s still that madcap quality. I first pitched it as The Royal Tennenbaums with psychic powers, but later, we realized that more people had seen Arrested Development.

PRH: There’s a TV show in the works. Any news about that?

DG: I just saw the final script for the pilot, and they’re trying to round up a director. After that, they’ll shop it around. It’s very exciting that they seem to be excited, but I’m always skeptical. As a writer, I just figure that nothing will work out, and if it does, it will take years, so I try not to get too excited.

PRH: I understand that. Sometimes pilots are filmed and they never even air. You can find some of them on YouTube.

DG: I have an analogy that I sometimes used. Ted Chiang asked me to stop using it, but I’m going to do so one more time. I tell new writers that at some point in your career, someone is going to come to you with an envelope of cash and a puppy, and that puppy has a 99 percent chance of dying within 12 months.

PRH: That is a bad analogy.