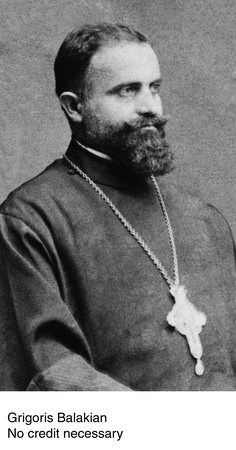 Born in 1876, Grigoris Balakian was one of the leading Armenian intellectuals of his generation. In Ottoman Turkey he attended Armenian schools and seminary; and in Germany he studied, at different times, engineering and theology. He was one of the 250 cultural leaders (intellectuals, clergy, teachers, and political and community leaders) arrested by the Turkish government on the night of April 24, 1915, and deported to the interior. Unlike the vast majority of his conationals, he survived nearly four years in the killing fields. Ordained as a celibate priest (vartabed) in 1901, he later became a bishop and prelate of the Armenian Apostolic Church in southern France. He is the author of various books and monographs (some of them lost) on Armenian culture and history, including The Ruins of Ani (1910) and Armenian Golgotha, volume 1 (1922) and volume 2 (1959). He died in Marseilles in 1934.