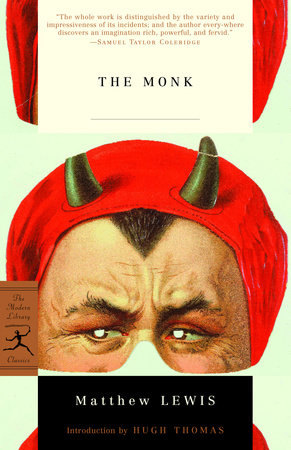 1)One of the most damning criticisms of The Monk was made by Reverend Thomas Mathias, who called it blasphemous. Because of controversy like this, Lewis excised certain passages for the fourth and fifth editions. Mathias pointed to the passage in the first edition where Antonia reads from an expurgated bible because the original was improper for women. Are there other instances of blasphemy in the text? What critiques of Christianity does Lewis seem to be making? How might the novel be considered anti-Catholic?

2)The main plot, concerning Ambrosio, derives from the story of Santon Barsisa, which appeared in The Guardian in 1713. The secondary plot, of Raymond and Agnes, which seems to be of Lewis’s own creation. What do you believe he intended by telling this multi-faceted tale? Why not let the story of Ambrosio stand alone? How do the two stories run parallel to each other?

3)How does Lewis reconcile religion and superstition? Consider the roles of the Bleeding Nun and the Wandering Jew.

4)What kind of position was Monk Lewis taking with respect to the social and religious establishments of the eighteenth centuries? Might he have been commenting on what may happen when our individual choices are taken away? Consider how this might be applicable to contemporary issues.


5)The Monk was Lewis’s only novel; he was primarily known as a playwright. Look at both the physical and structural architecture in The Monk. How might the novel be considered theatrically structured?


6)Critic Christopher Maclachlan notes that in many ways this novel presents a more positive portrayal of women’s sexuality than does other gothic fiction. Does this arguments hold true for all the female characters? What deeper significance could this proto-feminism have?

7)Consider the shifting tone throughout the novel. How do these nuances affect our reading?

8)Ann Radcliffe was disgusted by The Monk and retaliated with her version of a gothic novel called The Italian, first published in 1797. Radcliffe’s novel ends on a happy note, the lovers reuniting. This provided a stark contrast to the Lewis’s ending with Ambrosio’s demonical torture. Compare these endings. What seems to work better? Keep in mind that these novels were originally known as romance novels.
Learn More About The Monk
print

The Private Memoirs and Confessions of a Justified Sinner
James Hogg

The Country of the Blind and Other Stories
H. G. Wells

The Unfortunate Traveller and Other Works
Thomas Nashe