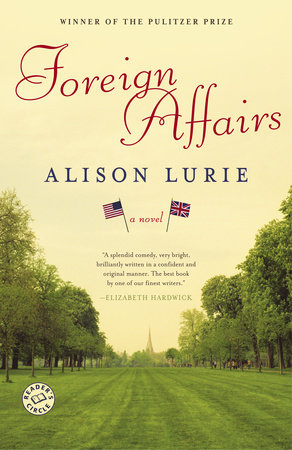 1. This novel suggests that you can expand not only your knowledge
of the world, but also your individual personality, by leaving home.
Do you agree?

2. Vinnie returns to England with certain fixed ideas and illusions
about the country. What are they? Are Vinnie’s ideas about England
proved right or wrong by this trip?

3. Vinnie Miner has never been a physically attractive woman: “Even
as a child she had a nondescript sort of face, which gave the impression
of a small wild rodent: the nose sharp and narrow, the eyes
round and rather too close-set, the mouth a nibbling slit” (p. 10). How
has this affected her life?

4. Fred Turner, unlike Vinnie, is much better-looking than most people.
How do his looks affect his relationships with women? Do you
think that there are disadvantages to being an extremely handsome
man? Is it easier to be a very beautiful woman?

5. Vinnie knows that she suffers from self-pity, which she represents
to herself as an overly affectionate, dirty-white dog she calls Fido,
who is sometimes small and sometimes large. What use is this fantasy
to her? How does the dog represent her emotional state at the beginning
of the novel? At the end?

6. How does Lurie convey the importance of social class in England?
How would you compare class hierarchies in Britain to those in the
U.S.? Is the criteria for high status different in the two countries? What
is most valued in each? Is there a clear social hierarchy at Corinth University?
If so, how would you describe it?

7. What does Vinnie’s career mean to her? Why is she so affected by
the bad review of her work in The Atlantic at the beginning of the
novel? Also consider the scene where Vinnie is gathering rhymes
from the British urchin. Is she making fun of her own field?

8. When Vinnie meets Chuck Mumpson, she does not think much
of him and does not want to see him again. Why does she change her
mind later?

9. Vinnie originally dismisses Chuck’s obsession with genealogy, calling
it “the typical middlebrow, middleclass, nominally democratic
American search for a connection with the British aristocracy” (p. 76).
Does Chuck prove her wrong? Why is his quest so important to him?

11. Foreign Affairs was one of the first novels to chronicle the sexual
evolution of a middle-aged woman. How do Vinnie’s feelings about
sex and love change over the course of the novel? How is her age relevant
to these changes?

12. Some critics have said that Foreign Affairs is a modern version of
the old folktale, “The Frog Prince.” In what way might this be true?

The Children’s Book
A. S. Byatt
Back to Top