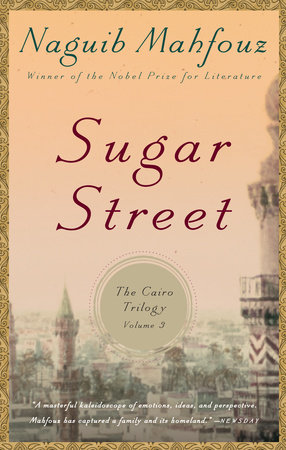 The questions and other material below are intended to enhance your group’s conversation about Nobel Prize winner Naguib Mahfouz’s Cairo Trilogy.  The general questions that follow provide topics for further discussion of the trilogy as a whole.

The British occupation of Egypt centered on the Suez Canal, which had been completed in 1869.  Beginning in 1882, they held the country loosely with a standing army and a cohort of civil servants, and though they repeatedly promised independence, they declared Egypt a protectorate in 1914.  Even after their victory in World War I, the British refused to give up their role in Egypt.  Rising Egyptian nationalism came to a head during the demonstrations of 1919, during which some eight hundred Egyptians were killed.  In 1919 the leader of the Wafd party, S’ad Zaghlul, put together a delegation to present a declaration of Egyptian independence to the government in London.  They also planned to present their case to world leaders at the Paris peace conference.  Instead of being allowed to go abroad, Zaghlul and others were taken into exile in Malta.  When this failed to quell the nationalist fervor, Zaghlul was freed.  Efforts by Zaghlul and Ali Pasha to win an independent Egypt finally succeeded in 1922, but Britain maintained control of the Suez Canal zone and much of the administration of the country.  The Wafd nationalist party retained wide popular support, in part because of King Fuad’s collusion with British power.  Fuad’s son and successor Farouk signed the unpopular Anglo-Egyptian treaty in 1936, provoking student demonstrations once again.  Support for the Wafd party began to collapse when it became clear that they had not been effective in ridding Egypt of the British.  The Muslim Brotherhood, an Islamist party that rose in 1928, became a political presence with its wide-reaching social and charitable work and its slogan, “Islam is the solution.”  In 1952 another revolution occurred.  Led by Gamal Nasser and Muhammad Naguib, it was aimed at overthrowing King Farouk and the constitutional monarchy, and establishing Egypt as a republic purged of foreign influence.

1. Questions on the Cairo Trilogy (including Palace of Desire and Palace Walk)

1. The trilogy dramatizes the human quest for a sustaining belief—mainly through Kamal, but also through Khadija’s sons Abd and Ahmad al-Munim.  Kamal is in search of his own truth, and he struggles to break from the religious orthodoxy of his upbringing and to attain a more modern and Western intellectual life. Are any belief systems found to be sustaining for the characters in the trilogy?  Does Kamal eventually arrive at a satisfying intellectual, spiritual, or political position?

2.  In Palace of Desire, Kamal is obsessed with the worldly French-educated Aïda.  In a moment of illumination, he realizes that his father has created the model for his own masochism in love.  He speaks in his mind to his father: “Do you know what other consequences there were to loving you despite your tyranny? I loved another tyrant who was unfair to me for a long time, both to my face and behind my back. She oppressed me without ever loving me. In spite of all that, I worshipped her from the depths of my heart and still do. You’re as responsible for my love and torment as anyone else. In any case, Father, you’re the one who made it easy for me to accept oppression through your continual tyranny.”  In what other ways have the sons, daughters, and wife of ASA been warped by their relationship with Al-Sayyid Ahmad?

3. In the final chapter of Palace of Desire, while the husband and sons of Aisha are near death from typhoid, Yasin’s wife, Zanuba, goes into labor, and the newspaper announces the death of the political leader Saad Zaghlul.   What is Mahfouz expressing, in the trilogy, about his understanding of time, change and heredity?

4. Mahfouz’s women are very strong, whereas the men tend to be childish, self-indulgent, and relatively weak.  Compare the characters of Al-Sayyid Ahmad and his wife Amina, for example.  What does this contrast suggest about the family structure Mahfouz portrays?  How do cultural and familial assumptions about women and sexuality influence the romantic lives of Yasin and Jamal?  How do they think about and express their desires, and what, if anything do they have in common with their father in this regard?

5. Mahfouz was aligned with the first wave of support for the Wafd party, represented by Fahmy in Palace Walk.  He said, “Maybe my generation of intellectuals was the last one that really believed in democracy. . . . I was proud of our 1919 revolution and proud to be a Wafdist.  But the top priority of the revolution was not democracy; it was to get rid of foreign rule.  Egypt was the first country in our century to rise up against European occupation.  The people, led by the Wafd, ended the protectorate but failed to gain real independence, and, in any case, the Wafd did not know how to govern in a democracy.  Democracy is not deeply rooted in our culture.  Egyptians would make sacrifices for independence, but they did not value democracy, and so, step by step, our system fell apart. . . .  I believe that the blame really belongs to Britain’s colonialism and Egypt’s kings.  But, whoever was responsible, most Egyptians had concluded by the start of World War II that democracy offered nothing—not social justice, not freedom, not even full independence.  They laughed at democracy” (quoted in Weaver, 40).  How might Mahfouz have felt had he lived to see the wave of protests that took place in 2011, as well as the trial of Hosni Mubarak?

Naguib Mahfouz was born in Cairo in 1911 and began writing when he was seventeen. As a boy, he witnessed the violent confrontations between British and Egyptians demanding independence in the popular uprising of 1919.  A student of philosophy and an avid reader, he produced works ranging from reimaginings of ancient myths to subtle commentaries on contemporary Egyptian politics and culture.  Over a career that lasted more than five decades, he wrote 33 novels, 13 short story anthologies, numerous plays, and 30 screenplays.  His most famous work is The Cairo Trilogy, consisting of Palace Walk (1956), Palace of Desire (1957), and Sugar Street (1957), which focuses on a Cairo family through three generations, from 1917 until 1944.  In 1988, he won the Nobel Prize in Literature, the first writer in the Arabic language to do so.  He died in August 2006.

The Day the Leader Was Killed
Naguib Mahfouz

When We Were Birds
Ayanna Lloyd Banwo

The Story of Zahra
Hanan al-Shaykh

The Simple Past
Driss Chraibi

The Children of the Ghetto
Elias Khoury

How to Be a Revolutionary
C.A. Davids