One Step Behind Reader’s Guide 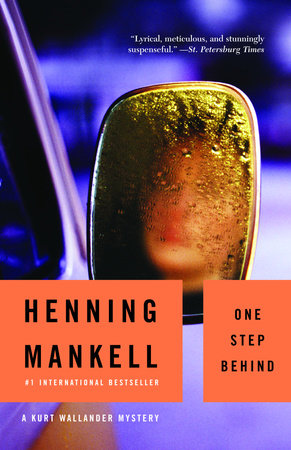 One Step Behind Reader’s Guide

print
One Step Behind Reader’s Guide

The introduction, discussion questions, author biography, and suggested reading list that follow are designed to enhance your group’s reading of Swedish novelist Henning Mankell’s most chilling Kurt Wallander mystery, One Step Behind.

Things are not going well for Inspector Kurt Wallander. Driving east from Ystad, Sweden, early one morning, he falls asleep at the wheel and narrowly avoids a head-on collision with a truck. His fatigue has become constant. A visit to the doctor reveals the reason: his blood-sugar level is nearly off the charts. He is fifty years old, overweight, suffering from chronic insomnia and now diabetes. And these are just his personal problems. Three youths have apparently gone missing and a fellow detective, Svedberg, has been brutally murdered in his apartment, killed by a close range shotgun blast to the head. Are the two cases related? Svedberg seems to have been secretly involved with the youths, but it’s not clear how. When their bodies are found in a nature preserve, and when a newlywed couple is murdered shortly after, Wallander finds himself in the midst of the most difficult investigation of his career. He must track down one of Sweden’s worst serial killers, a man who seems always to be one step ahead of the police, a man who in fact seems to be following them as much as they are following him, a man who intends to strike again. The killer plans his crimes with meticulous care, relying on knowledge secret to everyone except his victims and himself, and he seems motivated, bizarrely enough, to strike when people are at the height of their happiness. Wallander doesn’t have one solid lead or suspect; the parents of one of the murdered youths are publicly accusing him of mishandling the investigation; the Police Commissioner is not happy; the DA is running out of patience; one of Wallander’s own detectives is so disillusioned by the brutality and senselessness of the crimes that he’s considering quitting the force; Wallander himself is on the verge of physical and emotional collapse. And things are about to get worse.

Written with Henning Mankell’s trademark attention to the fine details of police work and keen insight into the darker workings of the human mind, One Step Behind brings readers one step closer to a horrible—and seemingly
insoluble—crime.

1. One Step Behind begins with Inspector Kurt Wallander nearly being killed in a car accident after falling asleep at the wheel. What tone does this near-death experience set for the novel? What role does Wallander’s fatigue play in the events that follow?

2. Early in the novel, Wallander thinks of his colleagues: “They don’t know much about me and I don’t know much about them. We work together, maybe over the course of an entire career, and what do we learn about each other? Nothing” [p. 29]. In what ways can the novel be read as a meditation on the limits of human knowledge? Where else in the story does this lack of knowledge play a significant role?

3. In trying to fathom the murderer’s mindset, Wallander thinks, “I’ve never believed in pure evil. There are no evil people, no one with brutality in their genes. There are evil circumstances and environments, not evil per se. But here I sense the actions of a truly darkened mind” [p. 162]. Is he correct in thinking that brutal behavior is a result of one’s environment rather than of one’s character? What motivates the killer in One Step Behind to commit his crimes?

4. Wallander is often “struck by the feeling that something [isn’t] quite right” [p. 65]. To what extent does he rely on feeling and intuition to guide him in solving the mystery in One Step Behind?

5. At various points throughout the novel, and especially after Isa is murdered, Wallander is accused of botching the investigation. Are the criticisms brought against him justified? What mistakes does he make? Should he have been able to foresee his errors?

6. Wallander is an unusually disheveled kind of detective. Far from being a self-confident tough-guy, he’s forgetful, full of self-doubt, in poor health, prone to mistakes, and perpetually exhausted. Why do these characteristics tend to make him a more, rather than less, appealing protagonist? What would the novel lose if Wallander were more conventionally competent? What qualities make him a forceful figure, despite these weaknesses?

7. Wallander observes that there was a similarity between his murdered colleague Svedberg and the young people killed in the nature preserve: “They had all had secrets” [p. 210]. Who else in the novel has a secret? In what way is the novel really about keeping and uncovering secrets?

9. Late in the novel, as Wallander and the other detectives come close to despair, Martinsson argues that the killer has no motive, that he kills simply “for the sake of killing.” When Wallander disagrees, Martinsson says, “Until a few years ago, I would have agreed with you: there’s an explanation for all violence. But that just isn’t the case any more” [p. 331]. Does this particular killer have an understandable motive? Or is he right in suggesting that violence in our time is increasingly senseless?

10. How is Wallander able to solve this mystery? What are the major turning points in his investigation? What qualities of character and intelligence enable Wallander to apprehend the killer?

11. What picture of Swedish society emerges from One Step Behind? How do the novel’s minor characters—Isa Edengren and her wealthy parents, the bank director Bror Sundelius, Svedberg’s cousin Sture Bjorklund, the mailman Westin, and others—contribute to the overall social reality of the novel? Are Martinsson and Wallander right in thinking that Swedish society is unraveling?

12. One Step Behind is preceded by an epigraph from the Second Law of Thermodynamics: “There are always more disordered than ordered systems” [p. vii]. And Wallander thinks to himself, “reality was rarely reasonable” [p. 98]. How is this disordered sense of reality conveyed in the novel? Which plays a greater role in solving the murder mystery in the novel: the use of reason or the reliance on spontaneous, irrational hunches?

13. Of the gawkers who come to look at a crime scene, Wallander says, “They probably get a thrill from being in the presence of the unthinkable. . . . Knowing that they themselves are safe” [p. 315]. Is this, at least in part, the reason why people read thrillers?

14. How does One Step Behind differ from American thrillers? What qualities distinguish the novel, and its hero, Kurt Wallander, as distinctly European?

Internationally acclaimed author Henning Mankell has written eight novels and a collection of short stories featuring Kurt Wallander. The books have been published in thirty-three countries and consistently top the bestseller lists in Europe, receiving major literary prizes (including Great Britain’s Gold Dagger in 2000) and generating numerous international film and television adaptations. He has also published many other novels for children, young people, and adults, and is one of Sweden’s most frequently performed dramatists. He has spent many years in Africa, where a number of his novels are set. Born in 1948, Mankell grew up in the Swedish village of Sveg. He now divides his time between Sweden and Maputo, Mozambique, where he works as a director at Teatro Avenida.

Prayer for the Dead
James Oswald

A Demon in My View
Ruth Rendell

The Master of Rain
Tom Bradby

A Secret About a Secret
Peter Spiegelman

The Brotherhood of the Rose
David Morrell

The Death Instinct
Jed Rubenfeld
Back to Top