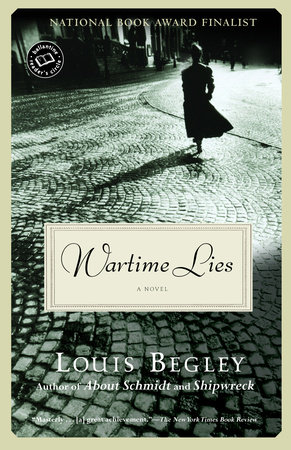 1. In Wartime Lies, the religious tension is evident from the
very beginning as Maciek tells his tale. What events occur
that mark the increasing tension from Maciek’s perspective?

2. The passages from the perspective of “the man with sad
eyes” are meticulously placed throughout the novel. Using
your “sympathy and imagination,” what links can you draw
between the content of these passages and the moment in
Maciek’s life they interrupt?

3. In chapter four, Maciek punches Pan Wladek in the
chest. Why does he react so violently to the accusation
(made most likely as a partial jest) that he has been “evil” by
cheating?

4. Louis Begley mentioned that Dante could be considered
“the greatest connoisseur of evil.” In what ways does Dante
and his Inferno relate to the experiences described in Wartime
Lies ?

5. Seemingly more than most young children, Maciek is
somewhat obsessed with being liked. Why do you think this
is? And how does this conflict with the “show” that he and
Tania are constantly putting on?

6. At one point, Maciek tells us, “Tania thought she loved
Reinhard, probably as much as she ever loved anybody”
(page 68). Throughout the novel, how does Tania relate to
men and love?

7. There are several ways in which the title, Wartime Lies,
relates to the principal characters in the novel. What are
some of those ways? And how have these lies forever
changed Tania and Mayciek’s sense of ethics and morality?

8. If the world of Wartime Lies is one where everyone bears
a burden of guilt, what guilt do Maciek, Tania, Grandfather,
and Reinhard carry?

9. When Maciek must attend catechism classes, something
in his perception shifts. How does Maciek feel about this
experience?

10. How does Wartime Lies compare to other novels about
the Holocaust you may have read?

Toby’s Room
Back to Top