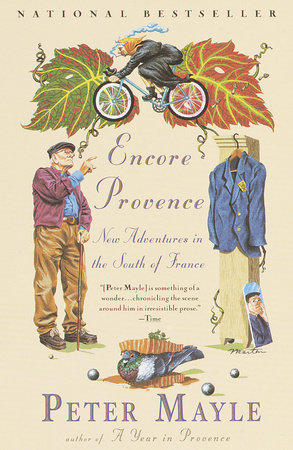 In Encore Provence, Mayle returns to Provence after an absence of four years and plunges into a new round of adventures (including a fascinating tour of Marseilles, a visit to a school devoted to the development of talented nostrils, and a search for the perfect corkscrew) and new reflections on the treasures that make even the most ordinary day in Provence memorable.

1. Mayle writes "Memory is a notoriously biased and sentimental editor, selecting what it wants to keep and invariably making a few cosmetic changes to past events" [p 6]. Do you think this is true of your own memories of favorite times and places?

2. How do Mayle’s experiences in America sharpen his appreciation of Provence? Why does he cite the bustling, colorful country markets as the best example of what he missed most during his time in America [p. 14]? How do the markets embody what he loves about Provence?

3. What insights does Marius’s story about the murder of the handsome butcher give you into the ways of life in a small French village? How does his detailed scenario of his own death shed light on the traditions and values of Provence [p. 173-5]?

4. How does Mayle’s "recipe for a village" compare to your own version of an ideal spot? Do you think it is possible to find such a place in America, or have we "advanced" too far to reclaim the kind of simple pleasures Mayle finds in abundance in Provence?

5. Discuss Mayle’s sharp attack on Ruth Reichl’s assessment of Provence [p. 38-43]. Is he overly defensive about his beloved home or do you think that Reichl, a well-known critic, in fact failed to prepare herself properly for her trip and lacked the curiosity and the skills to seek out all that Provence has to offer?

6. Mayle offers "Eight Ways to Spend a Summer Afternoon." Which of Mayle’s recommendations appeal to you the most and why? What other outings described in the book–for example, the trip to the olive oil factory–would you add to your list of things to do while in Provence?

7. Do Mayle’s descriptions of the people he meets conform to the impressions you may have formed on visits to France or through books and movies? Mayle suggests that the leisurely pace of life, the sunshine, and the abundance of the south encourage the general good humor and cheerfulness of the Provenceaux [p. 12]. Do you think a similar dichotomy between north and south exists in this country?

Peter Mayle spent fifteen years in the advertising business, first as a copywriter and then as a reluctant executive, before escaping Madison Avenue in 1975 to write educational books for children. In 1990, Mr. Mayle published A Year in Provence, which became an international bestseller. In addition to writing books which have been translated into more than twenty languages, Mayle has contributed to the Sunday Times, Financial Times, Independent, GQ and Esquire. He and his wife and two dogs live in the South of France.
Learn More About Encore Provence
print

Secrets of the Sommeliers
Rajat Parr and Jordan Mackay

Every Day in Tuscany
Frances Mayes

The Feast Nearby
Robin Mather

The Food of Italy
Waverley Root

The Sommelier’s Atlas of Taste
Rajat Parr and Jordan Mackay

By the Smoke and the Smell
Thad Vogler

A Boat, a Whale & a Walrus
Jess Thomson and Renee Erickson

The Art of Living According to Joe Beef
Meredith Erickson, David McMillan and Frederic Morin

A New Turn in the South
Hugh Acheson
Back to Top