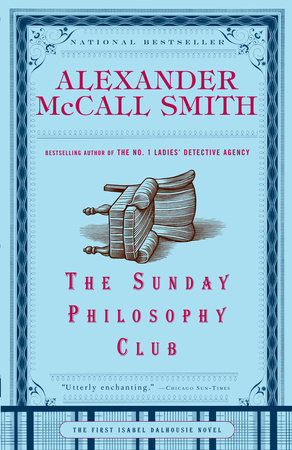 “Charmingly told. . . . Its graceful prose shines, and Isabel’s interior monologues—meditations on a variety of moral questions—are bemused, intelligent and entertaining.” —The Seattle Times

The introduction, discussion questions, suggestions for further reading, and author biography that follow are intended to enhance your group’s conversation about The Sunday Philosophy Club, the first book in a new series by the marvelous Alexander McCall Smith, creator of The No. 1 Ladies’ Detective Agency.

Isabel Dalhousie is fond of problems, and sometimes she becomes interested in problems that are, quite frankly, none of her business. A highly intelligent single woman who edits a philosophy journal, she is also a person of irrepressible curiosity. So when she witnesses a young man fall to his death from the balcony of Edinburgh’s main concert hall, she sets out to discover whether he was pushed or whether, as the police have concluded, he fell. Despite the advice of her housekeeper, Grace, who has been raised in the values of traditional Edinburgh, and her niece, Cat, who, if you ask Isabel, is dating the wrong man, Isabel is determined to find the truth—if indeed there is one—behind the man’s death. Her investigation, pursued in an informal fashion, leads her into the realm of secret deals and private greed among
a few members of Edinburgh’s investment-banking community. While she pursues information about the likely suspects, Isabel engages in delightfully thorny debates, with herself and others, about the possible outcomes of moral choices along the way. Like his immensely popular series, The No. 1 Ladies’ Detective Agency, The Sunday Philosophy Club abounds in wry humor and sharp observations of human nature.

2. Geoffrey McManus is a person with terrible manners. He interrogates Isabel, wanting to know how the face of the dead man looked as he was carried out on a stretcher, then he insults her, calling her “spinster of this parish” [p. 34]. Toby, too, according to Isabel, has bad manners; she notes that he reaches eagerly for the largest pieces of the smoked salmon at dinner. Isabel speaks of “the decline of civility” [p. 108]. Why are people’s manners a point of interest for Isabel [pp. 140–41]? Should The Sunday Philosophy Club be considered a novel of manners, in the tradition of Jane Austen and Henry James? How are manners indicative of a person’s moral philosophy?

3. Judging by her realization that even though she wants John Liamor back he will never return to her [p. 47], it seems that Isabel is the kind of person who loves only once in life. However, there are hints that her affection for Jamie might develop further. Does the story suggest that Isabel and Jamie are better suited to each other than Cat and Jamie?

4. Consider the description of John Liamor [pp. 40–43] in light of “the best interests test and the personal chemistry test” [p. 73]. Is he a good choice for Isabel? What do we learn about him from Isabel’s description of their visit to Ireland [p. 81]? Is her continuing love for him purely irrational? What drives it?

5. Cat is annoyed at Isabel’s tendency to get involved in things that are none of her business [p. 69]. Isabel insists, on the other hand, that the man who fell from the balcony entered her “moral space”—and that she therefore has a moral obligation to him. Is Isabel correct in arguing for proximity as a basis for moral claims [p. 70]? If she is right in sensing that part of the reason she wants to pursue the matter is that she is simply curious [p. 71], how different is she in moral terms from the reporter Geoffrey McManus?

6. Isabel’s friendships with her housekeeper Grace and her niece Cat are reliable comforts in her daily life. What qualities does each woman bring to the partnership? What do their conversations reveal about the bonds of female friendship?

7. Isabel raises the question of unequal desire in love when she reflects, “We do not like those who are completely available, who make themselves over to us entirely” [p. 74]. Do you feel this accurately reflects Cat’s emotional reaction to Jamie? Does this explain Isabel’s continuing interest in John Liamor?

8. Why is the novel called The Sunday Philosophy Club, if the club seems to be purely notional, never having met? Are readers the members of this club, as if by reading the novel they are entering into Isabel’s mind, which is constantly engaged in philosophical questioning?

9. Having discovered, by following an impulse of “vulgar curiosity” [p. 111], that Toby is involved with another woman, Isabel wonders whether she should tell Cat about what she saw. Does she arrive at the most reasonable conclusion [pp. 111–12]? Do you agree with her decision?

10. Consider the list of possible suspects: who seems most likely to have murdered Mark—Neil? Johnny Sanderson? Minty Auchterlonie? How reliable is Isabel’s intuition about these characters?

11. It is Neil who comes to Isabel and tells her of Mark Fraser’s knowledge of insider trading at his firm [p. 117], thus turning the case into an investigation of a murder. How surprising is the ultimate revelation of how Mark died, and why? How is the crime’s solution linked to the theme of truth and honesty?

12. What sexual undertones are revealed in Isabel’s thoughts about Jamie [pp. 127, 133], her thoughts about the reason for Cat’s preferring Toby to Jamie, and her helpless attraction to John Liamor? Why are these undercurrents so prevalent, and how are they tied to the ongoing threads of the story?

13. The Edinburgh setting is a crucial element of The Sunday Philosophy Club. It is a city where respectability is highly valued, but, according to Isabel, is also built on hypocrisy: “Respectability was such an effort though, and there were bars and clubs where people might go and behave as they really wanted to behave, but did not dare to do so publicly” [p. 55]. Edinburgh is also associated with philosopher David Hume, who wrote An Enquiry Concerning the Principles of Morals, among other books. Is Isabel an exemplary product of Edinburgh’s Protestant bourgeoisie, or not? What aspects of her life, or her character, place her in the position of outsider [p. 206–7]? Who in the text best represents traditional Scots respectability?

14. How would you characterize Isabel’s sense of humor? Is she a companionable narrator? If so, what qualities make her sensibility satisfying for a reader?

15. How is The Sunday Philosophy Club not typical of the mystery genre? How central to the reading experience is the mystery of how and why Mark Fraser died? Are other aspects of the plot equally interesting?

16. Readers of The Sunday Philosophy Club, the first novel in a new series, have the pleasure of speculating on how the characters and plots introduced here may be developed in the books that follow. What would you like to see happen in the future? If you have read Smith’s No. 1 Ladies’ Detective Agency novels, how might the Isabel Dalhousie series follow similar lines? How might the very different characters and settings influence the development of this new series?

Alexander McCall Smith was born in Rhodesia (now Zimbabwe) and was a law professor at the University of Botswana. He lives in Scotland, where he is a professor of medical law at Edinburgh University. In his spare time he is a bassoonist in the RTO (Really Terrible Orchestra).