All the Pretty Horses Reader’s Guide 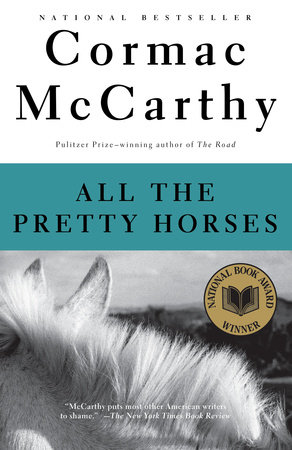 All the Pretty Horses Reader’s Guide

The questions, author biography, and reading list that follow are intended to enhance your group’s reading and discussion of Cormac McCarthy’s All the Pretty Horses. We hope that they will provide you with new ways of looking at–and talking about–a novel that won both the National Book Award and the National Book Critics Circle Award in 1992 and that has established McCarthy as a writer whose popularity now approaches his critical reputation.

At once a Western, a picaresque adventure, and a coming-of-age novel, suspenseful, wryly funny, and elegiac, All the Pretty Horses is the story of John Grady Cole, the last of a long line of west Texas ranchers. Upon his grandfather’s death and his parents’ divorce, the sixteen-year-old Cole finds himself landless, penniless, and possessed of skills that mean nothing in a country transformed by highways and a world war, where cowboys are as doomed and marginal as the Indians they once displaced. With his friend Lacey Rawlins, John Grady sets off for Mexico. They have no idea what they will find there: on their map, the area south of the Rio Grande is blank. They have between them two horses, a rifle, and their bedrolls. The year is 1949.

In the months that follow the two boys–who are soon joined by a third, the unlucky Jimmy Blevins–will journey backward in time while simultaneously going forward into a precocious and saddened manhood. They will find their way to a place where a horse is still a thing of value and breaking one is considered a worthy feat, a place where love can still burn like a cold fire. But in Mexico love also has the power to destroy a reputation, and one can encounter obstacles of medieval severity. Stealing a horse–even one that is by all rights his own–can get a man killed. Or subject him to ordeals that amount to nothing less than the death of his former self.

1. All the Pretty Horses opens with one death–that of John Grady’sgrandfather–and ends with the death of the family servant called Abuela,"grandmother." (At the novel’s end, John Grady also learns that his father has died.) How do these deaths impel the novel’s plot? What larger meanings do they suggest?

2. What other events in this novel occur more than once? How does McCarthy use repetition as a structuring device?

3. How does the author establish John Grady’s character? How has he changed by the novel’s end? At what points in the book do we see him change?

4. What attributes does McCarthy seem to value in his characters, and how can you tell he does so? Do these traits always serve them well, or are the boys in All the Pretty Horses victims of their own virtues?

5. On the hacienda an old man named Luis tells the boys that "the horse shares a common soul and its separate life only forms it out of all horses and makes it mortal…that if a person understood the soul of a horse then he would understand all the horses that ever were" (p. 111). "Among men," Luis continues, "there was no such communion as among horses and the notion that men could be understood at all was probably an illusion." How are these statements borne out or contradicted within the novel? To what extent does the author allow us to "understand" his horses, while keeping his human characters psychologically opaque? What sort of contrasts does McCarthy draw between the communal soul of horses (see especially pages 103-107) and the profound solitude of men? What role, generally, do horses play in this book?

6. On page 89 Rawlins says: "A goodlookin horse is like a goodlookin woman…They’re always more trouble than what they’re worth." How does this statement foreshadow events to come? Where else in the novel do casual statements serve as portents?

7. How does the author establish the differences between the United States and Mexico? How do their respective inhabitants seem to view each other?

8. Alejandra’s aunt offers two alternative metaphors for the workings of destiny, comparing it both to a coiner in the moment he places a slug in the die and to a puppet show in which the strings are always held by other puppets (pages 230-231). Which of these metaphors seems more apt to the narrative as a whole? Is what happens to the boys in the course of the novel the result of character or fate?

9. Do the boys’ journey and subsequent ordeals ever seem foolish, futile, or anachronistic? If so, how does McCarthy suggest this?

10. All the Pretty Horses is spare in exposition (note the economy with which McCarthy establishes John Grady’s situation at the book’s beginning) yet lavish in the attention it devotes to scenes and details whose significance is not immediately clear (note the description of the cantina on page 49 and the scene in which John Grady and Rawlins buy new clothes on pages 117-121). Why do you think the author has chosen to weight his narrative in this way?

11. Although John Grady and Rawlins are innocent of stealing horses, McCarthy suggests that they are culpable of other crimes. At different points in the book he compares them to "young thieves in a glowing orchard" (p. 31) and "a party of marauders" (p. 45). When John Grady makes love to Alejandra, we are told that it is "sweeter for the larceny of time and flesh" (p. 141). What kinds of theft might McCarthy be writing about? Might the boys’ suffering be seen as warranted by earlier transgressions? What sort of moral system applies within the universe of this book?

12. Is All the Pretty Horses a violent book? How do the novel’s characters feel about the deaths they cause? At a time when graphic and gratuitous descriptions of mayhem are standard in much popular fiction for purposes of mere shock and titillation, does McCarthy succeed in restoring to violence its ancient qualities of pity and terror? How does he accomplish this?

13. What role does history play in McCarthy’s narrative? To what extent are his characters products of a particular era?

14. Although the occurrences in All the Pretty Horses are, strictly speaking, plausible and its human voices, in particular, are nothing if not realistic, the book also contains a strong mythic component. How, and where, does McCarthy introduce this? What specific myths and fairy tales does the book suggest?

Cormac McCarthy was born in Rhode Island in 1933 and spent most of his childhood near Knoxville, Tennessee. He served in the U.S. Air Force and later studied at the University of Tennessee.

McCarthy’s fiction parallels his movement from the Southeast to the West–the first four novels being set in Tennessee, the last three in the
Southwest and Mexico. The Orchard Keeper (1965) won the Faulkner Award for a first novel; it was followed by Outer Dark (1968), Child of God (1973), Suttree (1979), Blood Meridian (1985), All the Pretty Horses (1992), and The Crossing (1994). The last two books are part of McCarthy’s Border Trilogy.

Ragtime
Back to Top