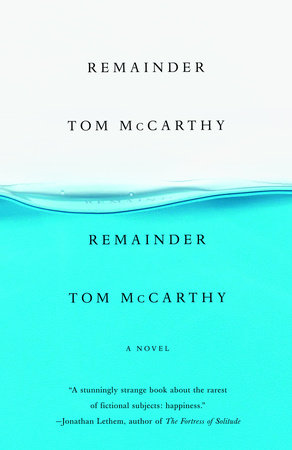 “A stunningly strange book about the rarest of fictional subjects, happiness.”
—Jonathan Lethem, author of The Fortress of Solitude

The introduction, discussion questions, and suggestions for further reading that follow are designed to enhance your group’s discussion of Remainder, Tom McCarthy’s brilliant and unsettling first novel. In this mesmerizing and quietly shocking debut, Tom McCarthy takes as his premise an event everyone has dreamed of—sudden and spectacular wealth—and develops it in ways that are both marvelously inventive and deeply disturbing.

When the unnamed narrator of Remainder is given eight and a half million pounds in a settlement for an accident that left him in a coma for several months, he is at first uncertain how to spend the money. The conventional options— charity, self-indulgence, etc.—don’t appeal to him. Because of the brain damage he’s suffered, he has had to relearn even the simplest movements like eating or walking, mastering each of the many separate maneuvers required to perform actions that most people never think about. What he wants most of all is to regain the ease and naturalness that he admires in such movie stars as Robert DeNiro. He becomes obsessed with attaining that kind of naturalness, the feeling of being real, and when he sees a crack in a bathroom wall that reminds him of a house where he felt most real, he decides he must re-create it down to the smallest detail, including each of the inhabitants he remembers: an old woman cooking liver, a man fixing a motorbike in the courtyard, a pianist practicing Rachmaninov in the apartment below him, black cats on the red-tiled roof of the building behind his own. With his nearly unlimited resources and the help of Naz Vyas of a company called Time Control, the narrator buys a building, renovates it to fit his memory, and hires re-enactors to play the roles of the people he remembers. But even this elaborate realization of his fantasy doesn’t satisfy him completely. He wants to re-enact more and more scenes—fixing a tire in a garage, the drug-related murder of a man near his former home, and a bank robbery that has yet to happen. With each re-enactment, however, his obsession only grows stronger until the lines between fantasy and reality become dangerously blurred.

With a relentless nightmare logic, McCarthy follows his narrator’s obsessions to their unexpected but inevitable conclusion. Along the way, readers are subtly invited to think about some of the most perplexing aspects of the human condition—the urge to relive the past, to control the flow of time, to live in a fantasy world in order to feel more real. Remainder and the remarkable story it tells will remain vividly alive in the reader’s imagination long after the last page has been turned.

1. Why might McCarthy have chosen the word “remainder” for his title? What particular resonance does the word have in the context of the novel’s themes of repetition, re-enactment, and things left over?

2. In the second paragraph of Remainder, the narrator remarks that “Minds are versatile and wily things. Real
chancers” [p. 3]. In what ways does the novel demonstrate the truth of this statement?

3. In what ways is Remainder an unconventional, shocking, and troubling novel? What expectations does it either frustrate or satisfy in unexpected ways?

4. “No Doing without Understanding: the accident bequeathed me that for ever, an eternal detour” [pp. 22–23]. Why does the narrator find this condition so intolerable?

5. In order to create the authentic experience he craves, the narrator realizes that he’d “have to buy a whole building, and fill it with people who’d behave just as I told them to” [p. 69]. How does the use of the artifice and a controlled environment create a feeling of naturalness? What does that paradox reveal?

6. The mysterious “councillor” who appears late in the novel asks what purpose the narrator’s elaborate
re-enactments serve—are they art, or perhaps a kind of magic, or shamanic performances? Dr. Trevellian suggests that the narrator is seeking a condition that will generate the mind’s own opiates. The narrator himself believes that he is trying to feel more “real” [pp. 237–240]. Which of these explanations seems most convincing? Are there other ways of understanding the narrator’s bizarre obsessions?

7. In what ways does the narrator’s obsession with controlling time—reliving the past, creating a self-contained world where he can act as a god over people and events—reflect desires that, to one degree or another, most people feel? Is the need to control an inherent part of the human condition?

8. Remainder is a realistic novel and yet it describes actions that seem impossible. How does McCarthy manage to make the more fantastic elements of the novel believable?

9. How does the relationship between the narrator and Naz change over the course of the novel? Why does Naz end up in a catatonic state?

10. The narrator thinks of the man gunned down on Belinda Road, “he’d done what I wanted to do: merged with the space around him, sunk and flowed into it until there was no distance between it and him—and merged, too, with his actions, merged to the extent of having no more consciousness of them. He’d stopped being separate, removed, imperfect. Cut out the detour” [pp. 197–198]. Why does the narrator find this “merging” so fascinating? To what extent is this a universal desire?

11. The phrase “Everything must leave some kind of mark” is repeated several times throughout the novel. What is the significance of this statement?

12. The narrator kills Robber Re-enactor Two, he says, “because I wanted to,” and is fascinated by the blood coming from the body: “Wow, look at it. It’s just a . . . thing. A patch. A little bit repeating. . . . Isn’t it beautiful?” [pp. 299–300]. Why isn’t he able to feel any empathy for the man he has just killed? Is the narrator himself, by the end of the novel, beyond the reader’s empathy?

13. The novel ends with the narrator forcing the pilot to keep flying back and forth, creating vapor trail that describes a figure eight in the sky and achieving a state approximating pure stasis. Why does this give the narrator such pleasure? How is this flight likely to end? With a deadly crash or a return to land and incarceration?

14. Can Remainder be read as a kind of parable of the human condition? If so, how?

Tom McCarthy was born in 1969 and lives in London. He is known for the reports, manifestos, and media interventions he has made as General Secretary of the International Necronautical Society (INS), a semi-fictitious avant-garde network. Remainder is his first novel.