The Firebrand and the First Lady Reader’s Guide 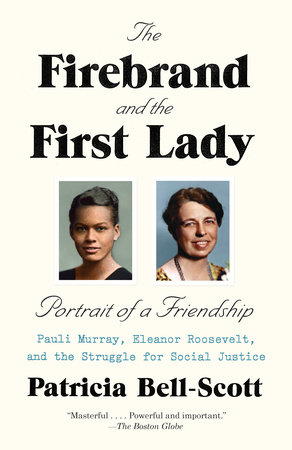 The Firebrand and the First Lady Reader’s Guide

print
The Firebrand and the First Lady Reader’s Guide

This guide has been designed to aid in your reading group’s discussion of Patricia Bell-Scott’s The Firebrand and the First Lady.

A groundbreaking book—two decades in the works—that tells the story of how a brilliant writer-turned-activist, granddaughter of a mulatto slave, and the first lady of the United States, whose ancestry gave her membership in the Daughters of the American Revolution, forged an enduring friendship that changed each of their lives and helped to alter the course of race and racism in America.

Pauli Murray first saw Eleanor Roosevelt in 1933, at the height of the Depression, at a government-sponsored, two-hundred-acre camp for unemployed women where Murray was living, something the first lady had pushed her husband to set up in her effort to do what she could for working women and the poor. The first lady appeared one day unannounced, behind the wheel of her car, her secretary and a Secret Service agent her passengers. To Murray, then aged twenty-three, Roosevelt’s self-assurance was a symbol of women’s independence, a symbol that endured throughout Murray’s life.

Five years later, Pauli Murray, a twenty-eight-year-old aspiring writer, wrote a letter to Franklin and Eleanor Roosevelt protesting racial segregation in the South. The president’s staff forwarded Murray’s letter to the federal Office of Education. The first lady wrote back.

Murray’s letter was prompted by a speech the president had given at the University of North Carolina, Chapel Hill, praising the school for its commitment to social progress. Pauli Murray had been denied admission to the Chapel Hill graduate school because of her race.

“Does it mean that Negro students in the South will be allowed to sit down with white students and study a problem which is fundamental and mutual to both groups? Does it mean that the University of North Carolina is ready to open its doors to Negro students . . . ? Or does it mean, that everything you said has no meaning for us as Negroes, that again we are to be set aside and passed over . . . ?”

Eleanor Roosevelt wrote to Murray: “I have read the copy of the letter you sent me and I understand perfectly, but great changes come slowly . . . The South is changing, but don’t push too fast.”

So began a friendship between Pauli Murray (poet, intellectual rebel, principal strategist in the fight to preserve Title VII of the 1964 Civil Rights Act, cofounder of the National Organization for Women, and the first African American female Episcopal priest) and Eleanor Roosevelt (first lady of the United States, later first chair of the United Nations Commission on Human Rights, and chair of the President’s Commission on the Status of Women) that would last for a quarter of a century.

Drawing on letters, journals, diaries, published and unpublished manuscripts, and interviews, Patricia Bell-Scott gives us the first close-up portrait of this evolving friendship and how it was sustained over time, what each gave to the other, and how their friendship changed the cause of American social justice.

1. Pauli Murray was 24 and Eleanor Roosevelt was 49 when their paths first crossed in 1934 at Camp Tera. What aspects of the camp bore ER’s imprint? Why did Murray have fond memories of the camp positive, despite her difficulties with the camp director who expelled her?

2. Pauli Murray’s initial letters to Franklin and Eleanor Roosevelt were protest statements against the whites-only admission policy of the University of North Carolina, the humiliation of unemployment, and a segregated benefit at the Keith Theatre in Washington, D.C. How did Murray’s letters influence ER’s response to racial discrimination? How did ER’s response affect Murray?

3. How did the University of North Carolina’s rejection of Murray’s application for admission to the graduate school, her arrest in Petersburg, Virginia, for refusing to move to the black section of a Greyhound bus, and her work with the Workers Defense League as field secretary for the Odell Waller campaign impact her life?

4. The NAACP twice refused to handle the appeals for discrimination cases in which Pauli Murray was a plaintiff. Why?

5. During the course of their long friendship, Eleanor Roosevelt shared Pauli Murray’s opinions with Franklin Roosevelt, members of his administration, opinion-makers, and the readers of “My Day.” Identify one of the issues that seemed closest to ER’s heart?

6. Murray suspected that the prejudice and discrimination she faced because of her race, sex, and sexuality thwarted her professional advancement and contributed to her marginality in the historical record? What do you think?

7.Murray was a self-described individualist and temperamentally shy. She also had a thyroid disorder that caused mood swings. How might these factors have frustrated her relationships and ambition?

8. How did the early life experiences of Pauli Murray and Eleanor Roosevelt influence the kind of leaders they became?

9. The campaign to save the life of Odell Waller was unsuccessful. However, it fostered an alliance between Pauli Murray and Eleanor Roosevelt that became a turning point in their budding friendship. What aspects of the case drew them together, and why? Do you see any parallel between the Odell Waller case and the contemporary debate about the interrelationship of race, class, voting rights, and criminal justice?

10. Both Pauli Murray and ER were women of faith. How did this influenced their actions?

11. Pauli Murray said she went to Howard University Law School intent on becoming a civil rights lawyer and she graduated “unabashed feminist as well.” How did the law school experience influence her thinking?

13. Pauli Murray coined the term “Jane Crow.” Explain what she meant by this.

14. The student protests Pauli Murray and her fellow Howardites mounted to desegregate Washington, D.C. restaurants were a model for the lunch counter sit-ins of the 1960s. What common strategies did the two groups share?

15. Why and how did Eleanor Roosevelt’s support of African Americans, especially during World War II, create tension in the White House, resentment from the administration’s enemies, and admiration from blacks and progressives?

16. The author has found no correspondence in which Murray discussed her sexuality with Eleanor Roosevelt. Do you think ER may have figured this out? If so, why?

18.  Explain the intellectual and personal connections Murray had to the argument and people involved in the U.S. Supreme Court’s historic Brown decision.

19. How did McCarthyism touch Pauli Murray and her friends?

20. On what issues did Pauli Murray and Eleanor Roosevelt agree and disagree regarding the 1956 Adlai Stevenson presidential campaign?

22. What were the benefits, as well as the challenges Murray faced as a junior associate at the firm of Paul, Weiss, Rifkind, Wharton and Garrison?

23. What made Pauli Murray’s partnership with Irene Barlow the most satisfying relationship of her adult life?

24. How did Murray’s expectations of Africa measure up against her experience?

25. How did Eleanor Roosevelt’s response to the student movement of the early 1960s compare to her response to youth activists in the 1930s and 1940s when she was first lady?

26. Did Pauli Murray and Eleanor Roosevelt differ in their view of John F. Kennedy?

27. Eleanor Roosevelt died in November 1962, four months after Murray’s last visit to Val-Kill. Describe how Murray sought to honor her friendship with ER and keep the first lady’s legacy alive until her own death in July 1985.

28. What is Pauli Murray’s lasting contribution to the struggle for women’s equality?

29. The file the FBI created on Pauli Murray contained a number of accusations about her affiliations and her character? How were they used against her?

30. Why did Pauli Murray become a priest and how did she define her mission?